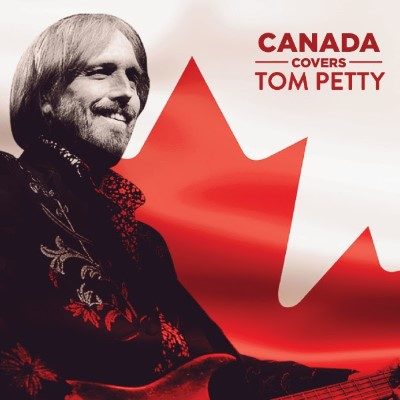 Canada Covers Tom Petty, a collaborative album/playlist from artists across Canada covering the hits and deep cuts from the incredible – dare I say near flawless – body of work from the late legend himself. While Petty passed away on October 2nd, 2017, his legacy shines among the brightest of stars and this compilation, released on what would have been his 68th birthday, is simply a reflection of that.

Over the course of it’s twenty-one tracks, Canada Covers Tom Petty takes a largely acoustic direction very much in tone with much of the indie music of today. Opening with covers of “Crawling Back To You” and “Mary Jane’s Last Dance” from Sweet Alibi and Kennedy Road, respectively, the tone of Canada Covers Tom Petty is set early to the tones of modern indie acoustic music with a touch of rock and pop sensibilities. The latter of the two is especially impressive in Kennedy Road’s use of intertwining vocal harmonies. Jadea Kelly’s cover of “Wildflowers” is another example of a tribute that is simply beautiful with an adaptation that is even more stripped down, bare, and vulnerable than the original.

That being said, Canada Covers Tom Petty is often at it’s best when artists break from this trend. Dave Allen’s smoky blues cover of “Don’t Fade On Me” – embracing a rich sense of darkness over a sparse soundscape – Matt Epp and Christina Martin’s faithful duet of “Stop Draggin’ My Heart Around” – originally recorded with Petty and Stevie Nicks – Marla Brennan’s pop-infused “Into The Great Wide Open”, and Espanola’s “You Don’t Know How It Feels” – resting somewhere between The Heartbreakers and The Band all stand out as strong exceptions which stray from the main direction of the album. The strongest track, however, would have to be The Red Hill Valleys’ cover of “Love Is A Long Road”. Paired with a retro music video, the song packs a raw sense of energy that is largely absent from the rest of the covers with the original synths replaced with a warm piano. The band is tight and follows the original largely note for note but brings a country flair to the song through Chelsea McWilliams’ incredible lead vocals which sound as if Shania Twain was singing Petty.

While it is clear that not all covers are equal, Canada Covers Tom Petty is an enjoyable compilation that pays tribute to a legend in a manner that is, when at it’s best, beautiful. As someone who rushed out to get a tattoo in memory of Petty shortly after he passed, Canada Covers Tom Petty resonates as a wonderful celebration of the life and music of Tom Petty. It is also worth noting that the release comes ahead of a tribute concert hosted by Jadea Kelly And The Black Pearls December 20th, at Toronto’s Dakota Tavern that will feature special guests Molly Brown, Espanola, Matt Epp, The Slocan Ramblers, Liam Duncan, AARYS, Ben Heffernan, Kennedy Road, and Steve Marriner.