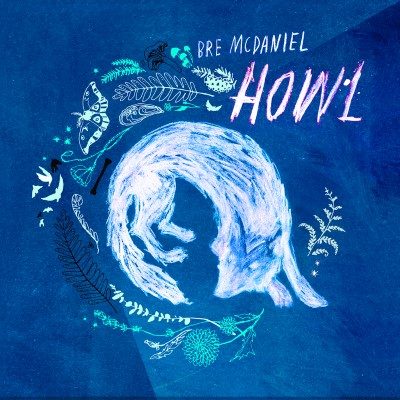 Vancouver, BC-based artist, Bre McDaniel is set to release her album, HOWL to the public on October 26, but Canadian Beats readers have an exclusive. The album, which is a mix of studio tracking and outdoor field recordings in coastal BC is McDaniel’s debut full-length and is said to explore the notion of how we need the tonic of wilderness.

Bre shares on the album,

“I don’t actually remember what first sparked the idea to have field recordings as part of the production HOWL. In some ways it just seemed like an obvious and fun thing to try because all of these nature metaphors and imagery were coming through in the writing. I love nature and I liked the idea of foraging sounds from this environment and would love to explore that more – looping sounds you encounter in normal life into a beat, or collecting very intentional textures of ambient noise. There is waterfall white noise from Lynn Canyon layered in some songs, murmuration flocks of birds sounding like the ocean in others, dying embers of a fire that me and a few close friends are silently gathered around – all these very personal impressions are embedded in the songs. Also I love hearing that in other people’s music, when people sample organic sounds for beats, etc, there’s just something more alive about it.”

Check out the album below, and find out more about Bre in our Five Questions With segment.

Hi. I’m Bre McDaniel and I’m probably not a robot.

I like writing songs that talk to each other. I like thinking about how a recording project can reflect lyrical themes sonically, how what happens in the production process can add to the meaning of the song and what I feel when I perform. My last release was called Light Pollution and I wanted the recordings to have a dark and warm backdrop for other tones that felt more sparkly and ambient; it was important to get a sense of a night sky palette in the layers of tracks to reflect the themes around light, stars and treasure in dark places. This time around for my full length I wanted to include outdoor foraged sounds because it’s called Howl, and a lot of the lyrical metaphors and images are inspired by the BC forest coast landscape, and local stories. So there’s field recordings of white noise from waterfalls, birds, crackling embers, and city noise pollution in interludes and layers in the songs. I also often write based on something I’ve read, so I might pull a song idea from a national geographic article about hunted songbirds in Egypt, a beat poet, the news, or Irish mythology. Musically I have a folk songwriting sensibility but with more wispy soul in my voice, and a bit of the gospel genre’s emotive conviction.

I do have upcoming shows! November 7th is my album release show in Vancouver at The Railway, and I have a few other concerts in Victoria, Abbotsford, and Kelowna in the following weeks. Check my website for details.

On tour, I usually play solo acoustic and electric guitar, or locally with one or two others — electric, voice and layered violin, but my release will be with a 6 piece band. My live performance often includes some storytelling leading into a song or some moment where I feel compelled by the opportunity to link a song to something current going on out in the world or the city. I try to be sensitive to the moment and the atmosphere of the venue. I also like to tell terrible jokes that everyone hates.

I would like you to bop along to Allen Ginsberg’s Song.