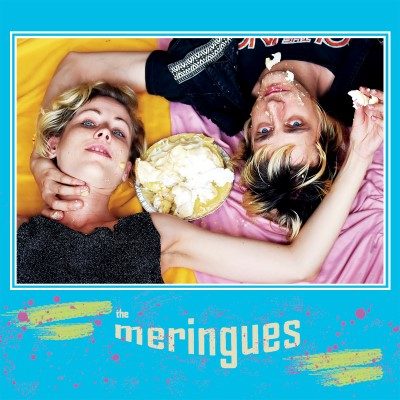 It is a rare delight to find a debut album as sonically cohesive as the recent self-titled release from the Meringues. Short and flawless, this is the sort of record you could play all the way through at a party without complaint. While each track has its own personality and story, they feel like pieces of the larger picture–– the album itself. Matt Rogalsky’s role as both producer and mixing engineer may have aided the record’s consistency. The instrumentals feel refined without ever losing that messy edge.

At the core of the band’s textbook post-punk sound are its animated lead vocalists. Amanda Pants and Ted Evans share singing duties and you’d be hard-pressed to find a more complimentary pair. Pants has that kind of old-school punk-ette voice that would put the cast of Rocky Horror Picture Show to shame. Similarly, the playfully taunting way Evans sings brings to mind Lux Interior from the Cramps. Pants and Evan’s dynamic is what elevates the Meringues from a good band to a great one. They sing to each other both in conversation and in tandem, blurring the lines between the romantic and the platonic. As listeners, we are made witnesses to the ups and downs of this tumultuous relationship with a kind of purposeful ambiguity between reality and performance. The Meringues encourage us to sit back and enjoy the confusion.

Releasing this album in October was a clever choice. I know I’m putting this album on my Halloween playlist and you should too. What better lyrics to put a costume on to than “I know your head’s on backwards/ Howlin’ at the moon/ You’ve got a chip on your shoulder, baby/ It’s what I do/” off of the record’s third track “Deadly December.” Immediately following is “Sunbaked Spider,” a lyrically melancholy reflection on the image of a dead bug told in an upbeat, bass-heavy frenzy. This is the Meringues at their best. They know how to blend camp with sincerity, switching from the silly to the earnest at the drop of the hat. The result is seamless, embodying that classic rock’n’roll spirit without a hint of inauthenticity. The Meringues are definitely a band to watch.