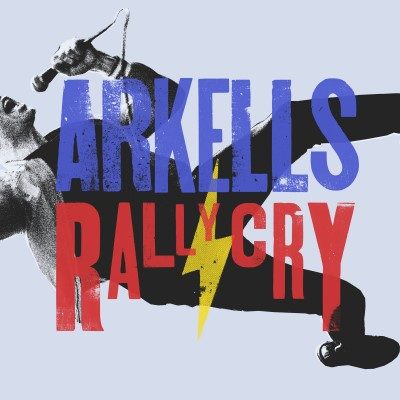 A “rallying cry”, by definition, is a word or phrase, an event or a belief that encourages people to unite in support of a particular group or idea.  Everything leading up to the release of Arkells newest full-length album was never a coincidence. In today’s world where social justice is dominant and speaking up for what you believe in is the norm, this band is the epitome of what everyone else is thinking – starting with the release of “People’s Champ”. A song that outwardly calls on the negligence of a certain leader; they bring together the thoughts of many in a song that simply lays it out all on the table. Rally Cry is an album full of anthem songs that any music fan can get behind.

Another song that seems to be speaking out towards the violence that’s been happening across America and the political arguments that seem to break out all over the media. They captured every feeling they felt in a song that every person listening could relate to on one level or another. They are able to put into lyrics what most of us can’t seem to say out loud. Whether we’re afraid of what others will think or that or opinion doesn’t matter, Arkells wrap it up perfectly in well thought out words and a catchy beat.

But whether or not they’re singing about social change or about “Saturday Night”, you’ll find yourself enjoying every moment of every song. With Rally Cry being their fifth studio album under their belts, Arkells have definitely mastered the art of creating great music with lyrics that actually mean something to everyone who listens to them. Pulling from multiple influences, each track has something a little different that sets it apart from the next. Five albums in, it shows confidence in what they’re doing and nothing will waver what they’ve built over the last ten years.

I can’t (or won’t) pick a favourite track, because they’re all unique in their own aspects. If one did stand out though, it would probably have to be “Only for a Moment’. The older we age, the more we tend to realize we need to slow it down and stop stressing so damn much. Lead singer Max Kerman shed light on the inspiration behind the song, and it made so much sense.

“There’s a line in our tune Come To Light, ‘The underpass would keep us from harm.’ It’s that moment when you’re driving through a rain storm, and you have a second of respite from the chaos outside. I find myself writing and thinking about those moments of calm, and how important they can be. Only For A Moment is an extension of that idea. My friend’s mom was struggling with some oppressive mental health issues. It was tough for everyone in her family. But there was a moment we were out one night, where my friend seemed to leave the trouble behind – just for an hour – and could just enjoy her life. The stress in her face seemed to disappear. And I was happy she could have that.”

2018, while still a few months from ending, has been a hell of a year for the group of guys who came together in Hamilton to write music and create music that people could get behind. Often dubbed (at least from what I hear) as Canada’s band, these guys are “rallying” everyone together through great music and meaningful words. Whether they’re rallying the crowds at their first (and definitely not last) stadium show, singing about political issues that has everyone talking, or hanging out with their fans in a karaoke bar or Union Station in Toronto, they’re definitely encouraging people to unite in support of a particular group or idea.

So if you’re wise, you already pre-ordered Rally Cry way before today, and have been listening to the full album since midnight. If not, you best be saving the album on Spotify, buying it off of iTunes, or heading down to Union Station to hang out with the guys as they sell vinyl editions of their newest hit album. However, you get it, be sure to listen – to really listen – to it and enjoy it as much as I know you will. I don’t know about you, but I’m already anticipating a tour announcement.