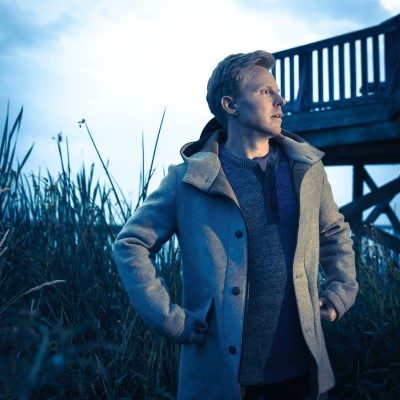 Martin Kerr has released a new single, You’re Amazing – a love song dedicated to his wife. The UK-born and now Canadian based Kerr’s career began on the streets as a performer but his latest album, Better Than Brand New, is the start of a new chapter for this up-and-coming singer-songwriter. The album landed a spot on the Canadian Album Top 10 chart and reached number two on Canadian iTunes album chart.

We chatted with Kerr about his most recent success, his new music, and his upcoming November tour.

Starting as a street performer to now co-writing with major songwriters and performing for thousands of people is impressive to witness. How did those early days impact the career you have now?

Playing on the street was way more fun than I expected. Once I found some good spots and times to play, there would always be someone new that made a real connection with my music that day, and it always led to more good things. It helped me learn to pay attention to my audience and to figure out ways to involve them. I love the challenge of getting people to stop what they’re doing, take a detour out of their day and have a moment that they weren’t expecting.  I love the fact that you can meet all kinds of people, not just the folks that go out to music venues. I did so much busking that now every time I leave the house I meet someone that knows my music, and 90% of the time they say they first saw me playing on the street.  I love finding ways to bring music to people, instead of waiting for them to come to me.

When you perform and write with these major players, what do you take away from their work and their process?

They all have their own style and skills that differ from mine, so it’s fun to see what happens when you mix up those ingredients together. I was a one-man-show for a long time, so it’s really refreshing to do these collaborations and come up with songs I never would have created on my own. Something I’ve really learned this year is that there’s a big difference between performing live and creating a recording. Kinda like the difference between acting on stage or screen. In the studio sometimes you need to be more subtle, and use different tools, because all you have access to is their ears. You can’t tell a story to introduce the song, and you can’t convey emotion with your face or body, so you have to do all that with sounds instead.

Can you tell us about the process behind writing the new single, You’re Amazing?

Depending on how you look at it, the song either took 15 years or 15 minutes to write. Ever since I met my wife (15 years ago) she has been telling me to write a song about how amazing she is…. but I never got around to it! So early this year I was in Australia for a recording project, far away from the snow and ice of home, enjoying the warm weather and the birdsong of the Aussie summer, having my morning coffee in my bare feet and feeling so happy to be there, but also missing my family. I started strumming these chords that felt mellow and groovy in a Jack Johnson kinda way. And then I just started singing a melody that went with the guitar part and some words came to mind. Just for a laugh, I tried rhyming as many words as I could with the first line, and it became really funny. When I came up with the chorus I knew I was onto something, as it’s romantic and cheeky at the same time – a very British turn of phrase but something everyone can relate to. It wasn’t until I trying playing it at a house concert a few weeks later that I realized it was a special song – everyone started singing along on the very first chorus – laughing, crying happy tears, holding hands, dancing…I looked over at my manager and we both thought ‘what the heck is going on here?!’  Turning it into a fully-orchestrated studio version was a whole other journey, but equally as fun. Adding the trumpets was the tipping point for sure.

What do you hope new listeners take away from your music?

I hope it gets stuck in their head in a good way, that they find themselves singing it to each other and smiling ‘til their faces hurt.

Are there any amazing things you would like to accomplish with your career in the near future?

Honestly, for me, it just comes down to connecting with people heart-to-heart. It doesn’t matter where or who, but I love doing that whenever I get the chance to play live. I hope that this song will take on a life of its own and spread around the world somehow – I think it’s the kind of song that people will want to share with their friends and loved ones, because it says something really sweet and sincere, but in a way that’s fun and different instead of cheesy.

You have a few live performances coming up – what has been your favourite part about that experience so far?

I’ve been playing full-time for the last 10 years and must have racked up well over 1000 shows, from garages and cafes to big concert halls, festivals and even a stadium. I’d like to do a few more of those! Opening for Sarah McLachlan was incredible, a really unforgettable day. But no matter where the show is, my favourite part is always meeting the people afterwards and hearing from them how the songs made them feel.