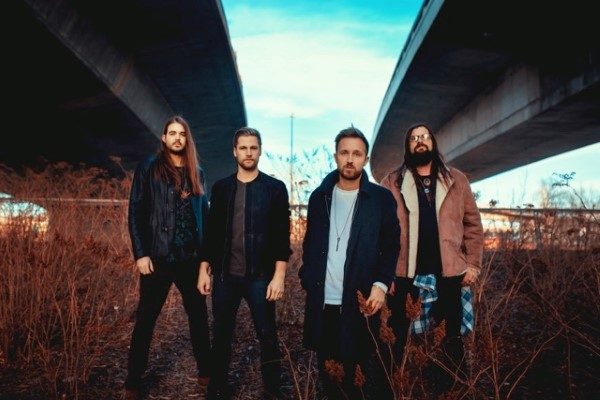 Alberta’s Royal Tusk recently signed to Entertainment One and released their new music video for their hit single, “Aftermath”. The single is off of the band’s upcoming album, TUSK II which is set for release on October 26, 2018. We caught up with the guys of Royal Tusk for our newest segment of Five Questions With, so take a peek at that below and check out the “Aftermath” video while you’re at it!

Hello everyone, my name is Sandy and I’m one of four dudes in Royal Tusk. I’m the commander of the low end, so in other words…I play Bass guitar.

Our music is an amalgamation of 4 dudes in a jam space, each with such different musical backgrounds and upbringings. However, we all share a love of big guitar riffs and heavy rock n roll. This is how some of our songs come together. It all starts with a riff, and we sort of let it grow organically from there.

We are just putting the finishing touches on our rehearsals before we hit the road for a month of tour supporting Pop Evil. This tour will have us going from Montreal, all the way to Vancouver. Personally, I love being on the road, playing a new city every night. What someone who’s never seen us before can expect, is a very high-intensity rock show.  We will for sure give everything we have, every night, to make everyone feel like we do on stage, which is on top of the world.

At the moment it would be “aftermath”. It felt like an eternity waiting to release a new piece of music. This song I feel really captures the intensity and ferocity we are trying to put forward. All the while standing up for issues we feel so strongly about.

This is always a tough question. We spend so much time on the road playing alongside some of the best talents from coast to coast, that it’s really tough to nail down just one. I can assure anyone who isn’t familiar with Canadian music, that they would be hard pressed not to find amazing artists in just about any genre. Anything from Heavy metal to country, from hip-hop to Punk Rock, this country has it all, I know, cause I’ve seen/heard it. So I can’t really nail down the best, but drop me a line anytime and I can fill you in with what I’m groovin’ too at that time!!!