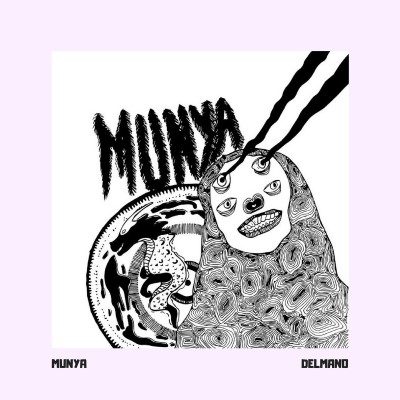 Josie Bolvin, more recognizable as her stage name MUNYA didn’t know how to even make music when she started recording music. Once she found her footing, she set off to create new and exciting music in the form of a trilogy of EPs. Delmano being the second of 3, the first being North Hatley released earlier this year and her unnamed EP to release in early 2019.

Three songs were released on this EP with all different styles throughout. “If I’m Gone Tomorrow (It’s Because of Aliens)” is a melodic ride with a simple beat, transadelic melody throughout with a simple, harmonic voice throughout. For a little over 2 minutes, the song can send chills through you when listening with headphones with the variety of sounds you hear throughout.

“Hotel Delmano” reminds me of the band Gorillaz. An insanely catchy drum beat with the melodic sounds throughout, I was surprised when she started singing and it was in French. As someone who cannot speak or read French well, it was harder for me to understand what she was saying but I can tell she was enjoying herself throughout. The song is insanely catchy and regardless of understanding her lyrics or not, it is a very great song.

Finally, we have “Some More”. Similar to “If I’m Gone Tomorrow”, it has a slow, transadelic melody that anyone can move and sway too. Her multiple vocal tracks in the song, ranging from highs to lows are a beautiful mixture of music, bringing back the chills from earlier. The guitar that came in towards the end of the song was surprisingly perfect and added an amazing ending to the song.

As stated earlier, this is the second of her three EP trilogy she will be releasing into next year. MUNYA may not have understood how to make music at first but she has found her footing in a genre she fell into naturally.