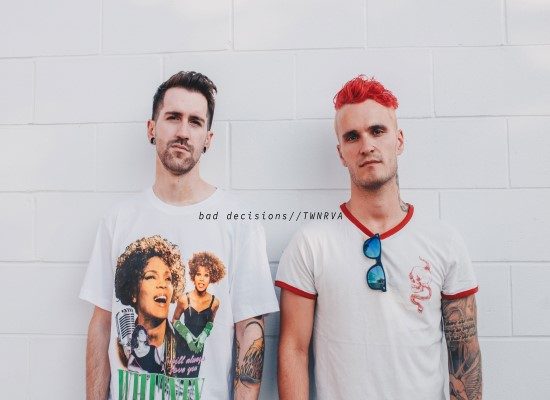 Toronto, ON-based dark pop duo, TWNRVA (pronounced “Twin Rova”) is made up of Devin Moody (vocals) and Andrew Falcao (guitar/ vocals). The two recently made their debut with their single and video, “Bad Decisions“. You may recognize them from their former pop-punk band, July, but now you will come to know and love TWNRVA, I’m sure of it.

Check out the video below, and find out more about the duo in our Five Questions With segment.

We are a new pop band from Toronto called TWNRVA (read as Twin Rova). The band consists of only two members, Devin Moody (Vocals) and Andrew Falcao (Guitar/Vocals).

Our music is heavily inspired by the sounds of ‘90s pop music but with our own spin on it. We grew up loving bandstand artists like Backstreet Boys, NSYNC, Britney Spears, Snoop Dogg, Robyn and anything produced by Max Martin, so we decided to use those familiar sounds in our new music. Andrew and I were also members of a pop-punk band called July and are influenced by bands like Blink-182, Fall Out Boy and Panic! At The Disco. If you listen closely, you can hear how we’ve tied all these influences together.

We are currently in the process of planning our live show. From the beginning of this project, we promised each other that we would be different from other live bands. We want to put on a show and not just be another band standing up on stage playing their songs. We have been experimenting with programmed lights, unique ‘90s themed stage design and even choreography. We are aiming to be playing shows in Nov/Dec this year!

Bad Decisions” for sure. “Bad Decisions” is a song that really ties our whole sound together and keeps people on their toes for what’s next for us.

SO many to name but we are going to give a shout out to some AMAZING up-and-comers. Taabu (@taabumusic), Chiara Young (@chiarayoung) and Navigate The Sky (@navigatethesky).