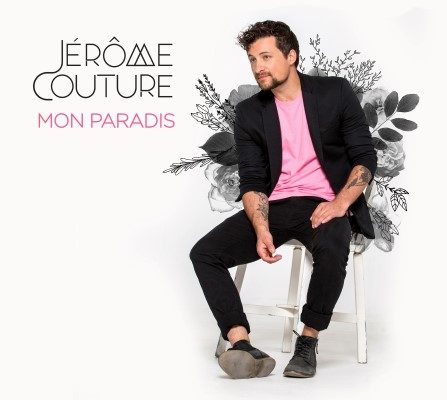 Mon paradis (My Paradise) is the third and newest album release from Québécois artist Jérôme Couture. Available now instore and online through most major music retailers, the album is an eleven track testament to Couture’s hard work and growing popularity. Couture has grown as an artist, songwriter, and performer since the release of his second album Gagner sa place (2016) and his self-titled debut Jérôme Couture (2014).

Couture is passionate about his music. Writing and co-writing all of his own material allows Couture to have creative control and to focus on his musical direction. Using influences of pop, funk, soul, rhythm and blues, and everything in-between to create his own unique sound helps set Couture apart from other artists on the radio today. Couture also teamed up again with musical mentor and friend Marc Dupré to create two solid tracks on the album; “100 x plus grand” and “Prier encore.” Both tracks were released as the albums lead singles; “Prier encore” made its debut in April 2018 and “100 x plus grand” was recently released in September giving fans a taste of what to expect when listening to Mon paradis.

The album comes off strong from the first note. Mon paradis opens up with the latest single and first track “100 x plus grand.” The song talks about aiming high and going after your goals and dreams. “We’re gonna change the world” becomes the anthemic theme which echoes throughout the song. It is a fun and catchy, yet inspirational song which can speak volumes to everyone who gives it a listen. This song is sure to get you moving and singing along as you become caught up in the passion of the song. Couture has also released a special acoustic version of his new song as well for his fans to enjoy.

One of my favourite tracks on the album is “Prier encore.” I loved the sound of this song and the different musical elements within the track. It is upbeat and Couture’s vocals are smooth and infectious. The official music video for “Prier encore” was released earlier as well and showcases Couture performing the song. Definitely one of the songs on this album I kept on repeat and added to my playlists.

“Mon vieux,” “Julia,” and “Te le dire” are just a few more of the songs that I enjoyed on the album. I loved how delicate “Julia” was compared to the rest of the album. It was a little mellower compared to some of the other songs but still carried on with a good beat. The lyrics encourage Julia to advance and follow her heart and remember how beautiful she is.

Another one of my favourites on the album was the title track “Mon paradis.” Its acoustic and breezy style is really a beautiful setting and showcases Couture’s softer vocals. Couture really pours a lot of emotion into this track and told Canadian Beats just how special the song was to him; “I am proud of each song, but “Mon paradis” is so personal for me and I am really proud of this song. With my voice, my words, and my music it’s one of my favourites and it is one I like to listen to myself.”

I really got into the whole album while listening to it. Mon paradis is super easy to listen to and enjoy. For Couture, the music seems to come out naturally. Couture has a unique but consistent style with his artistry. His songs are enjoyable and are always the right level of energy for the lyrics and the stories behind them. “Sur le rythme, “Quand tu chantes,” “C’est toi l’amour,” “Au bon moment,” and the super fun track “Never let you go” keep you engaged and round out the rest of the album. Many of these songs have instantly become new favourite songs to listen to.

Couture gave a preview of the new album during a live performance in Montreal on Tuesday, October 9, 2018, at La Tulipe theatre. Performing selections from the new album Couture electrified the audience not only with the new music but charisma and high energy dance moves. Celebrating the release of the album, it was a fun night of new music and excitement leading up to the official release. The fans were into the new songs and the growth Couture has done as a performer shone through.

Mon paradis gives Couture a chance to show off his musical skills and create songs he knows his fans will enjoy. It really is a fun album that sends out a lot of positive messages behind the lyrics, and keeps you dancing. Couture’s star continues to shine bright and gets a little brighter with the release of Mon paradis. With a couple tour dates already booked in October and more tour dates to be added with the release of the album, you check out the new album for yourself and hopefully you can catch Couture on the road near you.