Five Questions With Chain of Lynx 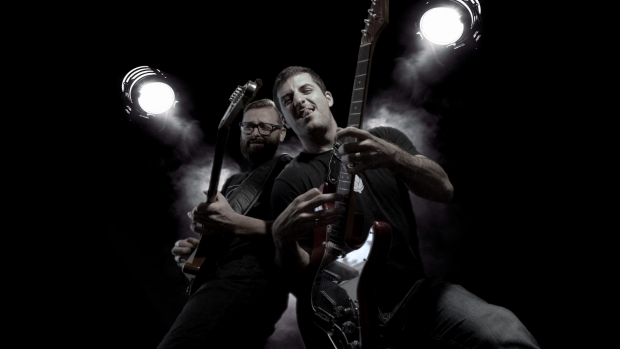 Photo Supplied by Chain of Lynx

Newfoundland duo, Chain of Lynx recently released a time-lapse video for their single, “Glasseye”. We caught up with them for our newest segment of Five Questions With, so check it out and watch the video below.

Hey readers – Matt and Neil here from Chain of Lynx!  We’re a couple of Newfoundlanders with a very eclectic taste in music.  We tend to describe ourselves more as a “music project” than a band…

Our current goal is to release a song a month, collaborating with as many different artists/musicians as we can.  That’s the whole idea behind adding to the “Chain of Lynx” – it’s a collective noun like a “Murder of Crows”.

Also – since this is all for fun, we release the stems for our songs so that people can practice mixing/mastering or sample them in their own projects!

Eclectic and dynamic.  We’re definitely rooted in rock, but we’re only four songs in and we’ve already covered alternative, psychedelic, folk and metal.  We know that this can alienate listeners who come for a distinct genre, but we just can’t help ourselves!

Our songwriting method is.. unorthodox.  We live approximately 8 hours drive from one another, so face-to-face writing time is pretty limited.  We’ve set up modest recording rooms in our houses and we send song ideas back and forth. We add sections and layers to each other’s tracks until they become something that feels uniquely us.  Helps us work around the soul-crushing timesuck that is “adulthood.”

We’d love to hear about the inspiration behind “Glasseye”, care to share?

For “Glasseye” we got to collaborate with Brandon Hopkins from High Point Audio/Cabbages & Kings – he mixed it and offered to play drums.  He’s spectacular and we highly recommend you check out his work! The single art is an amazing custom painting by Cody Best.

The song started as the intro riff and wah solo you hear at the beginning.  Named it “Glasseye” because… well who the hell knows why instrumentals have the names they do.   Neil looped it, distorted it and sent back some vocals inspired by the name.  It’s surprisingly common that we write lyrics based on the cool title.  It sounds like Jack from 30 Rock starting with the catchphrase and working backwards – but it often works!  Beep-beep ribby-ribby!

This is a song about that little jerk inside your head.. and how irritating it is that it’s usually right.  Deep down you can foresee the consequences of an action (or inaction) but you fool yourself into believing you can dodge them.  Maybe you can’t trust your mind’s eye… maybe it’s hazy, fractured glass.

Probably “Future Comes to Past”.  It’s a groovier track but it has enough oomph and personality for someone who’d normally listen to something heavier.  It’s also unique enough to wonder what else we’ve got up our sleeves.

May as well listen to “Glasseye” while you’re here though.

Matt:  That’s why we love Canadian Beats!  Locally, I’m in awe of the songwriting and production value of the new albums by Paul Brace, Another North and Waterfront Fire.  Nationally, I absolutely love Big Wreck and Jon Lajoie’s new project Wolfie’s Just Fine.  Plus I’m a huge Terminator nerd – hence, our son Connor.

OH – and definitely check out everything ever by The Darcys…

Neil: Living in rural Newfoundland, I don’t get too much exposure to the live music scene in St. John’s, but I like what I hear. I’d have to ditto Matt on Big Wreck – just epic. I also really love what Mac DeMarco and Alvvays have been doing. They were both big influences on “Future Comes to Past”.