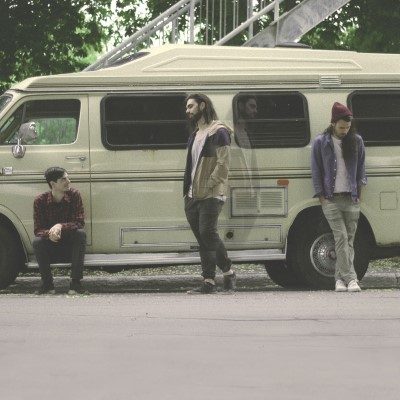 Montreal, QC-based alternative-electronic artist SOMBRA is the project of Matthew Dessner, who is a vocalist, songwriter and producer. SOMBRA has released a new single, “Normal Human” with accompanying an music video. “Normal Human” is a follow up to his debut EP which was released last March.

SOMBRA shares on the video,

“The music video was originally adapted from Louise Chauvet & Sebastien R. Teller’s short film entitled, “The Chase” and it, like the song explores human nature and the inability to disconnect in the midst of a pushing and pulling relationship.”

Check out the video below, and find out more about SOMBRA in our Five Questions With segment.

Hey everyone! I’m Matt from SOMBRA and I’m an alternative-electronic singer/songwriter and producer from Montreal, Quebec. SOMBRA started as a solo, stress-free, side-project for me to explore my own musical ramblings without the hassles that come along with live bands, organization, touring, et cetera. But that mentality only lasted a month or so. After releasing a debut EP in March, I was itching to get back into the live music scene and luckily enough, I met some great musicians that turned SOMBRA into what it is today. This new single “Normal Human” is the first studio recording we’ve released in this new formation and we’re stoked to keep the creativity flowing.

Our sound draws inspiration from 80s electronic groups such as Depeche Mode and Nine Inch Nails with simple lines that work together to create a dark yet vibrant energy. We love to create music that will have you swaying back and forth in a trance, and can suddenly wake you up into some sort of violent dance. Our drummer Kyle, having studied both rock drumming and classical percussion uses his experience from esoteric and contemporary art music to incorporate interesting rhythms into simple, danceable beats. Meanwhile, Henri, our synth player layers heavily textured chords and provides the atmosphere to glue everything together. Catchy vocal lines, distorted beats, heavy guitar sounds and floating synth lines intertwine to create a blend of organized mayhem.

Yup. We’ll be playing a show hosted by Montreal’s KickDrum on Saturday, November 24 at La Vitrola. Details to come, so stay posted to our Facebook for the info. We definitely like opening things up to new interpretations and jams in our live performance, which is fun because it keeps things fresh. You would never expect it when listening to the studio version but we actually end the liver version of “Normal Human” with a hyper distorted stoner-rock 3-minute drone outro. ‘Cause why not? Haha

I would definitely say check out this newest single “Normal Human”. Watch the music video or catch it on any major streaming platform. But also – if you like this, I’d also recommend checking out a live recording we put out in August of a song called “ANIMALS”. We really love the way that one turned out and we’ll be recording it in the studio soon, so its a sign of good things to come!

Like any good Montrealer, I grew up listening to many of those local bands so interconnected within the music scene here: Wolf Parade, Godspeed You! and Malajube to name a few. More recently there is always a SUUNS song stuck in my head but that doesn’t bother me. Add Purity Ring, Half Moon Run, Daniela Andrade and Grimes into the mix and you’ll officially have us hooked on whatever playlist you’re making.