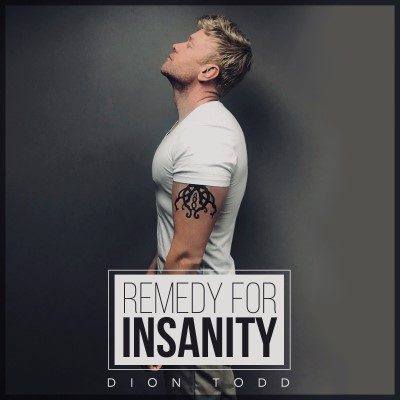 Canadian artist, Dion Todd gained success through the release of his single, “Maybe” back in 1998, which appeared on numerous best-selling pop/dance compilation albums. made his return to the music industry in 2017 with a powerful dance ballad, “Rocketship State of Mind “, which was written and released to support a campaign to bring awareness to human trafficking and domestic abuse. “Rocketship State of Mind” was written by Dion, along with his mother Christine White and Grammy award winner, Tiffany Fred. The lyrics for the song were inspired by the time Dion and his mother spent living in a shelter in St. John’s, NL when Dion was a child.

Now, Dion’s second album is almost completed, and it’s time to share the second single, “Remedy For Insanity” with the world. Co-written, once again with his friend Tiffany Fred, this song talks about crazy love…the kind of love where you can’t eat, you can’t sleep, you basically can’t function.

Check out the single below, and find out more about Dion in our Five Questions With segment.

I’m Dion Todd. Some may remember me from my earlier releases many moons ago! I had a few dance hits that were featured on a couple of MC Mario Dance Compilations (Sony Music), as well as Groove Station 11 (Universal Music). If you’re a fan of listening to way back playback on radio stations, you may still hear those songs being played! I took a fairly long hiatus from music to pursue business interests, as well as going back to school to complete an MBA (Master of Business Administration) at MIT (Massachusetts Institute of Technology). I returned to music last year with a song called “Rocketship State of Mind” which was released to support a non-profit. I wasn’t sure how well I would be received given I took such a long break from music. Needless to say, I was shocked, and thrilled, that the song peaked at #22 on the Canadian Top 100 (ADISQ, Correspondents Anglophone). The song was #1 in New-Brunswick on 97.1 CKRO-FM. I am amazed at how many of my original fans are still out there and supportive of my new music. After working on that song, I realized how much I missed the music industry and decided to delve back into it.

Much of my writing comes from the heart. When I write a song, I write about how I’m feeling at the time. Early on in my music career, much of my music was emotional love ballads. One of the very first producers I worked with suggested my songs would be a good fit for dance music, so we took one of my slow ballads and changed it into an upbeat dance track. And just like that, I found my niche! I think my music goes a step further beyond traditional dance music. I focus more on melodies and lyrics as opposed to the typical electronic sound of dance music with simple melodies and shorter repetitive lyrics. That’s what I love about dance music; I don’t lose the melody and passion of my ballads, and being a dance song just makes it more interesting and more fun to perform. In some cases, even better, because the music style allows the story of a song to have more room to build up to an emotional climax.

I’m currently working on a tour schedule. In the past, I’ve performed in front of crowds of around 20,000. One of the most notable points about my performances is that I sing live.  In an era where lip syncing has become popular, I choose to sing live so I don’t diminish my craft and talent. Most people who hear me sing live say I sound the same, or in some cases, even better than I do on recordings. Anyone can download a song and listen to it; it’s a different experience to hear a song performed live and hear raw talent. Also, my performances are as much about visuals as audio. While I sing live and love to convey the emotion songs bring out, I also perform with a full choreographed show including backup dancers and visual effects.

Good question. I would have to say a song that hasn’t been released yet but will be on my next album. The song is called “I Do What I Like”. There have been many times in my life where people have told me I couldn’t do something, or that I was crazy for trying. In some cases, people even laughed at me for trying. I think many people can relate to this. Nothing is impossible. If Meghan Markle said she wanted to be a princess when she was little, I’m sure people would have laughed, and we know how that turned out! I’ve accomplished many things in my life that people said would be impossible. My song “I Do What I Like” speaks to overcoming people and societal judgments on what you should or shouldn’t do. You only live once, and anything is possible. I never want to look back and have any regrets about something that I should have tried or done, but didn’t.

There is so much talent in Canada, and Canada has produced some of the biggest superstars in the world, and of all time. I’ve always been a huge fan of Celine Dion. Early on in my career, much of my music was fashioned after her style. I love writing and performing power ballads! Celine has had incredible staying power and continues to be relevant today among a huge range of generations. My mother and I had the fortunate pleasure of meeting her, and she is as nice in person as is conveyed in her music and her public persona. Some other artists who are current favourites include Shawn Mendes, Lights, The Weeknd, Drake, and Diana Krall.