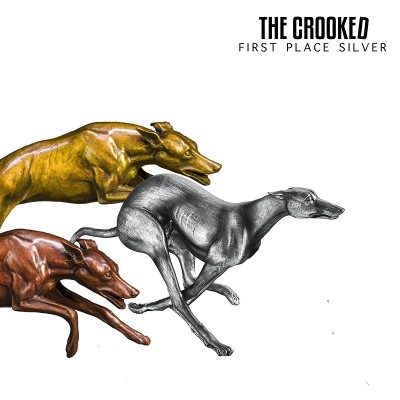 With the release of their latest EP, First Place Silver, Toronto’s The Crooked are setting themselves up to be among the city’s strongest rock bands despite being around for just over a year and a half. First Place Silver is the band’s follow up to their debut EP, The Shoebox Sessions, released earlier this year. The band, consisting of frontman and guitarist J.C. Sandoval – formerly of Die Mannequin – bassist Russ Shipman, lead guitarist Neelesh V, and drummer Dell Orso, shine strong on a unique, distinctive, and ultimately strong sophomore record.

Kicking the album off with the intense lead single, “Dog Days”, The Crooked already set themselves as a modern sounding rock band with Sandoval’s and V’s intertwining guitar lines yet there is a strong sense of pop sensibility in the song’s catchy chorus. The song is simple enough, yet with the band’s use of dissonance and ripping lead lines, the song grows to be something larger than simply another catchy rock song. It helps that the music video is pretty sweet as well. Taking a few steps back in pace and dynamics, The Crooked go into the atmospheric introduction to “Empathy”. Sandoval’s vocals standout here as he leads the band through a track that builds with crunching guitars into a hard-hitting chorus that feels as if it was pulled for the alternative hard rock scene of the late ‘90s.

First Place Silver comes to a peak with “Watch Me Burn”. The song, while certainly the heaviest on the album, features an ever-shifting pulse along with incredible guitars all throughout the song that develops and increase in intensity as the song progresses – along with a fiery solo. Again, with a catchy as hell chorus, there is a raw sense of chaos on “Watch Me Burn” that makes it stand out from the rest of the album as my favourite track.  “Luxury Prison” comes close to replicating the intensity on the previous track, again with a series of impressive guitar lines and Sandoval’s vocals giving yet another strong performance. To close the album, The Crooked added “I Didn’t Know” from The Shoebox Sessions – my favourite track from their debut EP– to give First Place Silver a round five tracks.

All in all, First Place Silver is miles ahead of The Shoebox Sessions. Not only is the production amazing, but the band continues to develop their rich sense of songwriting to deliver an EP that rocks hard while being incredibly catchy that even the most casual of fans could sing along to. What’s more impressive is that this is a record that captures a sound unlike anyone else; in other words, The Crooked have not only found their sound, but they have embodied it so strongly across First Place Silver that they have done what most up and coming artists fail to do: they have created a sonic identity. First Place Silver sounds like The Crooked, and we are all a little better for it. This is a must hear record from an incredible band.