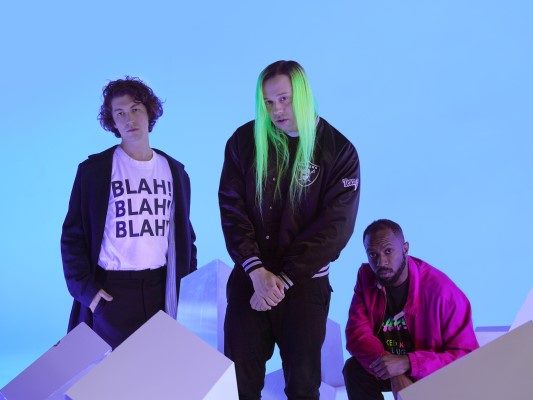 Vancouver Indie-pop group Fake Shark are gearing up for their new EP release this fall, and to kick things off they’ve released their new single “Smile” on September 27. Band members Kevvy, Louis Wu, Tony Dallas, Alex Glassford, and Jake Fox are hoping to follow up the success they had  with their previous 2018 hit “Wake Up” which earned more than 120k streams on Spotify, and an earlier single “Cheap Thrills” was selected for the latest Apple Watch commercial and found its way onto TV shows Dice, and Famous in Love.

This fivesome is building a reputation of groovy indie-pop melodies and dance-worthy bangers. We caught up with the band to find out more about their upcoming EP, and what’s next for Fake Shark.

You guys had a very impressive year last year – Spotify numbers are growing, and you’ve already landed a commercial – how did it feel to have your music embraced in that way?

It’s exciting because we’re still just making music we love, and not compromising anything and it’s being embraced by these mainstream outlets. It’s a dream, really!

I love the concept behind the new single, Smile. Can you tell our readers what the story is behind the song?

I heard an interview with Henry Rollins on Joe Rogan Experience where Rollins was saying he doesn’t crave or need romance or even friendship in his life, and it got me thinking about myself and what I want. He’s always been about artistic output and I’m similar. But, deep down I realized I do need more of a human connection than that. I am capable of loneliness, and I do benefit from close friendship and I do believe in love. But the song was basically dating someone to come into my life and show me its possible.

What can you tell us about the upcoming EP? Was there anything different about the way you approached this record compared to 2017’s Faux Real?

I had an artistic awakening at a writing retreating called socanon the island. It was me and 17 other great writers like Pomo, Joel from Dragonette, Tyler Shaw, Begonia, the Darcy’s…we were writing sometimes 3 songs a day, and I realized I wasn’t questioning myself creatively and the results were better. The day after I got back from the trip, I wrote the skeleton for Wake Up.

Do you have a tour planned after the release?

We’re doing a batch of shows right now with our lady peace, grandson, Coleman hell and glorious sons. We’re figuring out the next bunch of months now.

For anyone listening to you guys for the first time, what do you want them to take away from your music?

Hopefully a connection to the feelings we’ve tried to create with these songs, cos we’re real proud of them!