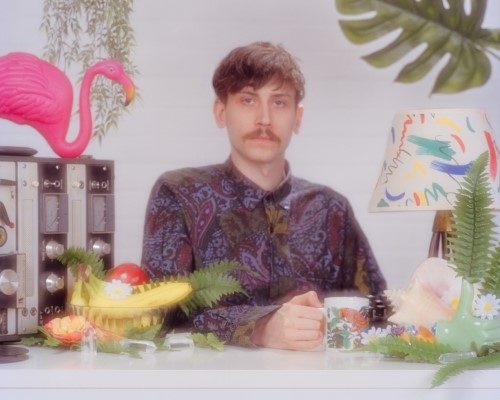 Toronto, ON-based psych-pop artist ZONES will be releasing a new album, The State of Light on October 5 via Hand Drawn Dracula. The album can be pre-ordered HERE. ZONES also recently released a video for “The Syzygy”, which was directed by Vinyl Willliams. Check it out below and find out more about ZONES in our Five Questions With segment.

Hi readers! My name is Derek McKeon; I live in Toronto, ON. I’ve been living here for ten years now. ZONES is my full-time artistic umbrella that I create music, visual and video art under. Recording tunes and making art is what I love to do, so I do it all the time.

I write and record all of my stuff in my home studio; it’s the way I’ve always worked. On a technical level, this record came together a lot differently than the last one. I wanted to zoom in and focus my sound and ended up approaching the recording process with a fine-toothed comb. There are years of work put into this LP and all of the time, experiences and feelings thrown into the mix make it feel a lot different than the other records.

I’m still working with tons of hardware samplers, synths, drum machines etc. but I’ve honed in on a process that allows me to work faster and at a higher quality. This is definitely the most detailed record I’ve made. ZONES for me is an outlet and way to get what is inside of my head out into something concrete. So, my music is just an extension of what’s in my mind and the writing style reflects that.

Yeah, we have a few upcoming dates. The live shows are a lot different than the records; it’s a chance to see the newest and most updated version of the project. We generally play newer unreleased tracks, improvise in between songs, and play new versions of old songs. Playing old songs can be fun because it’s kind of like covering yourself, same song but in a new sonic environment. It’s a glimpse into the ZONES world and a chance to hear things that won’t be out for a while, or you may never get released. Also, with the addition of the live drums makes everything a bit more groovy and dance floor friendly.

Hm, ya that’s a tough one. Even though there are more obvious “singles” off the album, I’d probably say “The Syzygy” sums up the vibe of the new ZONES sound. The rest of the record subtly hints at a funky disco vibe where this track just goes for it. It’s the last track off the album and a long journey of an ending, full of key changes, drum breaks, and goofy synth solos.

I’m really digging this new experimental rock band called Neil Young. There is also an obscure, relatively unknown act called Sum41 that are pretty cool. In all seriousness, there is a ton of groovy stuff going on in Canada, certainly too much to name. But, if I had to give a shout out to a few I’d say go check out: The Cosmic Range, New Chance, White Poppy, YlangYlang, Petra Glynt, Mr. Joy, Doomsquad, Moon King, and Doldrums.

Share this:
Related ItemsHand Drawn DraculaHive Mind PRInterviewontarioOntario MusicpopPsych-PopThe State of LightThe SyzygyToronto ONZONES
← Previous Story Five Questions With Brae
Next Story → On The Line with We Are The City