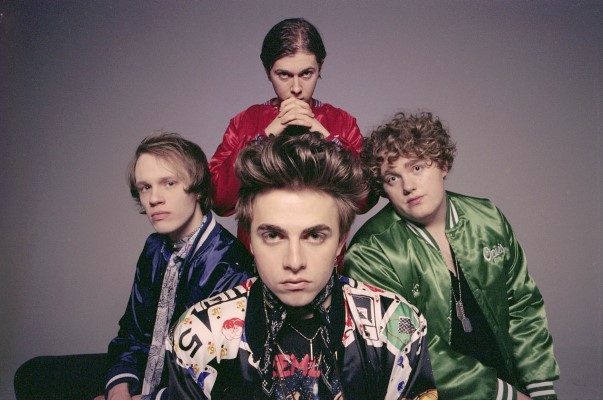 The Winnipeg-based pop group, Panicland, have released their highly anticipated new single, “Wasted”. A follow-up to the group’s successful debut single, “Bad Word”, which reached #26 on the Billboard Top 40 Canadian Singles Chart and the Top 20 on CHR, “Wasted” brings a nostalgic and eclectic spin to their already intoxicating sound.

First off, thank you for taking the time to chat with us today. How are you feeling now that the release of “Wasted” is within sight?

Thank you! We have had “Wasted” finished for a long, long time but didn’t decide to release it until now because we wanted to be able to follow it up with songs that are equally as strong and come from the same place. “Wasted” set the bar for every song that came after and now that those songs are finished too so we’re coming full circle by releasing the song that inspired the rest of the album.

How does “Wasted” differ from “Bad Word”, if at all? Does it signal a change in style for Panicland?

I actually think we’re a new band with the same name – mostly because “Wasted” wasn’t written for Panicland and was never even supposed to be released, which I’ll explain more below. After writing with so many different people, and having to adjust to so many strong opinions, I was pretty over having to guess which audiences would figure it out and have to explain why. By the time you explain why it’s the right time to release a certain kind of song, it’s already too late. So, while continuing to record the music that was supposed to follow “Bad Word,” I started writing and recording songs for myself that I would enjoy, not caring at all about what other people would approve or not approve. Ironically, this perspective is what’s responsible for our new single!

Tell us more about the writing process for “Wasted”, and what the co-writing experience was like.

“Wasted” actually wasn’t co-written by anyone – I wrote and produced the song. Like I was saying in the last question, I didn’t actually mean for anyone to hear it except for an ex-girlfriend, whom I wrote it for. I’m good with strategy, working hard, recording etc. but terrible at emotions and relationships. So after we broke up I was originally going to send her a mixed tape of songs by other artists to say what I wanted to say but none of the songs were saying it right, so I wrote “Wasted.” I recorded it that night, as fast I possibly could (which is why the production is so raw), so that I could send it off before it was the time I knew she went to bed. That was the only purpose that song had – I wasn’t thinking of the band, radio etc. at all. A few months later when the band and some of the team heard it we decided it was the kind of song people might need and that it would be the single. The original version I recorded that night, vocals and all, is the version that we’re about to release.

What should fans—both new and old—be most excited about with “Wasted”?

They can be excited about the fact that there’s a lot more where “Wasted” came from. Every song that’ll be coming after this one was written from the same place.

Do you have any shows lined up before or after the release?

We have a few promotional shows lined up. We want to make sure that if we’re doing shows they’re done in a way that goes the extra mile for the fans. For example, instead of just throwing a “release party”, which is usually just a way to promote the single, show industry contacts the release is supposed to be a big deal, and make extra money – I’d rather invite fans to an exclusive listening party at the studio before the single is even out and present the song to them in a memorable way, even if we lose money.

For those who aren’t familiar with you, seeing that you’re signed to the management team behind the Barenaked Ladies. What’s the story behind being signed?

We worked with another manager first, Glen Willows, from when we were 14 to 21. He helped develop us and taught us a lot about the music industry at a really young age. Once “Bad Word” was out and there was less to develop and more to manage we felt like the appropriate time to expand the team.

What are Panicland’s plans for 2018/19? Are plans to go in to record already set, or is the main focus expected to be on writing or live shows?

We’re actually recording the album that will come out after this album right now. The plan for 2018 is to release as much music as possible, in creative ways. There is the old industry model for releasing music (starting an album cycle with a single, going to radio, touring the single, waiting for certain holidays to end like Christmas etc., releasing a 2nd single, releasing the full album etc.) and then there is the new model. People consume music in 2018 differently than they did in 2015. Music is more of a gateway to culture now and it’s important to us that we “hack” into culture with our music. For example, how hip would it be to release a Queen-style song just as the new “Bohemian Rhapsody” movie is coming out? Then have a popular Soundcloud rapper rap the 2nd verse, allowing the song to tap into hip-hop culture (the #1 music-culture in 2018), also allowing the song to show up on the rapper’s Spotify page, driving their fans to hear us. One could say “won’t rock fans hate hearing mumble-rap on a rock song and vice versa?” I would say most kids in 2018 that have Lil Pump on their phones will also have Aerosmith, Green Day and Britney Spears – you can see stats online that will reflect this. Spotify has created a post-genre industry where the lines between genres are blurred/non-existent – how do you think “Meant to Be” by Florida Georgia Line and Bebe Rexha were possible? It’s the perfect time in music to release songs that are mini-events/spectacles and we want to take advantage of this!

Finally, any last words for your listeners and anything you’d like them to know about?

Firstly, if you read that full answer above, I am impressed. Secondly, I truly can’t wait for you to hear the new songs and I’m not just saying that because it’s the right thing to end an interview with. Thank you for sticking with us for so long!