Indie Spotlight – Past the Perimeter 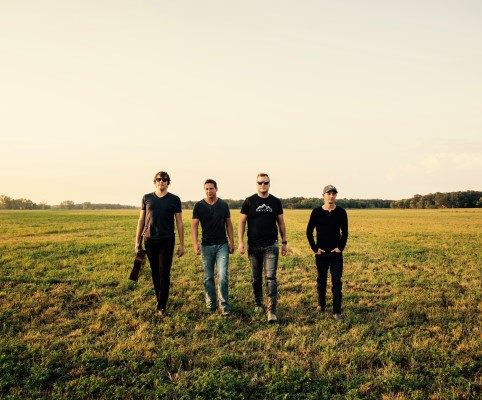 Welcome to this month’s Indie Spotlight featuring Manitoba artists, Past the Perimeter, who have always called Stonewall, Manitoba, home. Stonewall is a small town outside of Winnipeg, a few miles ‘past the perimeter.’ This high-octane country with a rock influence band includes Derek Peters (lead vocals/guitar), Lachlan McLean (guitar/vocals), Evan Taplin (bass/vocals) and Devin Biy (drums). The band’s history goes back to their friendship in high school and that friendship is just as meaningful today as it was back then. In 2008, Peters and Taplin started the band, McLean joined in 2010 and Biy in 2011. As a full band, they started to perform for fun at deck parties, some local events and local bars. It was during this time that they decided to take this career more seriously so their weekly practice routine became steadier and their ability and talent started to progress because they loved to play.

The band explains that their biggest musical influences are “Jason Aldean, Eric Church and Blake Shelton to name a few. But the biggest would have to be all the Canadian artists right now working hard to make a name for themselves and show the country world what Canada has to offer. The hard work coming from the likes of Brett Kissel, Lindsay Ell, Dallas Smith and Meghan Patrick, who are blowing up the Canadian country music scene, are what gives artists like us the drive to aspire to that level.”

And their non-musical influences? They believe “our families would be the biggest influence outside of music. Their undying support and love for us and what we do keep us going every day and allow us to continue with our passion.”

Although these four artists have been entertaining fans on stage for about seven years with their high-energy sets and engaging sound, it was in 2013 when they released their self-titled EP and their single, “Life Out Here” that brought their music to the forefront. 2015 saw the release of the video for “Life Out Here.” Their second single, “Silverado” was released in 2016 and that year, Past the Perimeter took to bigger stages opening for Dallas Smith and the Trews.

In 2016 and 2017, their talent was recognized with both group and individual nominations for the Manitoba Country Music Association awards. They took home the hardware for prestigious MCMA Emerging Artist Award in 2017. In June of 2017, their second EP with seven tracks, Lost With You, produced by Murray Pulver, was released and they celebrated that release with a sold-out EP Release Party in Winnipeg. From that album, the singles “Shotgun Beauty Queen” (and video for “Shotgun Beauty Queen”) and “Jack & Diane Kinda Town” were released.

So far, 2018 has proven to be an even better year for Past the Perimeter. In February, their single “She’s Gone,” written by Derek Peters, Evan Taplin and Murray Pulver, was released and it was this song that put the band on the Canadian Country Top 100 Trax Chart for five weeks and has over 110,000 views on YouTube. They released their latest single “Hearts Against the Wall” on August 13 to Canadian country radio; they performed at the MCMA showcase during Canadian Country Music Week in Hamilton, Ontario; and they have garnered ten nominations for the MCMA awards that take place on November 10 at The MET in Winnipeg. This group of four is now working on their third EP, and it should be released in early 2019.

Past the Perimeter has shared the stage with many great artists including Dallas Smith, The Trews, The Road Hammers, Petric, Bobby Wills and the Hunter Brothers. By doing so, came maturity and the evolvement of their music.

“We have learnt so much since we started, especially from the great talent we’ve been fortunate enough to work with that has seen our songwriting ability grow. And just being together so much on stage in different situations has brought us together on a musical level where we just seem to know what each member is going to do. It’s created a well-oiled machine in live performances.”

Past the Perimeter also believes in giving back to the community. After the devastating Fort McMurray fire, they held a fundraiser and raised $13,000, matched by the provincial government to total $26,000 for the Fort

McMurray Fire Relief Fund. Other philanthropic endeavours include raising $1,400 for Palliative Care in Manitoba and raising $1,000 for the Stonewall Collegiate Institute (SCI) music program. These are a just a few that have been helped by the generosity of these four men.

If you want to get to know more about Past the Perimeter, check them out on their website; and to listen to their music, you can stream it on Spotify or download it on iTunes.

Their sound is impressive, their energy is infectious and when you listen to their music you can’t help but be drawn in by the effervescence approach to country music that is Past the Perimeter.

Related ItemscountryIndie SpotlightManitobaManitoba MusicPast the PerimeterReverbNation
← Previous Story Arkells release “Only For A Moment” ahead of Rally Cry
Next Story → Jacynthe celebrates the 20th anniversary of her first album, I Got What It Takes