Canadian Beats Passport – Show Review – The Struts in Toronto, ON

It was a long and convoluted path that led Luke Spiller to spend the night of his 30th birthday prancing and shaking across the stage of Toronto’s sold out Opera House. The Struts’ frontman co-founded the band with guitarist Adam Slack in 2009 and the years that followed were a period of growth and change for the group. There was lineup shuffling, their former drummer and bass player replaced by current members Gethin Davies and Jed Elliott respectively. They bounced between labels, going from the now defunct Future Records to Virgin EMI to Interscope, and they released their debut album, Everybody Wants, twice; various songs added, subtracted and re-recorded for the second go. Though that may give the impression that they are slow to get going, the opposite is actually true to an almost unbelievable extent. The UK band were selling out shows in America before they ever set foot there and were opening for The Rolling Stones before their album had been released even once. Both feats are equal parts example and result of the way The Struts operate: hit the ground and the stage running, go big or go home, and if you’re not ready to rock then be ready to “fuck off for the exits” as the singer said himself.

True to form, the band burst onto the stage with “Primadonna Like Me”, one of four singles released to date in anticipation of their sophomore album Young & Dangerous, due for release on Oct 26. The song quickly achieves the energy levels that have allowed The Struts to become so successful as a live band. Spiller is the last one to the stage and crosses it several times, arms raised, bidding his audience to rise up and welcome him before proclaiming in defiance of anyone who might doubt his right to the spotlight: “Hey, don’t you know who I think I am?”

Engaging the crowd from every angle from the moment he stepped on stage, Spiller lead the whole room easily into the red-hot, finger-snapping swagger of the single from which their current tour takes its name, “Body Talks”, followed by the eponymous single from their 2014 EP Kiss This. Pausing only to promise the crowd one of the best shows of their lives, they then played the unreleased song “Fire” which was more alternative radio rock than retro glam but held its own by offering an enticing glimpse of Spiller’s vocal range in its verses and a simply written but heartfelt chorus that proved easy to sing along with, even for the uninitiated.

They bounced back and forth between the old and the new with “Dirty Sexy Money”, “People” and the especially well-received “One Night Only” for which Spiller traded his glittering t-shirt for a shiny silver kimono style piece and his centre stage mic for a piano.

The one cover in their set was given the same treatment as the rest of their set, the signature riff of Bruce Springsteen’s “Dancing in the Dark” coming in supercharged but instantly recognizable over an explosion of drums, to a mixture of cheer and derision. Oh great, another for the innumerable pile of Springsteen covers, said the undertone of the groaning of the as yet unaware and preemptively annoyed. Hell yes, said yours truly, having only heard tell that the cover has been known to run as long as fourteen minutes. After a first run through the song, the band played on as Luke announced that he would need a Courtney Cox to dance with him, alluding to the song’s original video. He found his partner in a fellow birthday celebrant who did not share her age most likely because it seemed to be little more than five years old. In what the singer later called a first, he got to his knees to dance and sing with the little girl to the absolute delight of the crowd.

After the amateur rockstar returned to her place in the crowd and the band carried on with fan favourites “Mary Go Round” and “Put Your Money On Me”, punctuated with an impromptu chorus of “Happy Birthday” sparked by Spiller’s bandmates presenting him with a candle-lit cupcake and a bottle of champagne.

The newest single “Bulletproof Baby” was introduced on the tail of a harsh dismissal of those who think the band’s evolving sound is overproduced. The sentiment set a fitting precedent for the song, which represents their biggest departure from the band’s glam rock roots. With its starkly backed verses, harmony accented chorus, and defiant lyrics, the studio recording arrives at a sound that is comparable to Lorde’s 2013 smash hit “Royals” but has a decidedly rougher edge. In their live performance, it had a fuller and heavier sound, courtesy of Slack’s guitar providing the backing rhythm for the verses instead of just bookending them. Spiller’s voice meanwhile was alternately torn from his throat and drawn up gracefully from whatever part of his slight frame has miraculously found space for it and the larger than life stage presence with which it is part and parcel. The song carried on through another lengthy instrumental during which Spiller made the unlikely but well-executed addition of a harmonica.

In a final grand display of his power as a frontman and commanding force, Spiller lead the crowd in several minutes of call and response, egging on the whole room by playing either half against the other, ultimately drawing a wealth of sound from everyone. Somewhere behind the singer’s display, the persistent beat adapted to that of their final track, “Where Did She Go”, as Spiller continued his crowd work, instructing his audience to crouch to the floor of the cramped, sweaty venue. It would be a difficult ask from the best of frontmen, but a wide majority of the crowd gave as good as they had been given and crouched on the floor, waiting for the music to swell so they could rise up in a bouncing, hand-flailing display that the singer called “human fireworks.”

For their encore Spiller returned to his piano for two new songs, dialing down the energy with the slow and lamenting build up of “Somebody New” followed by the deceptively understated intro that eventually erupts in the full force of “Ashes.” The final song of the night was their 2015 viral hit “Could Have Been Me”, a rallying cry for all those who believe in the pursuit of their dreams with the same fierceness as the band themselves always have, its lyrics spelling out a philosophy that seeks to engage life as fully as the band engage their fans.

Having reached the end of their set, the energetic frontman bid farewell to the audience who spent the night in the palm of his hand, rocking to a combination of many instant-classics from the band’s back catalogue as well as intriguing and at times markedly adventurous new material. His final words to the crowd were framed as an instruction but following a night of real body moving, throat-rending rock, will no doubt prove to be more of a prophecy: “Ladies and gentlemen,” he said. “Never forget the name The Struts.” 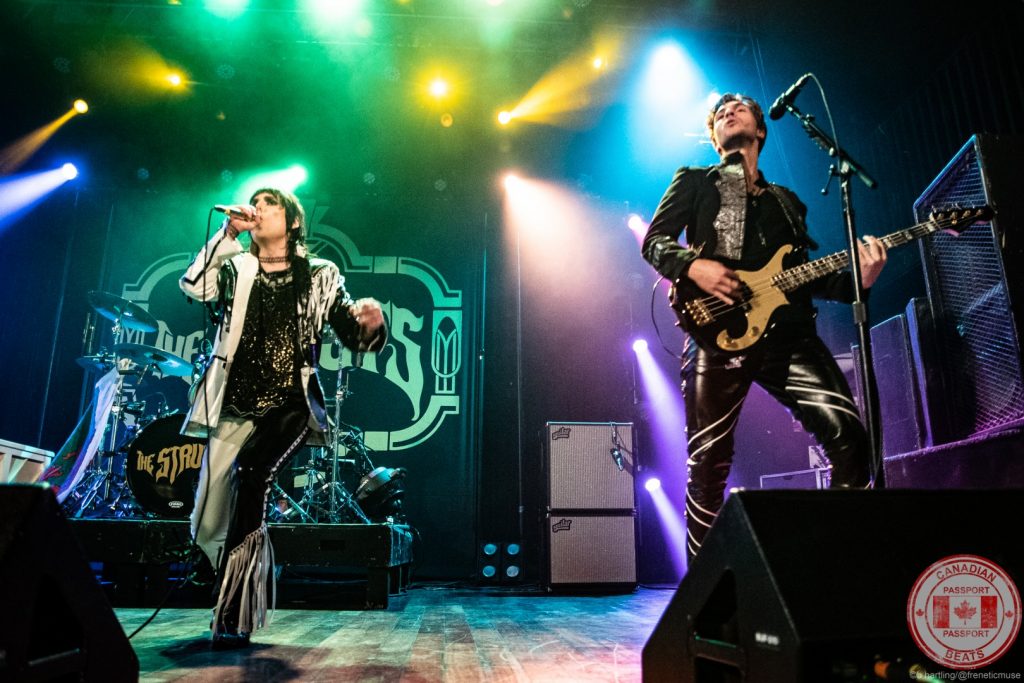 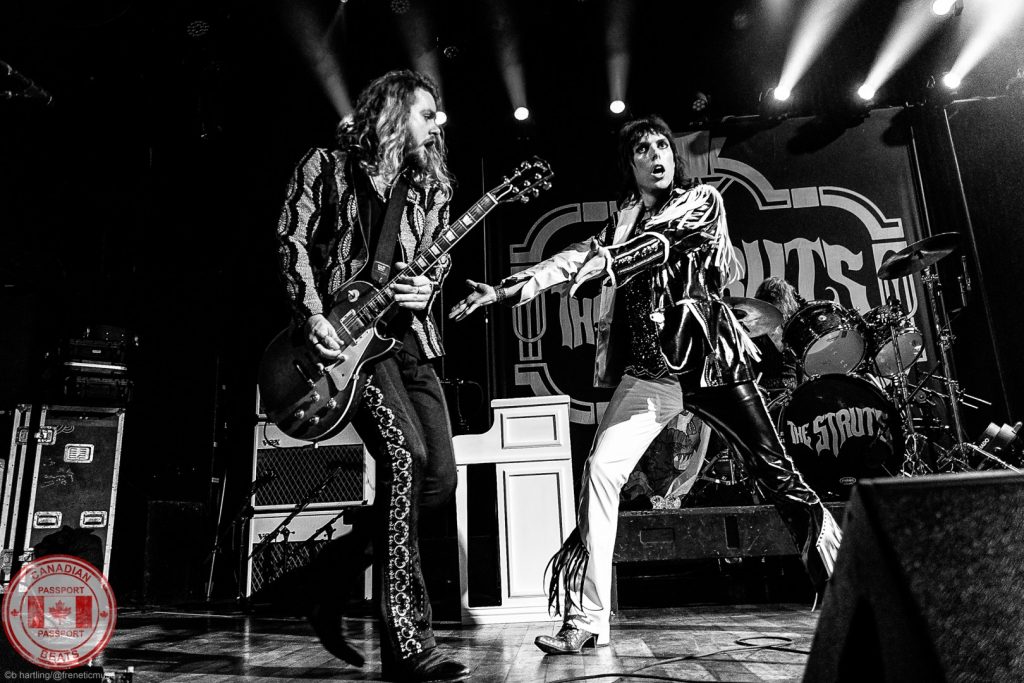 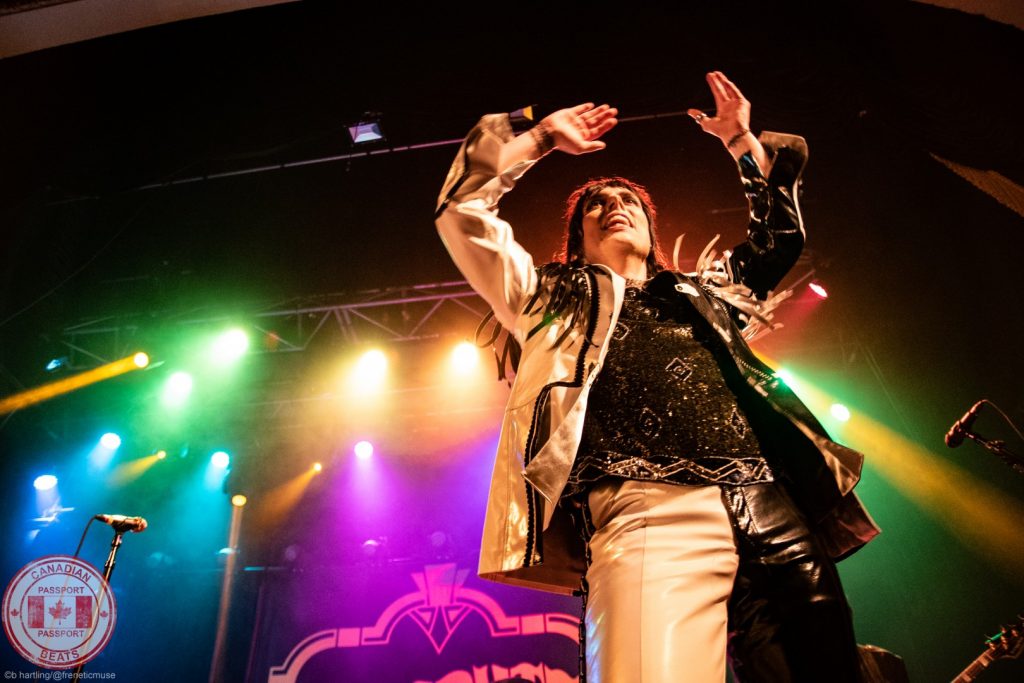 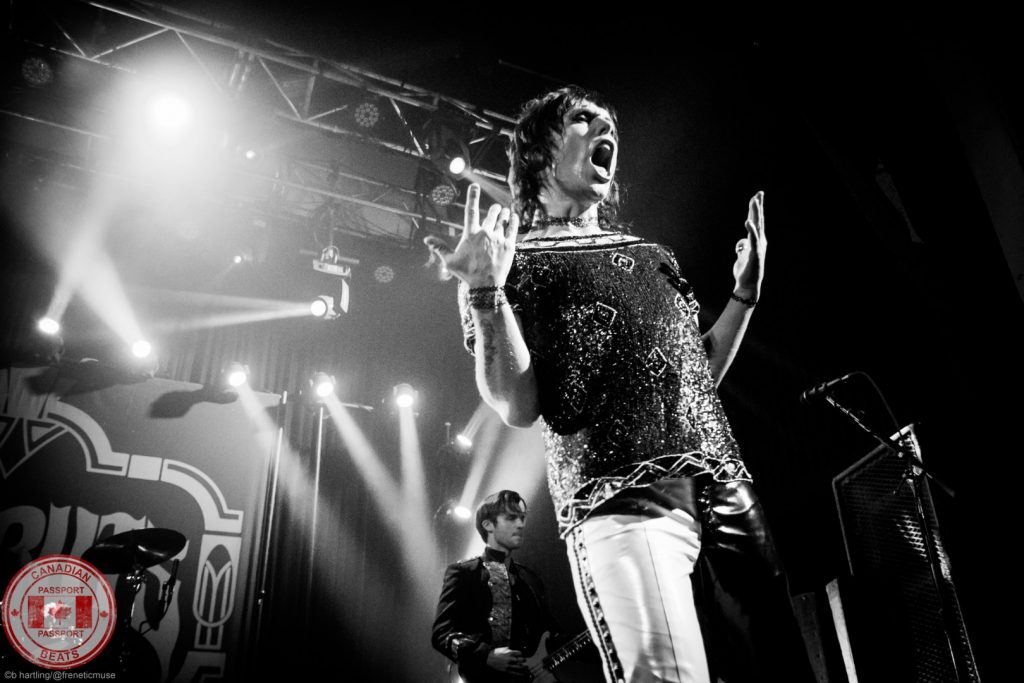 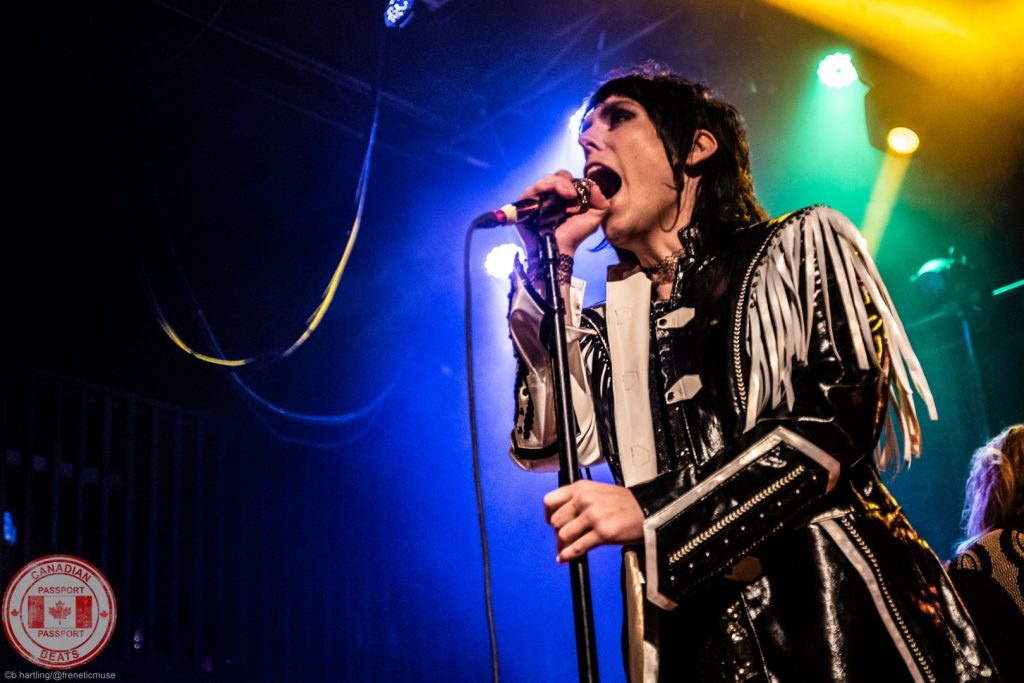 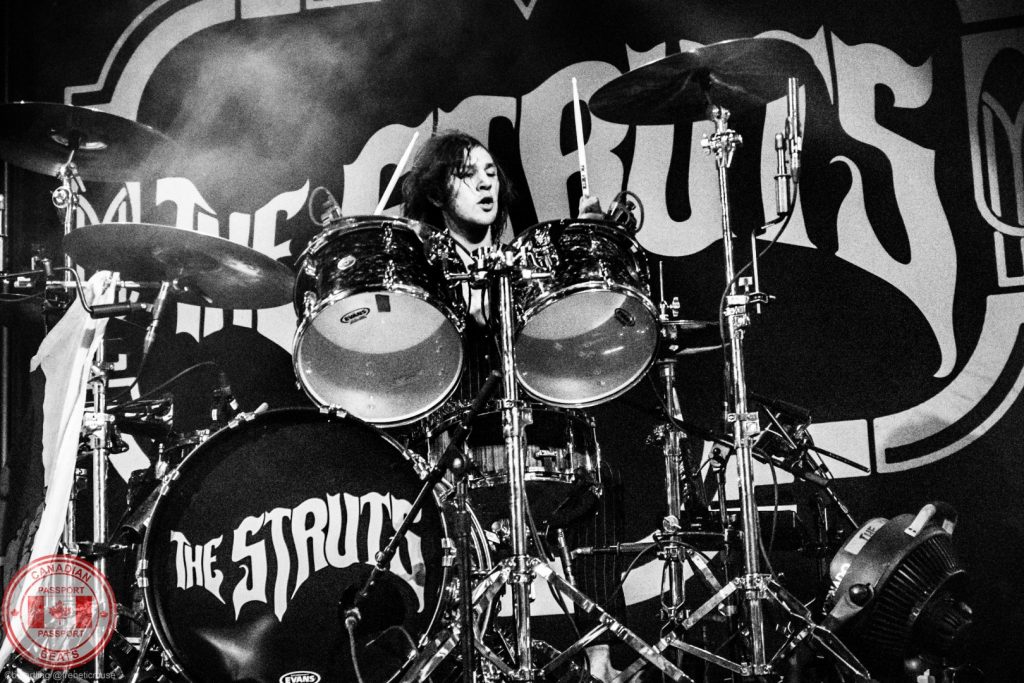 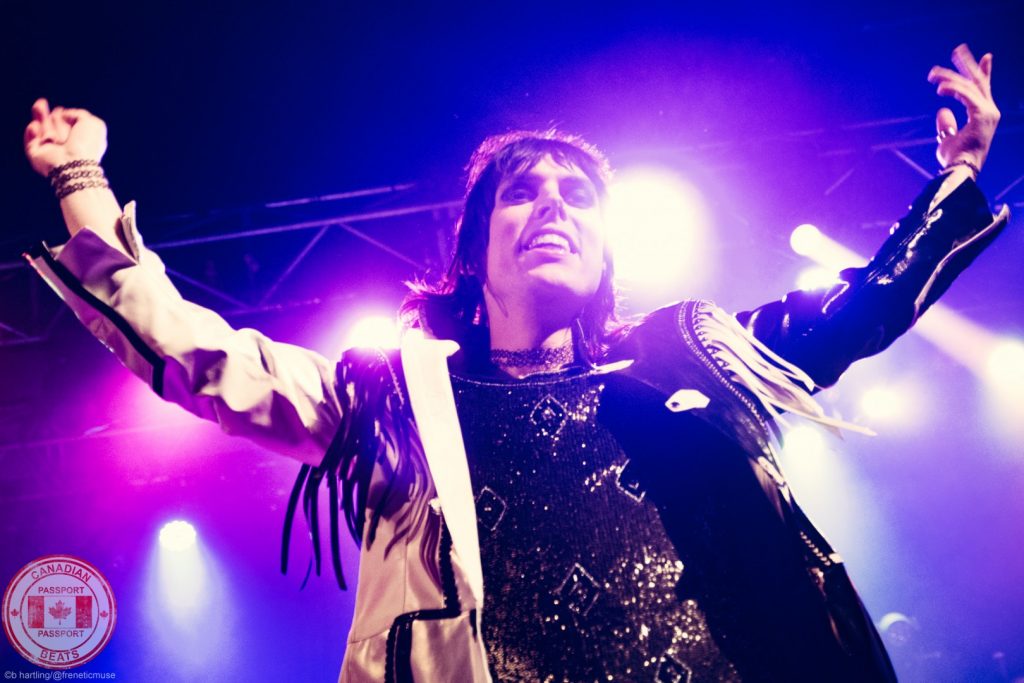