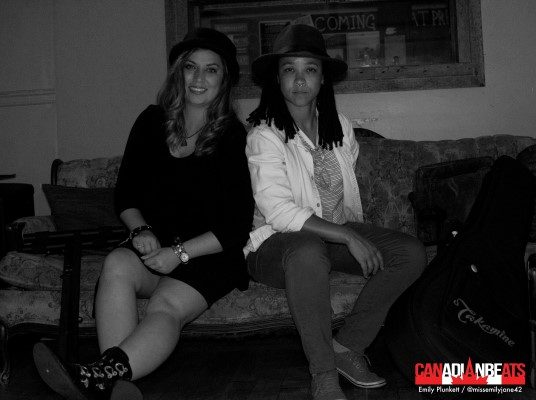 For the first time ever, Laura Gagnon and Kimberly Sunstrum are venturing from the Nation’s Capital and going on tour.

Pianist and writer of Disneyesque theatrical Pop, Laura Gagnon, was “following love” when she relocated to Ottawa from London, ON, five months ago.  In the interim, she has become an easy fit for the city’s growing and established music scene.

“When I came out here, and I adventured into the all these different venues.  Every single venue there was an amazing musician,” says Gagnon.  “I’ve been in London for 17 years. It wasn’t that big of a transition, but it’s been a good time so far.  I’ve got a job now, life is rock and rolling.  I’ve had some amazing support system, like Kimberly.”

Sunstrum, The ever-busy singer of sweet Afro-pop acoustic tunes, was one of the first to welcome Gagnon to Ottawa, and the pair have quickly become one of the city’s staples; playing gigs from the Great Theatre Company to their There and Back tour launch at Ottawa’s Pressed Cafe.

Sunstrum says she met Gagnon during a show with Gagnon’s boyfriend.  “She’s got killer vocals,” Sunstrum says, “rhymes for days, and owns the style she’s interested in…[she] drank the purple Kool-Aid when it comes to Disney and is totally into it!”

For whose idea it was to actually go out on tour, Sunstrum says “It’s actually Laura’s concoction. I’m just along for the ride!”  Gagnon’s created included unique opportunities to play in a school gymnasium in Kingston.

Gagnon says the inspiration for the school show came from a family member who works at the school. “I asked her, would [the school] be interested in a couple of musicians come in to talk and perform.  And she said that would be fantastic to inspire the young generation.”

As the tour continues on through this week, expect Gagnon and Sunstrum to play Gagnon’s Doll House Showcase in Toronto, and alongside drag queens at their show in London.

Check out Laura Gagnon and Kimberly Sunstrum on Facebook and in the following cities this week: