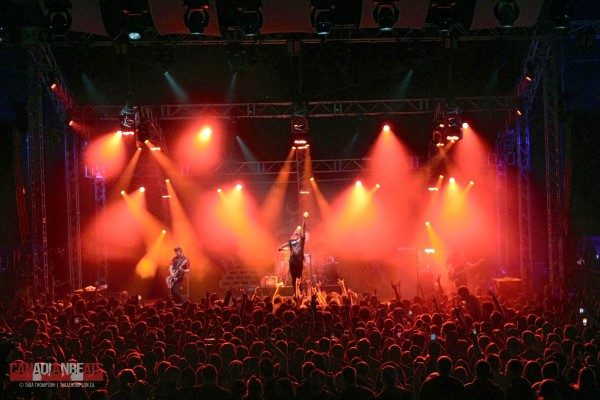 The Iceberg Alley Performance Tent concert series have had nothing but great reviews so far. Night six was one of the nights that I had been looking forward to since the lineup was released earlier this summer.

The first band of the night was St. John’s own Waterfront Fire, fresh off their European tour. Waterfront Fire is Andre Boyd (guitar), Paul Brace (bass), Jordan Coaker (vocals), Ben Thistle (guitar) and Dan George (drums). They began the night with ‘For What It’s Worth’, a track to capture the attention of the audience through both music and stage presence. One of the first things I noticed was a change in stage presence from the beginning days of Waterfront Fire to now. There seems to be a laid-back vibe as they embrace the audience and showcase their interesting dance moves.

The songs performed ranged from both studio albums, with ‘First Light’ and ‘Glass House’ from there 2015 release, First Light. During ‘Chemicals’, another track released from this album, Coaker seemed to take inspiration from the song through his intricate movements on stage.

Their second full-length album, Stillwater Lake, was released earlier this year. The band made sure to play a variety of tracks from this album to showcase their talents from their current single “What Went Wrong” to “Ghost Town”. “Head Full of Fumes” seemed to be a slower track then others they played during the night. From the opening note, Coaker’s vocals were filled with emotion as he portrayed the feeling of the melody. Audience participation seems to be the key to a memorable performance and will keep the audience wanting more. Audience participation during “Paper Wings” and “Believe” allowed these tracks to stand out and were a crowd favourite from their set.

Waterfront Fire ended their set with “Sleepless Nights”, a powerful tune with a memorable ending. This created a nice segue into the next set. 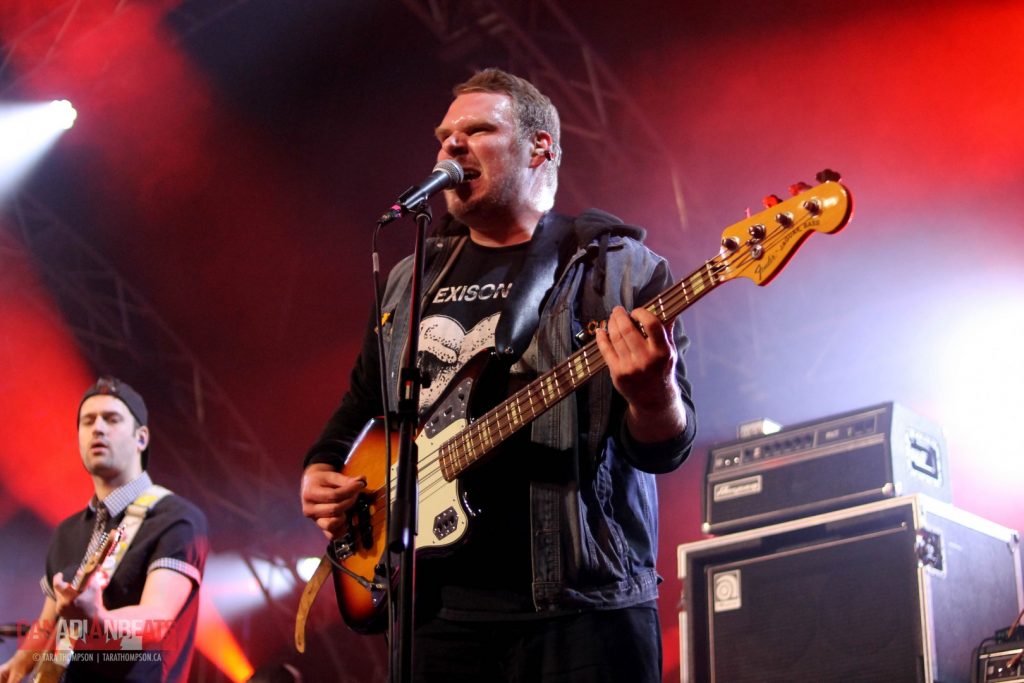 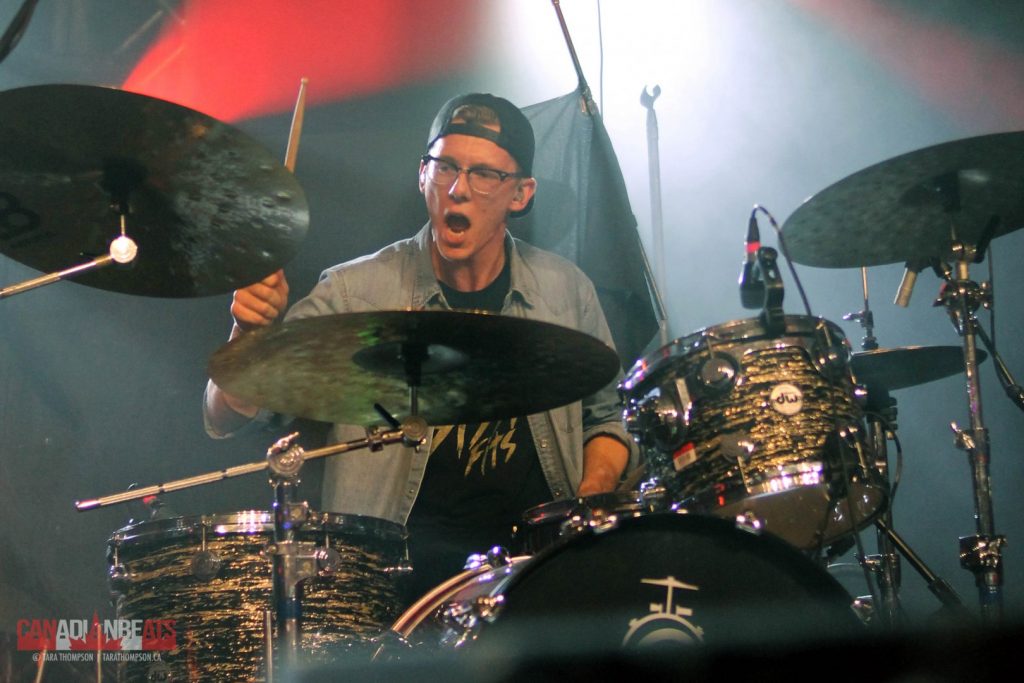 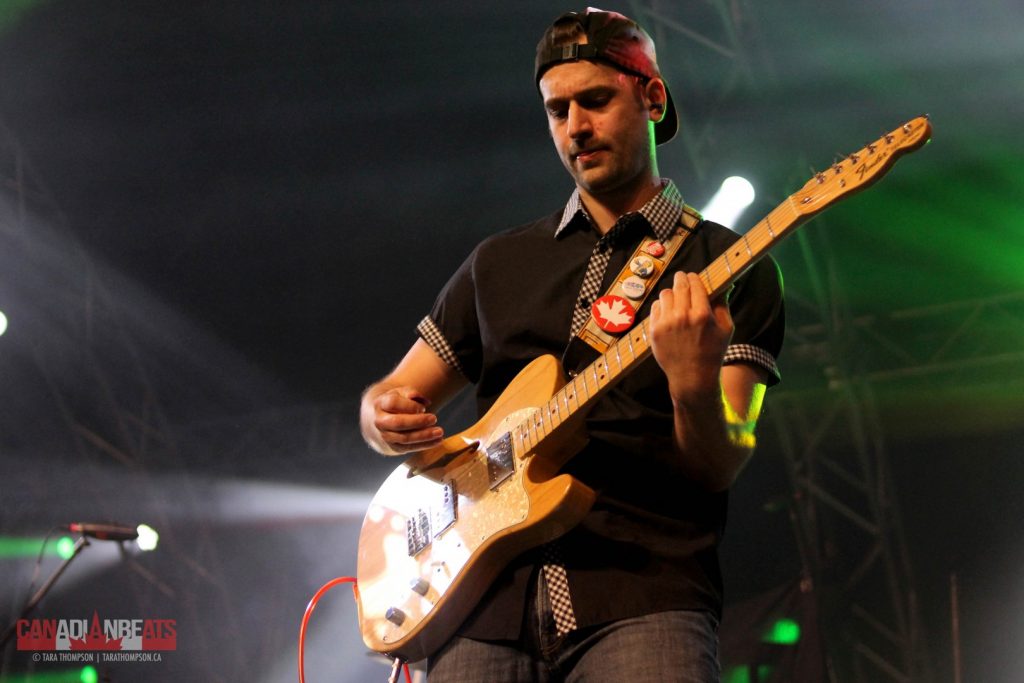 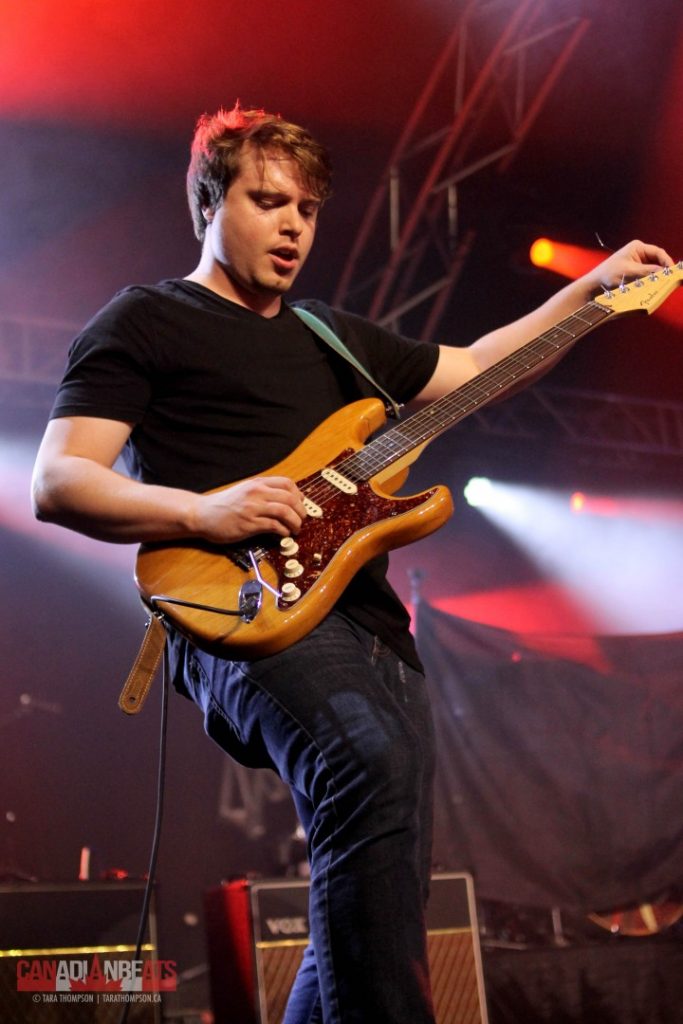 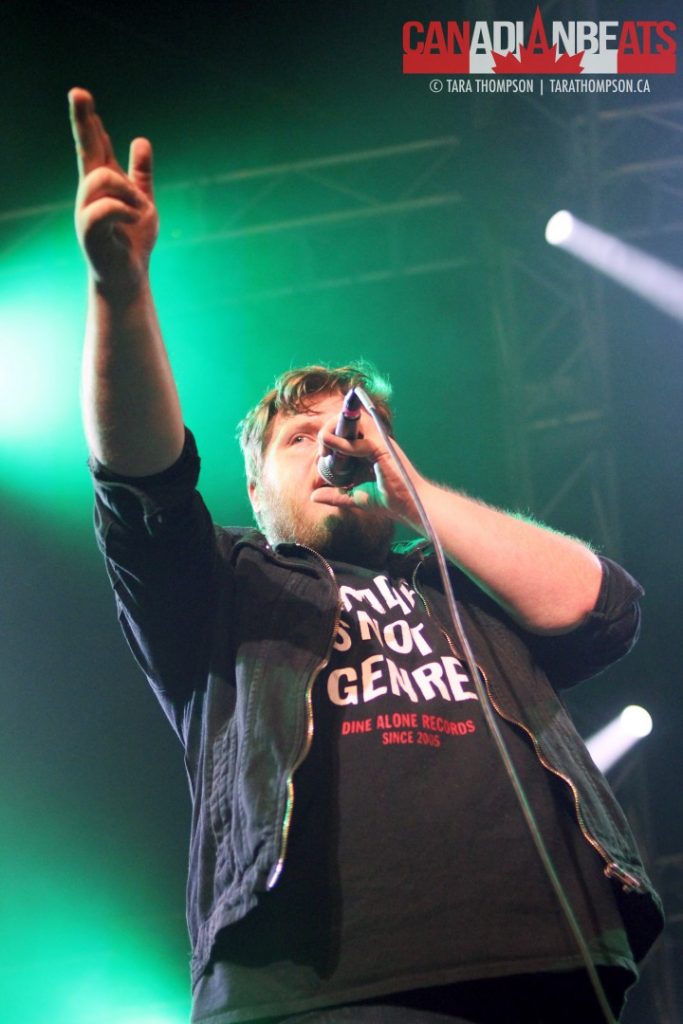 The second act of the night was The Motorleague and I’ll be honest, this was one of the bands I was looking forward to the most (and they certainly did not disappoint).

The Motorleague, hailing from New Brunswick, is a rock band comprised of Nathan Jones (guitar), Shawn Chiasson (bass), Francis Landry (Drums), and Don Levandier (vocals/guitar). They have played here in Newfoundland numerous times and have seemed to acquire quite a following, as the tent was packed and the patrons seemed to be hanging on to every note. The Motorleague can be described as a solid rock band with a great stage presence. They did not leave much time between songs which definitely kept the audience on their toes.

The set opened with “North America” (from their album Acknowledge, Acknowledge released in 2013) which was a great rock tune to kick off the night. Following this “You Won’t Believe What Happens Next”, one of many of my favourite during the night, captured and held the attention of the audience as many began to sing and bop along to the track.

“Litany For The Completely Forgettable” started with an emphasis on drums, as we learned that the first time the band played this track live was at Distortion (a local bar). This is a pretty neat little tidbit of information that shows this is not the band’s first time on the rock.

Levandier kept telling little tidbits about each track. The song “Every Man Needs A Cape Breton” was said to be about telling your friend that you love them because no one knows what tomorrow brings and that each and every one of us should live the night as if it is our last. This is very inspirational words of wisdom that we should all follow. Another interesting fact about this performance is that they all sing on this track, including some great harmonies, and had a little sing along with the audience.

“The Boards” was another great rock tune (and another one of my favourites from the night). The extended guitar and drum finish just added to the intensity of the track, adding almost otherworldly sound as they started into the next track; ‘Alone In The World’. This track is one of their newer ones released a few months back. This is sure to be another hit. Overall the setlist seemed to be an even compilation from their albums, including “Facetime With The Boss” from 2009’s Black Noise and “A Little Too Obvious” from 2015’s Holding Patterns.

The Motorleague ended their amazing set with “All The Words”, a song that definitely got the audience moving. Part way through the song the singing stopped and Levandier said that we were going to have a little sing-along since we were all friends. With that, the audience united and helped finished off the track. It was such a great way to end their set and solidify an additional following to their fanbase. 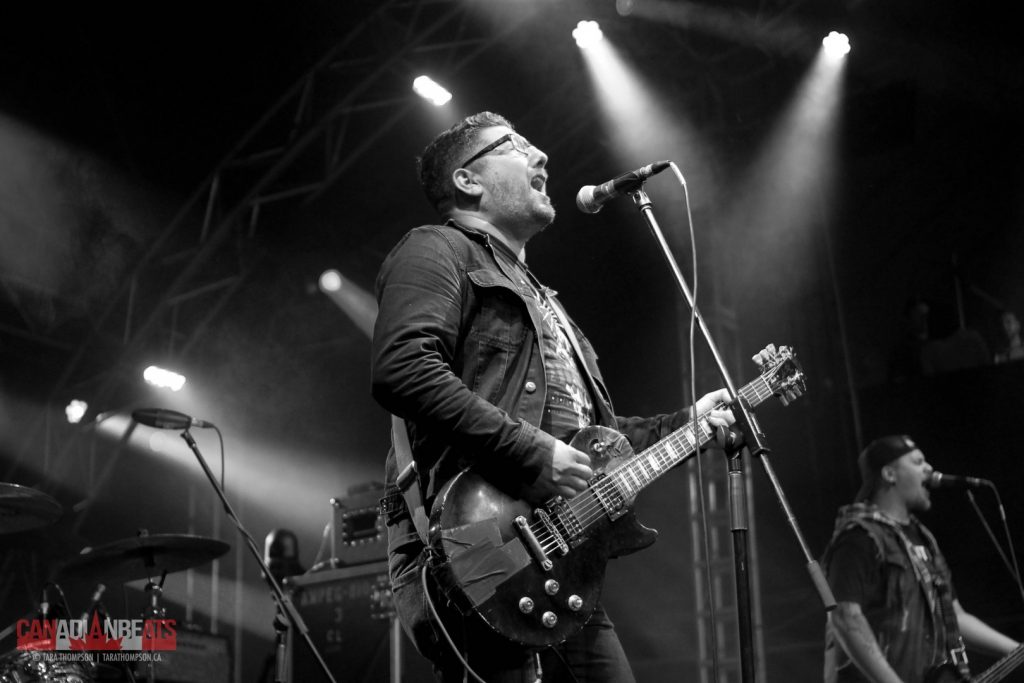 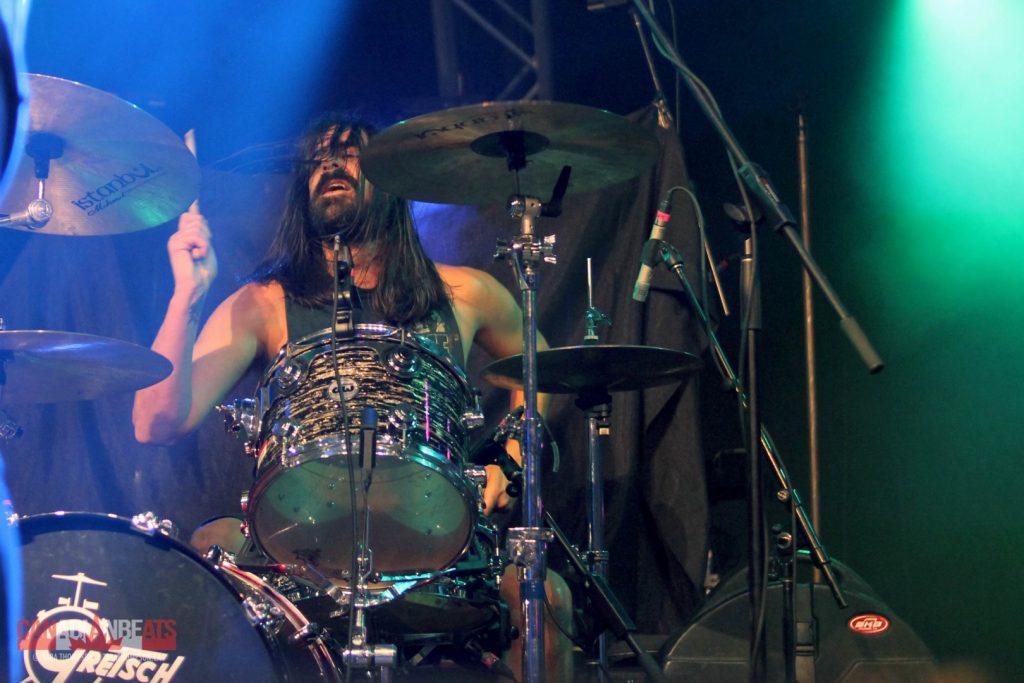 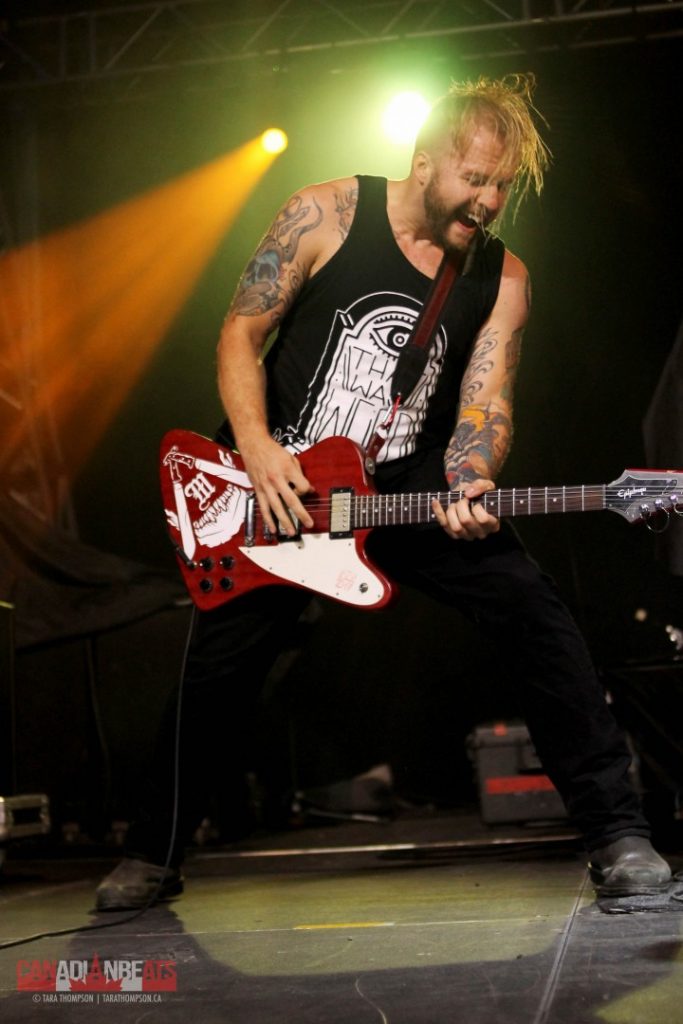 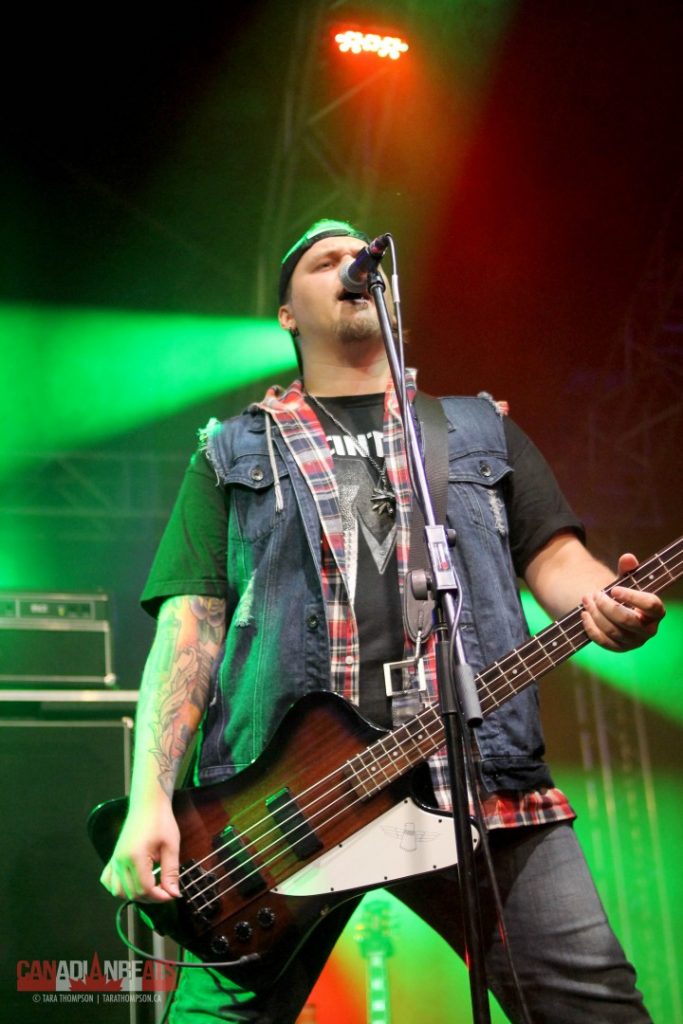 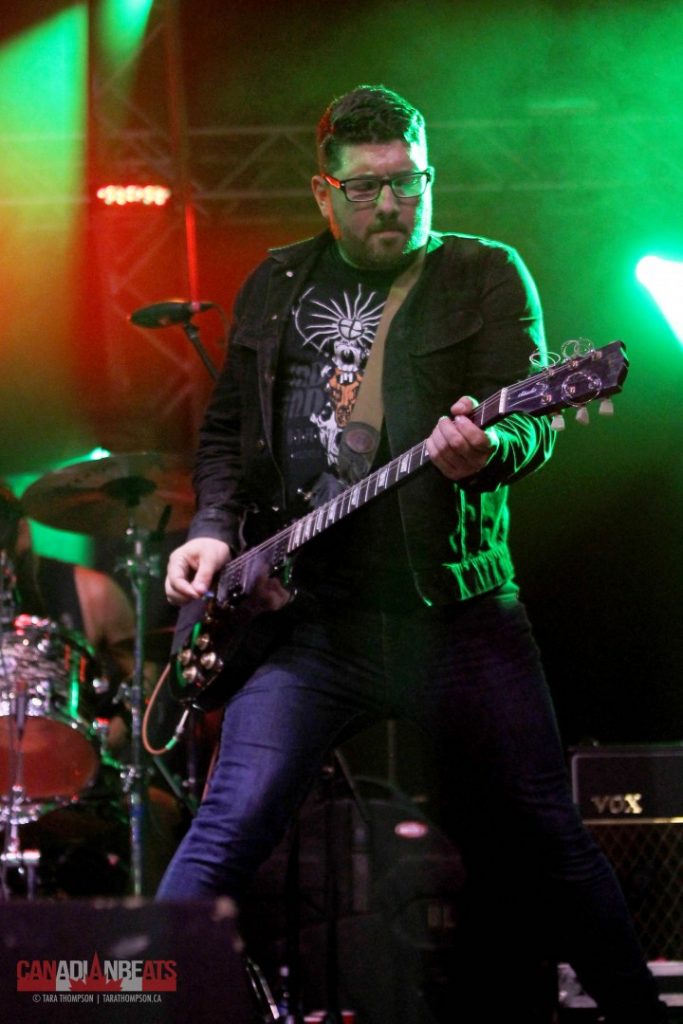 The last band for the night was Billy Talent. I’ll be honest and say that I did not expect them to have such a following but they played for a sold out show and it showed. The audience was wild with anticipation, cheering for even the smallest inkling that the show was about to be.

Billy Talent is a Canadian rock band hailing from Mississauga, Ontario. The group, composed of Benjamin Kowalewicz (lead vocals), Ian D’Sa (guitar), and Jon Gallant (bass), have been playing together since 1993. Jordan Hasting (Alexisonfire) is currently filling the role as drummer. The band has sold over one million albums in Canada alone, with nearly three million albums sold internationally. The audience during their performance just aided in solidifying how great they are.

“Devil In A Midnight Mass” was the first song of their set and it started on a high note as the patrons were jumping around, pumping their fists in the air and singing along on the top of their lungs. Their set list for the night included many fan favourites from their earlier days such as “Try Honesty” (which is the song I think of whenever I hear Billy Talent mentioned) and “The Ex”. These songs seemed to be fan favourites, as the audience cheered and sang along from the very first note.

“Afraid of Heights” was another stand out of the night. This song started off with only drums with the adding of guitars to cause a layering effect. This allowed the guys to show off their many talents and the creativity they put into all their songs.

The band performed a track called “Ghost Ship of Cannibal Rats”, which is one that many in the tent probably did not see performed before since it was only released in 2017. This was definitely a treat for all those in attendance. There was also this crazy light show built into the performance that followed the beats of the track. Such a great way to capture attention (if they needed to).

One of the most memorable moments of the night was when Kowalewicz announced to the audience that there would be a special guest performer that would join them on stage. This was none other than Aaron Solowoniuk. On January 15, 201,6 Solowoniuk announced that he would be taking a hiatus from the band due to an MS relapse. However, he has continued to make special guest appearances with the band and playing the drums on ‘Rusted From The Rain’ and ‘Pins And Needles’. The audience gave him a warm welcome and cheered along as he hit the beats.

“Devil On My Shoulder” was another crowd pleaser. As with other tracks, the audience sang along to every word. Towards the end of the track, Kowalewicz introduced his band members, which singled that they were about to leave the stage. But that did not mean they were done for the night. The tent erupted in cheers and wishes for an encore. Granting their wishes, Billy Talent came back and performed three more tracks; “Viking Death March”, “Fallen’ Leaves” and “Red Flag”.

Who knew that Billy Talent has such a large fan base here. After apologies for not playing here in a number of years and promises that it won’t be so long next time, fans definitely have a memorable night to add to their repertoire. And I’m sure I’ll be humming the tune to “Fallen’ Leaves” a few times in the coming weeks. 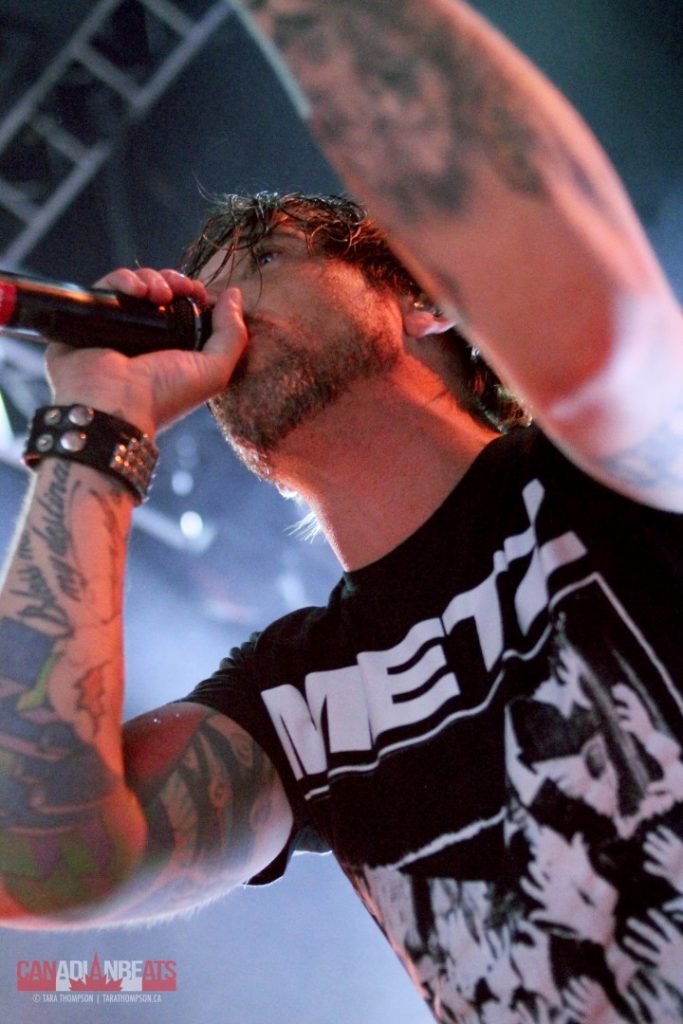 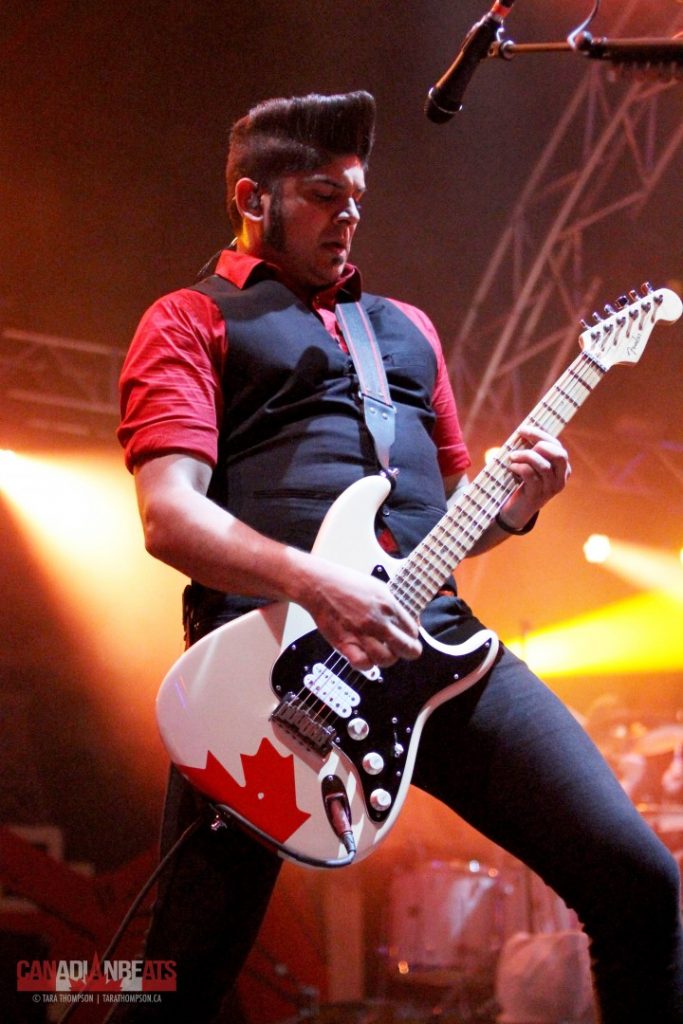 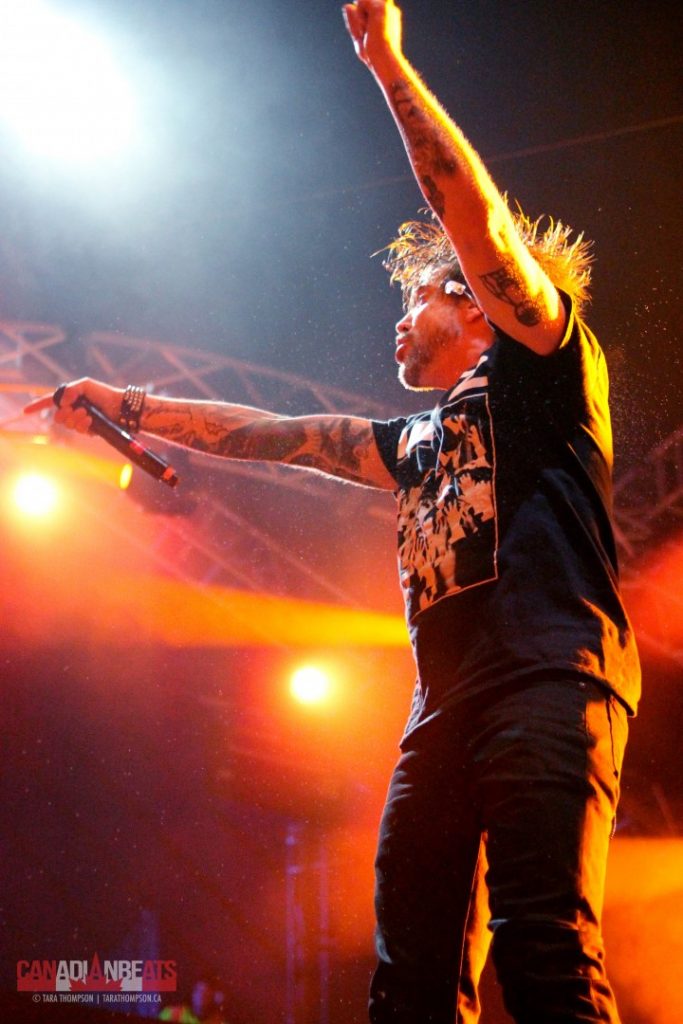 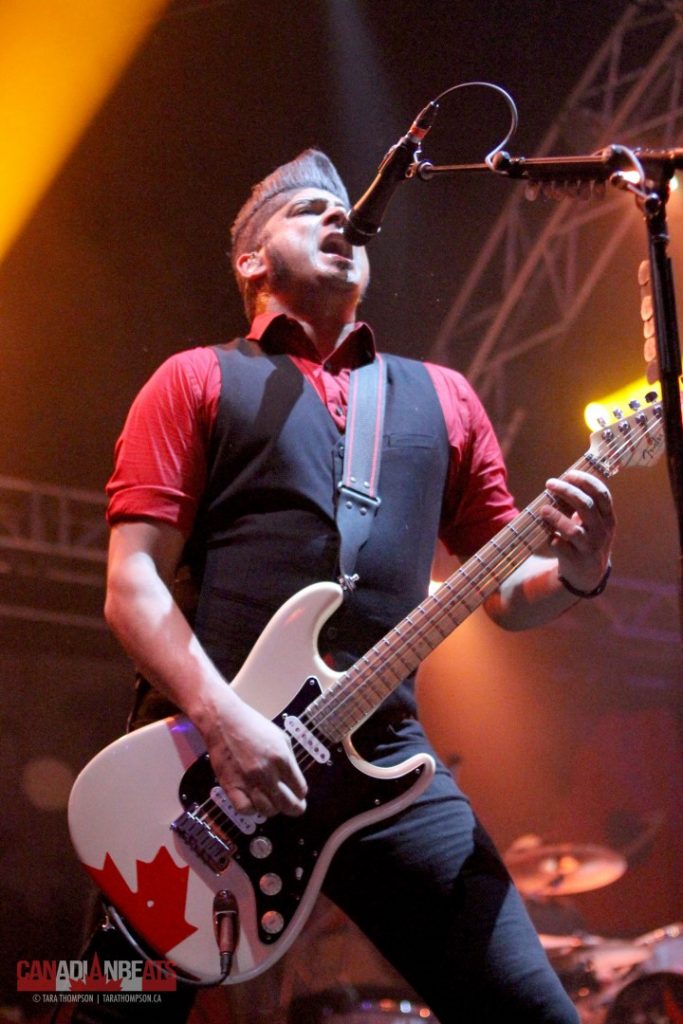 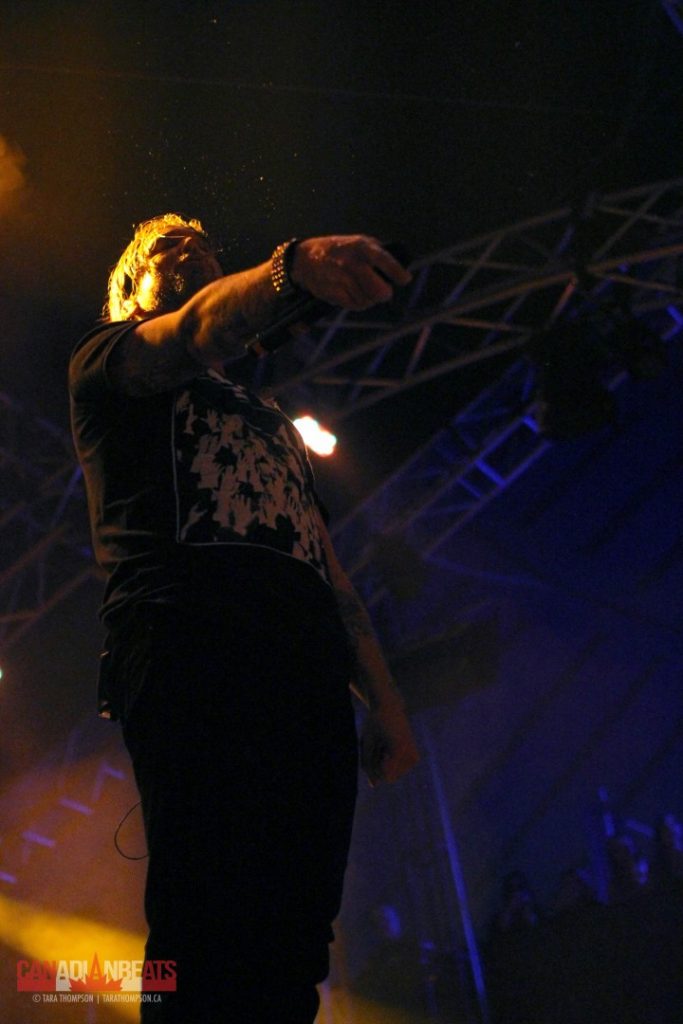 For more photos from Night 3 of Iceberg Alley, head to our Facebook page!

Interested in learning more about these bands/singers, check out their website in the link below:
Waterfront Fire
The Motorleague
Billy Talent