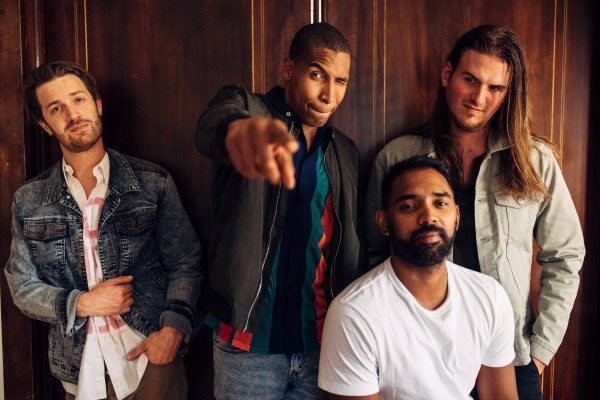 Their new single “16 Candles” is a powerful tribute to the late Laquan McDonald – the unarmed black youth who was shot 16 times by a white police officer – and an overall message for healing and justice. The band was touring America at the time the footage of the 2014 shooting was released. Vocalist Myron Dean penned the song and guitarist Riley Hastings, bassist Johannes Lodewyks, and drummer Sandy Fernandez helped bring it to life.

We spoke with the band via email about their newest release. Here’s what they had to say:

This is an incredibly honest and powerful song. Why was it important for you guys to create this dialogue through your music?

As Canadians, it’s easy to distance ourselves from what’s going on with America’s political and judicial system – like we’re trapped behind a screen.  It wasn’t until we were thrown into a situation like we were in Manhattan a few years back that we felt this whole social climate first hand.  Canada is (mostly) such a positive place to live.  It’s important to break out of that box and join in on the issues that are going on down south.  Not only as activists but as artists as well.

I understand you joined the march in New York – what was the energy like in the streets at that time?

I would say it was electric, but that word often has such positive connotations.  It was an agitated type of electricity.  The energy was one that was fed up and pushed to their limits. The type of civil unrest that our parents and grandparents experienced.  It’s important to be a part of a movement like this but incredibly infuriating that we’re still dealing with the same problems of racism and class.  We played a gig that night in Alphabet City.  It was one for the books.

What was the initial reaction from fans after the lyric video was released?

From being a party band to a reggae/ska band to being a rock’n’soul band, our fans have grown up with us and were very ready to hear that we were, in turn, growing up with them.  The initial response from our local fanbase has been phenomenal.  However, we’re excited to see what the reach might be on more of a global scale.  We spent a solid 5-7 years touring so we’d like to hear from everyone from Vancouver to Berlin.

As a band, are you hoping to continue this kind of dialogue as you create more music?

We can hope that there isn’t as much of a need in the future to create this dialogue.  But let’s be honest – there’s always going to be a need to inform, teach and preach the message of healing and unity that we promote with “16 Candles”.  It does not stop with police brutality or even racism.  As an ethnically diverse band who’s working on their tenth year in the business, we hope to be a voice for growth, strength and love.  At the same time, once in a while, you just need to kick out the jams.  Ya know?