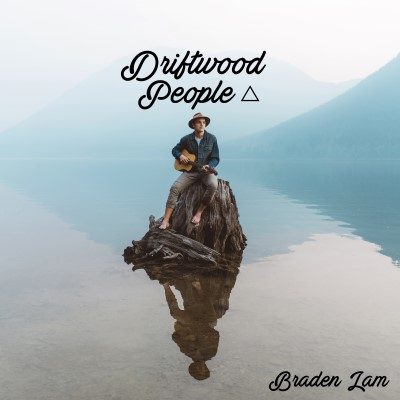 Hailing from Halifax, NS, Braden Lam is an unusual singer-songwriter. Many of his contemporaries wallow in the melancholy and plunge the depths of love and despair that is their crutch to write & perform, but refreshingly his compositions and delivery is truly uplifting. He cites Dallas Green and Hey Rosetta! As influences, but he is developing into a very accomplished artist in his own right.

This 6 track EP/Mini Album out now –is a beautiful ensemble piece. For inspiration, he cites his learnings during the long roads touring. “After moving across the country three times in one year, I had gained a false sense of connection with the world and myself,” confesses Braden. “It was like standing against the wall at a party and watching from the outside. I sought the isolation, but then regretted the loneliness and lack of community.” The album Title is inspired by the term Driftwood used by the Mi’kmaq to refer to early colonizers known for their disruptive interactions as they drifted through various communities.

The first track “Halifax Girl” is a short and stirring atmospheric East Coast love letter that leads straight into the title track “Driftwood People” has an instantly catchy riff leading into Lam’s understated vocals talking about the relationships that have passed him by. Reflective but never downbeat; almost a dawning perception that there is plenty of time to right the wrongs. Growing up encapsulated in 3 minutes 23 seconds!

“Dawson City” follows a similar vein; with Lam placing himself back into the gold rush era with the stark realization that the real ‘treasure’ was never the shiny chemical element but the experience of time and place. He reveals he wrote the track to capture the feelings from his Yukon Trip “Everything is so large and just vast untouched beauty. It was quite a humbling experience realizing how insignificant many material things in my life were compared to this bigger picture that was revealed there in the mountains”.

“Maya” is a rousing number with a touch of Paulo Nutini influence – a great track live. ‘On My Way Home’ and ‘Into the Light’ draw this mini-epic to a close.

Delivered in Braden’s refreshing and catchy folk-pop style, the songs are very personal to Lam and hang together seamlessly. That authenticity shines through.

Braden hits the road at the weekend promoting the new album with a full band tour across Atlantic Canada. His backing band, The Driftwood People, consists of Brett Chivari (drums), Nick Pothier (bass, vocals), and Jonathan MacKenzie (keys). The official Halifax release party is at The Carleton on October 4th. CB’s will be there – maybe you should too!