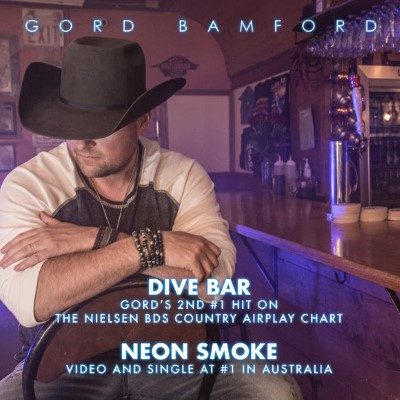 “This is a huge day! Thanks to Canadian Country radio for all the support and dedication on getting this to #1. Great songs still do win I guess, so thanks to John, Ole´ and Tebey for the song. I want to thank Sony Music Canada and Warren Copnick for a fantastic job on “Dive Bar.”

Bamford has received some other great years as well. He recently found out that his single, “Neon Smoke” and the video accompanying it, is not only loved by his Canadian fans but also his fans in Australia, as it hit #1 on the CMC charts in there. Why does this mean so much to Bamford? Well, Australia is where Bamford was born and lived until the age of 5. He is also embarking on a nine-city Australian tour beginning on September 28 before he returns to Canada for his Honkytonks & Dive Bar Tour – a tour that is quickly selling out.

If you want to catch Bamford and JoJo Mason performing in an intimate setting at a small local bar in a city near you, check out the listing below.