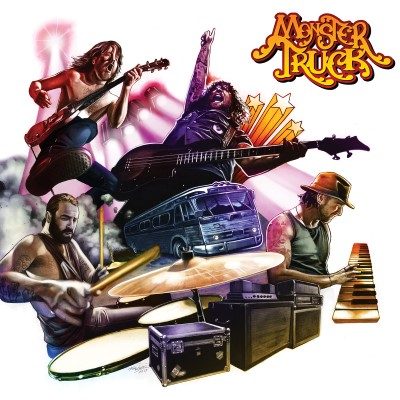 Monster Truck hail from Hamilton, Ontario with 2 albums and 2 EPs under their belt, their latest release True Rockers was ready to be unleashed onto the world on September 14, 2018.

From the opening title track, you can tell this is a high-energy fueled album. The song features Twisted Sisters singer Dee Snider who is a rock legend himself. For an opening track, you can’t get any better, as this song set the tone for a headbanging, heavy rock and roll experience throughout.

“Thundertruck” follows the title song with another high octane, headbanging tune that any classic rock or new rock fan would agree is a great one. “Evolution” follows, which is a perfectly named title. As I mentioned before about classic and new rock fans, this song blends them together with classic rock riffs but also features some gang vocals that sound almost like a choir.

“Devil Don’t Care” sounds like a blues song but still with that heavy rock and roll vibe that Monster Truck are known for. A song like this would make blues-rock fans happy and increase interest in Monster Trucks entire repertoire.

“Young City Hearts” surprised me, as it isn’t as heavy as the other tracks. It has more of a modern radio rock feel. This is a song that encourages group sing-alongs. A perfect mix of every instrument, this song may be the stand out track on the album.

“Undone” surprised me too as it’s slowed down to a more grunge type feel. The solos that happen throughout are flawless and perfectly incorporated making the song one of the best anthem rock songs I’ve heard to date.

As someone who hasn’t heard of Monster Truck until this review, I know I’ve missed out and I will definitely be going back to check out their previous releases. Their heavy rock style is exactly the kind of music I’m into, and I could now be considered a fan of the band.