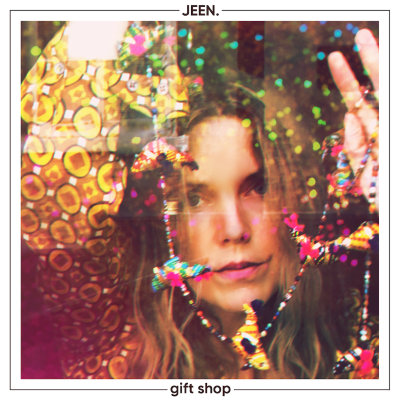 Indie alt-pop songstress Jeen’s newest album, Gift Shop, is a feast for the ears. Brimming with anthemic reverb-fuelled indie-pop, the album was self-produced and is her catchiest release to date—unsurprising for an artist whose works have been featured a variety of TV shows and commercials for Degrassi, MTV Catfish, Google, Panasonic, Estee Lauder, Kraft, BlackBerry, and many more.

A 9-track collection that encompasses both Jeen’s lyrical and vocal prowess, Gift Shop opens strong with electrifying track “Pull Out Your Knives”: Broken Social Scene-esque, “Pull Out Your Knives” is the perfect song to hook listeners in, what with its infectious, pounding beat and emphasis on Jeen’s gritty vocals. From slow-building, early-album “Jungle” to the joyously electronic “The River”, Gift Shop is pop music for people who don’t like pop music.

A stunningly catchy display from top to bottom, Jeen’s Gift Shop is an absolute can’t miss.