By Shayla Obrigewitsch on September 15, 2018 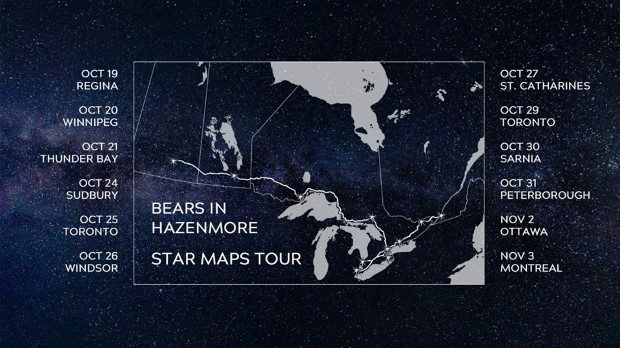 Alt-rockers Bears In Hazenmore have recently announced that they will be going on an Eastern tour in support of their debut album Atlas throughout the second half of October and into November. The tour is titled the Star Maps Tour and kicks off in their home of Regina, Saskatchewan on October 19th.  This will be the bands’ first time through Northern Ontario, and they’re excited to return to favourites like Toronto, Winnipeg and Montreal.

Bears In Hazenmore is a five-piece band that includes the use of reverb-saturated guitars, dynamic percussion, and ethereal brass and woodwind textures. The band features Brady Frank on lead vocals, guitars and keys, Dana Rempel on bass and sax, Darnell Stewart on guitar, Tanner Wilhelm Hale on drums and vocals, and Dalton Lam on trumpet. All members have their roots in Swift Current, Saskatchewan where they met through different musical endeavours.

If you’re a fan of groups such as City and Colour, Aidan Knight or Bon Iver, it’s recommended that you check out Bears In Hazenmore if they’re coming to your city! If not, be sure to listen to their debut album Atlas.