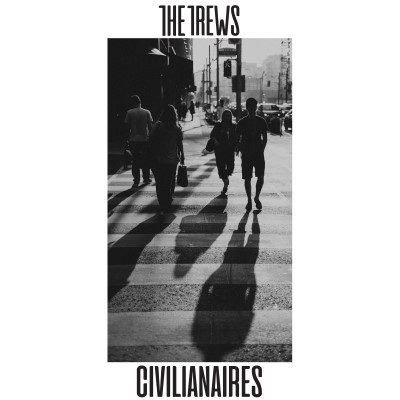 The Trews, certainly a staple in Canadian music, have released their latest full-length album, Civilianaires on September 14, 2018. The album consists of 13 tracks, three of which were released before the album.

The album opens with “Vintage Love”, one of the three singles. Even after listening to it once, it will be stuck in your head for the rest of the day. It is ridiculously catchy, in the best way possible. It has their intrinsic sound tied in with upbeat music that will have you nodding along. “Is It Too Late” is beautifully strung together featuring heavy piano and strings throughout the song. Seemingly about a love that went awry, or perhaps didn’t have the chance to start, the song conveys a message of regret portrayed with strong vocals and harmonies. “No More Saying Goodbye” is full of catchy lyrics and brings a feeling of music from years past, the guitar sounding more like something from the 80s than 2018, which is one of the best things about the song. “Amen” starts with softer, almost soothing and calming acoustic guitar. It sounds as if the song could be another love song about a love that is no longer, but could easily be read as a song feeling loss in general, with lyrics like “if you were so sad, why didn’t you say so? If it was all bad, why didn’t I know?” “Jericho” closes the album with upbeat, high energy lyrics and music. Keys are heavily featured throughout the song, giving it almost a Jazz feel.

The album as a whole is like much of what The Trews do, amazing. Some songs may not be for everyone, but there is definitely something for everyone included. Some songs are very easy to picture in a live setting and will surely have the crowd on their feet or feeling every raw emotion of the story. This is definitely a welcome addition to any Trews fan’s library.