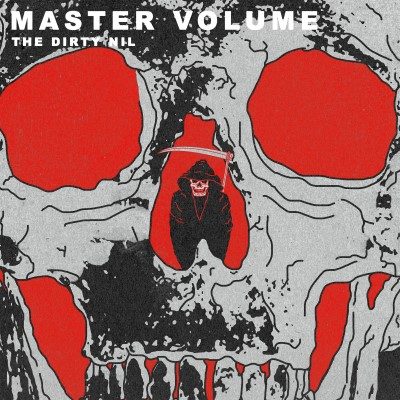 One Line Review:  Hamilton-based The Dirty Nil struts their collective musical stuff with their sassy, rocky, angst-filled, maturely arranged, “hope I die before I get old” coming of age story, Master Volume.

Full Review:  Opening a review with cliché or over-used quote is weak writing, despite an author’s intended usage as a tonal device.  That being said, if you can find that same cliché, or over-used quote, in Latin, now there is serious pretentious academic cred.

“Omne trium perfectum”, or “good things come in threes”, is a commonly held belief, universal teaching, or complete superstition, depending on how one looks at it, that aptly applies to musical performance groups.  There is something inherently impressive with a musical trio in any genre.

Yes, seeing a 13 piece ska band, or a black metal band’s seven members playing in complete synchronicity, is amazing.  Scaling back to a group of three main musicians carrying the work usually assigned to a four or five piece, however, is an impressive feat as few players create the same harmonic, rhythmic and melodic complexity of many.

Power trios such as Cream, the Jimi Hendrix Experience, Oscar Peterson Trio, John Coltrane Trio, the Police, the Violent Femmes, Nirvana, and the Living End exalted music in creative ways that, can be argued, cannot be done with larger groups.

Hamilton-based The Dirty Nil bandmates Luke Bentham (vocals/guitar), Ross Miller (bass), and Kyle Fisher (drums) have been tearing up stages and punching out ears with their raucous mix of alt. rock, classic punk, and hard blues, dialed up to unhinged proportions.

When I first heard The Dirty Nil’s wonderfully raucous Minimum R&B, my reaction was “all the music Weezer should have made after Pinkerton, but didn’t” with “the best parts of Nirvana and a nod to Soundgarden for good measure.”

Master Volume, The Dirty Nil’s newest release, via Dine Alone records, is The Dirty Nil taking their place among the glory-fueled classic rock lineup of yesteryear with a nod to modern masters; T. Rex writing with Thin Lizzy performed by members of Space Hog, the Living End and Local H during a lunar eclipse musical festival on a yet to be discovered planet.

Continuing with the pattern of threes, Master Volume also happens to be The Dirty Nil’s third studio album…if I counted right…

Opening with a crescendo of fuzzed out guitar noise, “That’s What Heaven Feels Like” is a straight strutting, eased paced guitar riff with open vocal harmonies and spacious chorus, a modern rock production including the above classic rock allusions.  The opening track takes its time, pacing out its rock credentials with a catchy melodic, melodic guitar solo, and enough effected vocals to keep the clean production tough.

“Bathed in Light” is riffy and catchy and honestly intense moving into “Pain of Infinity,” mid-tempo angst with dropped tuned bass never losing its melodic hooks and emotional drive.

“Please, Please Me” is their punk rock raucous, reminding listeners they have fast chops and aren’t afraid to use them.  “Please, Please Me” should be on whatever the new driving/ race car / Grand Theft Auto game is coming out this year and, clocking in at the 2:12 mark, will be played on repeat as an early morning pre-work, pump-up, “I hate my job” anti-anthem.

“Auf Wiedersehen” is The Dirty Nil’s mid-90s alt. pop rock moment with a prodding, established, slow melodic setup, “and as long as I’ve got your attention in tune, I mean this in a nice way”, then dropping a hugely exposed explicative deleted for effect.  “Auf Wiedersehen” could take its place among any late night videos premiered after midnight on The Wedge.

“Always High” is an alt. rock cleverly syncopated sing along, “Smoking is Magic” is a no-brainer for any commercial including fast cars, ironic cool kids, or quick cut sport montages (professional Lacrosse would be rad!), and “Super 8” makes listeners want to drive across country without A/C, open windows and waving dangerously out the window in the best real-life buddy road trip movie ever. (Ever!)

“I Don’t Want That Phone Call” is the big, twangy guitar riff intervention theme song that a friend would actually listen to setting up the Master Volume’s closer “Evil Side”, the 6:05 cool jam giving listeners a sprawling, chaotic, epic, Local H style anthem to aurally absorb when laying on their living room or bedroom floor with the lights off, a half-finished glass of libations breathlessly waiting for completion, the hanging air thickened by incense, scented candles, or dilapidated cigarettes.

The Dirty Nil’s new record Master Volume is an impressive listen front to back, a combination of big riffs, chaotic sounds, and angst-filled music intensity with style and personality, a welcome inclusion into The Dirty Nil’s dauntless, defiant, developing catalogue.   A must-have, must-listen for all fans of original alt. rock!

(Also be sure to check out The Dirty Nil’s Minimum R&B because you deserve it!)