PREMIERE – Josh Mover & The Shakers release video for “The Gram” 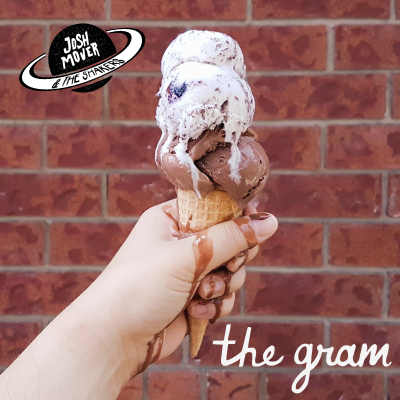 Toronto, ON-based four-piece band, Josh Mover & The Shakers are back with a brand new single, “The Gram”. The song, which was recorded on a rainy August day, was mastered by David Newfeld and recorded/ mixed at Union Sound Company by Ian Gomes. In this track, they take on social media addiction and offer up a satirical anthem for all those obsessed with documenting everything.

“The idea for the song “the gram” was sparked after I was hanging out with my neighbour who, much like the lyrics describe, had bought an ice cream cone, had had a couple of licks of it and then asked me to take a photo of her with it before throwing it away. Living in the documentation-obsessed culture that we do, and knowing my neighbour, I knew that she might use the picture to post onInstagramm. I remember thinking “this is like an episode of black mirror, you can’t put that online.” After that, we acknowledged what happened, realized how absurd it was and then the song somehow came into being.

Like lots of the songs that was I was writing at the time, I originally wrote it on the ukulele and didn’t really think much about it until much after. I posted a little ukulele version of the song on Instagram and because I was encouraged by some friends who asked to hear the song later I brought it to my band and we transformed it into a Josh Mover & The Shakers song. Once we started playing it live, we added the element of using a selfie-stick with a mounted phone on it that is set to the Instagram live feature. We encourage audiences to send the stick around the venue in the hopes of ironically drawing attention to our infatuation of documenting everything under the sun. Whether that idea comes through or not, it has become a highlight of our live show.”

When it came to the video,

“Making the video was a one-day affair. We shot it mostly in my building where I live. We wanted to highlight the duplicitous behaviour that some people exhibit when life becomes all about appearing to be happy and showing off to your followers, instead of actually living a happy existence.

Funny thing about making this video is that people actually misunderstood when I posted a birth certificate on Instagram. The certificate is, of course, a joke that I made for the video. The idea is that my partner in the music video, played by the amazing Shanda Bezic, have another child because our first born has stopped generating enough likes on Instagram, so we decide to spawn again.

So, naturally, I made a mock birth certificate for our second born, aptly named Graham Shaker, and posted it online. I thought I was pretty clear in pointing out that this was a tease for the video coming out, but I started receiving congratulations from as far away as Sweden and Kazakhstan. Goes to show, people consume media quite uncritically online.

Check out the video above, and if you’re able to catch Josh Mover at a solo show at Antikka Cafe on Sept. 15th which starts at 2 pm. He has a music residency at the Banff Centre for Arts and Creativity this fall. After that, he and the Shakers will be hitting the stage again, so look out for them!