PREMIERE – Angela Harris releases video for “Should Have Known” 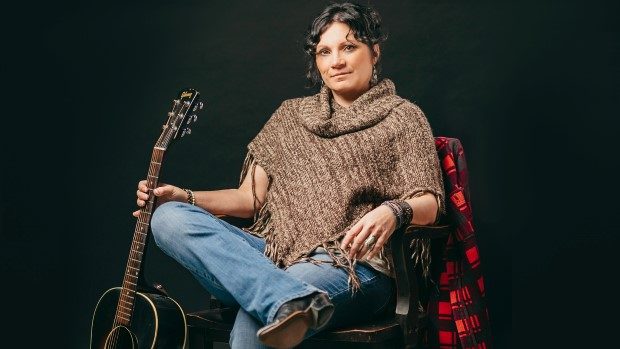 Chilanko Forks, BC-based alt-country/ roots artist, Angela Harris has released the video for her newest single, “Should Have Known” from her upcoming album, A Woman Like Me which is set to be released on October 25, 2018.

Harris shares on the video,

“This is the first music video I’ve ever done. My music and the industry has changed a lot since my earlier work,  and my demographic is merging to a more millennial base, so it made sense to connect my fans to my music in this way. Considering the message in “Should Have Known”, we wanted to showcase confidence and strength in the video, as well as display the emotions that one might be feeling after experiencing a breakdown of trust in a relationship. We also wanted to present the importance of moving forward so to get this all in, we decided to incorporate natures dark and dramatic visuals with lots of movement and place me inside it in a simple, down-home, straight forward and personal way. It was shot by Lucho Berzek from Vancouver, BC at Farawayland Studios and my dearest friend Jennifer accompanied me on the shoot to assist where necessary. I enjoyed interpreting my music in this way and am thrilled to be sharing it  with music lovers far and wide.”

Check out the video below, and find out more about Angela in our Five Questions With segment.

If I were to paint a picture of my life it would likely include high mountains peaks, canyons, a gnarly forest, a rapid river, deep dark caves and whirling clouds of white and grey with a few streams of sun rays beaming through. And there’d be an eagle nesting with her young on the highest tree top where she protects her little ones from the chaos below. Yes, my story is quite complex, but in a simple way.

I grew up with my younger sister and brother in Chilanko Forks – a rural community nestled in the heart of the Chilcotin region of BC. In my early years my Grandpa and Dad ran a trapline in the winter and a sawmill in the summer while my mom cared for us kids, helped the men where she could, and kept the wood stove fed. We grew a garden, raised pigs, hunted, fished and worked hard to keep the cabin warm and food on the table.

I have very vivid memories from that time in my life and often wish I could snap my fingers and be back in the wild outdoors writing songs and singing classic country songs while the birds and squirrels messed about. The wilderness was and still is, where I am most comfortable and the best version of myself.

But it wasn’t all hard work. There were plenty of good times too, and where there was fun, there was good people, laughter, and of course, music.

My mom was a performer and songwriter who brought her joy for singalongs to our family home. Watching her play and connect with people through her songs taught me about the power of music. I started singing harmonies for her at an early age, picked up the guitar at the age of 13 and wrote my first song. Writing was a form of therapy for me so I did it all the time; even while I was working, or at school, or with friends; I was always writing songs in my head. It’s still that way for me.

The elementary school in Chilanko Forks was Puntzi Mountain Elementary and consisted of 99% first nations students from the Tsilhqot’in Indian Band. Ths school only went to grade 9 so us rural kids travelled to Williams Lake every Sunday and lived in a dormitory during the week so that we could attend high school. After last class every Friday, we’d grab our bags, hop on the school bus and travel back to our country homes down Highway 20 for the weekends.

I graduated in 1989, started fronting my first band, got married and had three daughters. I had a passion for writing songs and a wildfire burning in my belly so I mustered the courage and ventured off to Nashville in 1992 to pursue a career in music. For the next decade, I cleaned houses to afford my trips between home and the Music City to hone my craft, learn about the business, and network. I played in the local clubs, festivals and banquets and I hit the studio in 1999 to record my debut album with award-winning producer John MacArthur Ellis from Vancouver, BC. I released it in the year 2000, said goodbye to a broken marriage, packed up my daughters and moved to Vancouver to start a new life. I tell this part of my story in the title track of my upcoming album ‘A Woman Like Me’.

In 2001 I took my last trip to Nashville and was offered a 7-year development deal which I turned down due to my lack of interest in having to let go of my authentic style and merge to a more ‘pop’ sound. I returned home feeling defeated, hung up my guitar and called it quits…or so I thought.

A few months later I received a call from fellow singer/songwriter and friend, Nadine Davenport (who founded Grrrls with Guitars) asking me if I would play one of the stages at the Vancouver Folk Music Festival. I never saw myself as a Folk/Roots artist at the time, but she insisted that I would be a perfect fit, so I decided to do the show. It changed my path forever. I picked the guitar back up and wrote my 2nd album “Roots”.

Since then I have toured in Canada, England and the US, won awards, signed 2 record deals (Canada and the UK) played on stage with brilliant artists, released records, raised my three daughters with the love of my life and create partner, Eric Reed, my family, friends and kind neighbours, and made a home for us on the west coast. I truly love the ocean and coastal mountains but a big part of me still resides deep in the heart of the Chilcotin, where it will remain forever.

I write for therapeutic reasons mostly, but sometimes I write when I’m feeling inspired by something that I read, see or experience. I’m constantly writing songs in my head and am always writing down hooks, lyrics, titles or ideas. They come to me when I’m awake and when I’m asleep and when something comes that I feel others might want, or need to hear, I record it and bring it to my shows in the off chance that it helps them through a rough patch, draws up a memory, or inspires or motivates them in some way.

I’m playing a Songwriters in the Round gig called SongStage on November 29 in Port Moody, BC and am in the midst of planning my album release event. In truth, I took these last three years off to do some personal work, support my daughters through their graduations, prepare them for adulthood and create my new album ‘A Woman Like Me’ (which is scheduled for release on October 25, 2018) so I’m just starting to book shows for 2019 now in support of my new record.

Intimate listening rooms, festivals and house concerts are my favourite shows to play cause it brings me closer to the people and feels like ‘home’. I’m a bit of a storyteller and am known to engage the audience in a few classic singalongs from time to time. And when playing soft seaters, I like to call up the house lights to ¼ so that I can see all the beautiful faces in the room with me.

I’m an original artist (but may throw in a favourite cover or two for fun) and play solo, as a duo, trio or band.

‘Still’ is my most treasured piece. It is set for release on Sept 17 and appears on my upcoming album ‘A Woman Like Me’. It took a lot of personal strength for me to write and release this song due to the tenderness of my own pain but its message binds us as one so I felt it was important to share it.

I’m drawn to artists and bands who are authentic, passionate about their work, dynamic and stylistically original. I’m a big fan of Ridley Bent and saw Hillsburn at CMW 2018 and they really impressed me.

But my interest in Canadian artists and bands goes much deeper than just the music. My journey through the early 2000’s led me to launch my own business Fair Wend Entertainment Services in 2010 where I offer music marketing, development and management services to independent Canadian artists of all levels and genres. To date, I have assisted over 100 music creators and am currently managing award-winning Alt-Country/Roots Rock producer and multi-instrumentalist John MacArthur Ellis, as well as Hip Hop/Rap artist Terell Safadi from Vancouver, BC. I believe that collaborative efforts and teamwork are the keys to real success, and have recently teamed up with sound engineer and multi-instrumentalist Eric Reed and John MacArthur Ellis to begin developing a music community in Vancouver that works together so that we can all earn a living doing what we were born to do.