Review – A Fawn At Dawn 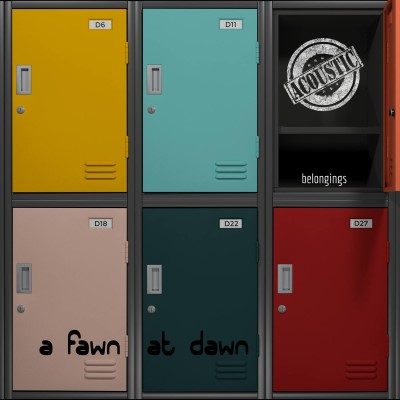 Being a musician allows you the creativity to take your songs and rearrange them to suit how each song was envisioned. That is just what A Fawn at Dawn did with their debut EP Belongings. Originally released in March 2018, the band brought out a re-release of the album in acoustic form.

The Quebec City-based alt-pop duo, comprised of David Lamothe and Dimitri Fortin, is described as a band with “spur of the moment, home studio hooks and melodies with coffee shop lyrics.” According to their bio, they explore “the sweeter side of nostalgia, flirting with a lighter stage of melancholia with a sense of freedom and hope.”

According to the band, Belongings can be described as  “a collection of songs that play like a flipbook of polaroids when you reach the bottom third of a good bottle of wine.” From this, I envision an EP full of memories.

The EP begins with “Between Clocks and Walls”, a track where the lyrics and melody alternate between a slower pace to a faster pace. This change ns speed at times helps to capture the attention of the audience. Channelling their creative side, the hand clap percussion at the end added a nice touch as the song finished with only clapping and vocals as the melody faded away.‘Cautious Lovers’ has a laid back, spacy vibe created between the lead guitar, backing vocals and the addition of reverb. This impression definitely suits the lyrics as the band sing about the actions of cautious lovers and nauseous loners.

“Mind Sounds” was a stand out from this track. From the first note, it brought me back to the late 90’s/early 2000’s alt-pop era. There was a unique timing between the vocals and guitar (an interesting experiment in rhythm) and the addition of background instruments used to create a fuller sound.

“Foxes “has a solemn feel to it at the beginning. Towards the middle of the track it seems to take on a more hopeful tune, as the lyrics state “with a bit of luck I bet I’ll travel far and if all goes well I’m sure I’ll make it back.”

The EP finishes with “And I Forgot”. This track sounds different from the rest, with a more positive, upbeat melody. The creative lead guitar and piano aid in adding weight and depth to the track. It is worth a listen.

Overall I really enjoyed the tracks on the album. It reminded me of some of my favourite songs and bands from the 90’s/2000’s alt-pop era that I haven’t thought of in a while. It was also great to see more stripped down tracks instead of one full of bells and whistles. Definitely take the time to check out A Fawn at Dawn and look out for new, more electric sounding songs from them in the near future!