Home / Promos / The Journey Tour 2019: Paul Brandt, Jess Moskaluke, High Valley and the Hunter Brothers come together to serve up a spectacular show across Canada

The Journey Tour 2019: Paul Brandt, Jess Moskaluke, High Valley and the Hunter Brothers come together to serve up a spectacular show across Canada 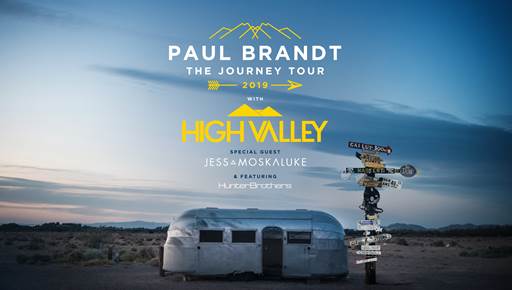 What happens when the best of Canadian country music come together? Fans get to see an epic performance. The Journey Tour is big and something of this magnitude has never been offered to the public in Canada, until now. These four acts are so unique in their own right and when you see them all on one stage, on the same night, it will be a night that you soon won’t forget. Along with superstar Paul Brandt and multi-CCMA Group or Duo of the Year winners High Valley, this tour includes special guest Jess Moskaluke and features the Hunter Brothers.

Here are some fun facts about the artists:

High Valley – this two-time CCMA Duo or Group of the Year are enjoying the biggest success of their career with a #1 single in Canada and a Top 10 hit in the U.S. to go along with five gold singles and a Gold-certified album.

Jess Moskaluke – she is a JUNO Award winner, is a three-time CCMA Female Artist of the Year and is tied for the most CCMA nominations this year with six, including the Apple Music Fans’ Choice Award.

Hunter Brothers – when these five brothers are not working on the family farm, racking up millions of views on Facebook or releasing hit singles like the recent Top 10 smash hit “Those Were The Nights,” they are enjoying their three nominations this year at the 2018 Canadian Country Music Awards.

All four acts are very pumped about this 21-stop winter 2019 tour.

“The artists I have the honour of performing with on this tour are incredibly talented, successful and also some of the best friends I’ve made in the music business. There is a palpable energy and chemistry when we are in the room together and I can’t wait to bring that to stages across Canada. The Journey Tour will combine talent and artistic vision in a way that Canada has not yet experienced; all of the artists involved are committed to making this tour one that country music fans will never forget.”

“Every artist on The Journey Tour attributes career success to the support of Canadian country music fans. We’d be nowhere without them.”

“We can’t wait to celebrate with our Canadian fans. There will be more than a few front row high fives.”

MDM Recording artist, who also happens to be a newlywed, is thrilled about this tour. Jess Moskaluke says,

“I am doing what I love and loving every minute of it. This has been the biggest year of my life and I’m so excited to be joining The Journey Tour with Paul, High Valley and fellow Saskies, those Hunter Brothers.”

J.J. Hunter, the oldest of the five Hunter brothers, says,

“All of The Journey Tour artists have a ton of mutual respect for each other, and a passion for our communities and our country. We all love to use music to inspire, help people escape and simply to have a great time. I just know this will translate loud and clear to the audiences we’ll be seeing across Canada. We love our fans and each other. This just feels like family. This will be a journey we’ll never forget!”

Fans purchasing tickets for all but three of the shows will also receive a digital download copy of Paul Brandt’s new album The Journey BNA: Vol. 2 (*see tour dates below for exceptions).

If you want to pre-order The Journey BNA: Vol. 2 prior to its November 9 release date, please click here.

* Digital download copy of The Journey BNA: Vol. 2 not included with the purchase of the ticket.
**Paul Brandt, Jess Moskaluke and Hunter Brothers performing (High Valley will not be performing at the Thunder Bay show)