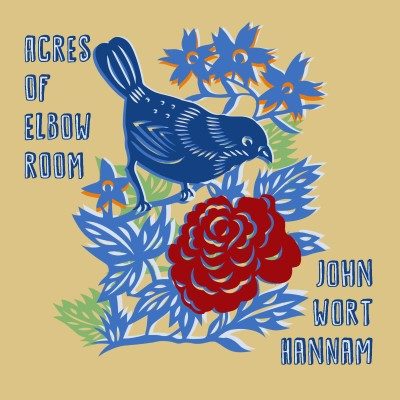 John Wort Hannam is onto his seventh album with Acres of Elbow Room; the Juno-nominated singer/songwriter started his journey at his kitchen table writing the songs that would later make up his debut album Pocket Full of Holes in 2003. For over a decade Hannam has been making music and touring across Canada. Through his six-album career span, his list of accolades and nominations continues to grow; awards from Canadian Folk Music, CBC Galaxie Rising Star, and Kerriville Texas New Folk, to name a few.

Acres of Elbow Room read like the story of a man who has been through and seen a lot in his life; a diary full of adventure, of love and loss, curiosity and regret. Hannam’s musicianship is seasoned in every aspect of this album. You’ll feel his sorrow on the gorgeously heartbreaking ballad “Key of D Minor”, but not before you’re tapping your feet and dreaming of the open road on the title track “Acres of Elbow Room”. Find yourself in a romantic indie-movie setting with the sweetness of “The Quiet Life”, appreciating the simple things on “I Believe” or the heartbreak felt in “Ain’t Enough”; a few highlights from Hannam’s latest collection.

Through each song comes a vulnerability and honesty from a songwriter who has clearly experienced a range of emotions and milestones in his 50 years. Hannam is a masterful storyteller – effortlessly plucking away at his acoustic or delicately pushing on the ivory keys. One song after another, Acres of Elbow Room will move you.