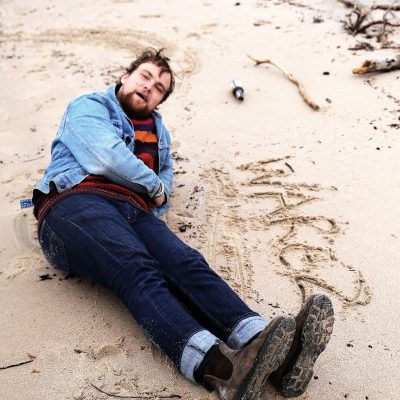 Andrew McArthur, aka Warez is a 24-year-old musician from Orangeville, ON. Today, he releases his first single, “Four Walls” from his debut self-titled solo album.

Andrew shares on the single/ video,

“‘Four Walls’ is the first single from my debut solo record, which is self-titled, “Warez”. The video, directed by Sara May of Falcon Jane, is a visual throwback to 90s computer culture. Our generation spent a lot of time on the computer as children, as I guess we all do now. There are a lot of images from that era that are stuck in my brain, permanent nostalgia. Computers, early internet, and video games really shaped how we grew up, and this video is an ode to the screens that raised us. “Four Walls” was inspired by the passing of my grandfather, George Phillips (Pops). He was a unique and interesting man, and his death caused me to reflect on my own life, especially my childhood. I recorded almost everything myself, mostly in my bedroom. The drums and piano were recorded at the church that my family has been part of for almost 100 years, where Pops spent a lot of time volunteering and taking care of the property. Spending time alone in the church making music, allowed me to be close to Pops and feel his presence while I played. “

Check out the video below, and find out more about Warez in our Five Questions With segment.

My name is Andrew McArthur. I’m a 24-year-old musician from Orangeville, Ontario, Canada, and I create music under the moniker “Warez”. I play in other musical groups such as “Devin and the Dark Light”, “Justin Mcdonald Band” and “Falcon Jane” I recently made a record and will be releasing it in December!

I make music in my bedroom, I play all of the instruments and record it onto a multi-track device. Usually, I develop a guitar or piano riff and try to record it while I am making it up. I will try to write the drum and bass parts soon after so I can keep the magic flowing. I probably have A.D.D or something so once I start I need to be quick or I will get bored of the idea. Overall my music is feel good, freaky, chill stuff. guitarmonies, piano jangles, and groovy bass/drums.

I currently do not have any shows coming up. I play a lot with the other groups I am in, and releasing my own music is kind of a new thing for me. I hope in the new year to get some pals together and play some shows in Ontario.

Recommending only one of my songs for someone to listen to is a pretty hard question… I guess I would recommend “Four Walls” because it is the only song released currently!!! but once the album is out y’all should listen to the whole dang thing.

There are so many awesome Canadian bands out right now.. and the cool thing is I even kinda know some of the people in them! Some bands I really like – nutrients, Champion Ski, Living Hour, Anemone, Helena Deland, Rust Eden, L CON, AMC Gremlin, Erin Bolton. There’s more but I could be at this all day!

Share this:
Related ItemsAndrew McArthurCanadianfeaturedFour WallsInterviewontarioOntario MusicOrangeville ONpremiereWarez
← Previous Story Maddy talks with The Faceplants in Oshawa, ON
Next Story → Five Minutes Or Less With The Roxborough