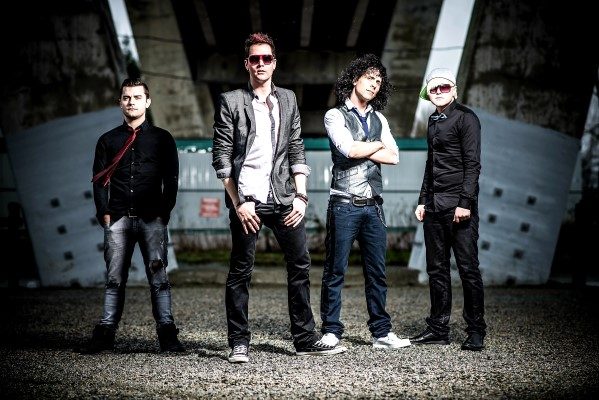 With six years since the release of their last album Lost in Paradise, Mission, BC pop-rock band Faber Drive are making their triumphant return to the music scene. With career hits such as “Tongue Tied”, “When I’m With You” and “Get up and Dance”, they bring us a new hit, “Surrender”. It’s an honour to be joined by all members of Faber Drive; Dave Faber, Seamus Oneill, Jordan Pritchett (JP), and Jeremy “Krikit” Liddle to answer a few questions about the new music and what’s to come in the future.

Your fans haven’t seen you guys in a while. What have you been up to in your spare time? Music, hobbies?

We’ve all been living life to its fullest. I’ve (Faber) now got 4 children and my oldest Isaiah is 19. He’s big into the underground music scene. He goes by the name of “Powfu” and he’s getting a ton of amazing reviews as well as over 200,000 streams on Soundcloud and almost 100,000 on Spotify. Check him out if you get the chance. I’ve also been producing and writing a ton.

JP has a girlfriend (Danielle Marie) who’s in a band with JP and they rock as well! Check them out on Facebook, Insta etc as they post a lot of killer acoustic songs.

Krikit has been livin’ it up in North Van and jamming with a couple local cover bands to keep his chops up.

The brand new single “Surrender” is the bands first official release since your last record Lost In Paradise back in 2012. Would you mind telling the readers at home where the inspiration for the song came from and what it means for the future of Faber Drive?

Our new single “Surrender” was inspired by a very rough time in my (Faber) marriage. I showed up to the writing session telling the guys that I couldn’t even think straight because me and my wife were fighting so much. It felt like we were literally fighting and yelling about everything from finances to the children, the toothpaste to physical touch, groceries to dishes. It was a horrible time in our marriage but this song came from that. I felt like no matter what we were fighting and screaming about or how much we felt negativity towards each other, we still had to stick it out and never give up. The opening lyrics,

“When did this love become a war?
I don’t know what we’re fighting for
These angry words just leave us numb
We used to kiss into the night
gentle hands in candle light
I can’t believe what we’ve become”

really hit home for what I was feeling at that time.

We are really hoping this song resonates with our longtime fans and captures a new audience as well. We’ve got a lot more music coming but how soon we are able to finish it all depends on how well people react to this song. Basically, we really need our fans to help right now by posting, liking, streaming or buying this song as much as they can because we are fully INDEPENDENT now and without a record label to help us.

You guys seem to collaborate with many different artists in the past, Belly, Simple Plan and Jessie Farrell. Do you guys have any collaborations planned for the future?

We love doing collaborations and we are hoping to work with Simple Plan again soon. We will also be doing some collaborations with my son “Powfu” and there are a bunch of others in the works.

Is there any Canadian artists on repeat through your playlist at the moment?

JP: Drake and Sons of Daughters.

Faber: Sons Of Daughters and Dean Lewis “Be Alright”.

Given the band’s history has there ever been a career milestone that stood out to you personally? Pesomethingmthing you would hope to achieve?

It’s funny being an artist as you always feel like you want and need to achieve more. The first big milestone for us was when we heard “Second Chance” on the radio for the first time. Then the next big one was signing a record deal, then touring and then getting our first platinum-selling single. We really want to get back out there touring and hopefully see some more of the world like the Philippines, Japan, the U.S., Europe and of course all of our hardcore Canadian fans again too!

If you were stranded on a desert island, what would be one thing you could not live without?

With the music charts consisting greatly of hip-hop music these days. Do you feel as a pop-rock band in 2018 presents more challenges for you as artists compared to back in say the early 2000’s?

Ya music is always changing and always evolving but for us, we just want to make great music that first of all we believe in, our fans and then the rest of the world. We love that bands like St Lucia, Simple Plan, and Imagine Dragons and artists like Ed Sheeran and Shawn Mendes keep releasing great music.

Do you have any guilty pleasures? Junk food? Chick flicks?

Faber just bought a Nintendo Switch with Zelda and Mario Kart but hasn’t cracked it open yet cuz he’s too busy with all the new Faber Drive stuff. He also just quit drinking till Christmas but not sure if that qualifies for a guilty pleasure. lol. Another guilty pleasure is McDonalds filet o fish, sushi from Sushi Te in Mission BC and the “beyond the meat” burger from A&W.

We are just so thankful to all of our fans who have stuck with us through thick and thin! Please like, love and share! Be good to one another.