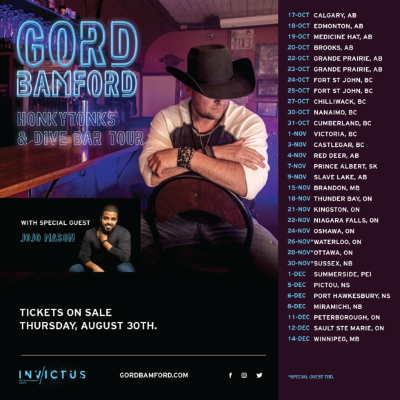 Canadian country music star and Platinum-selling Sony Music Entertainment Canada recording artist Gord Bamford will hit 29 cities coast to coast two months to celebrate the release of his latest single “Dive Bar.” And, this tour won’t be at the larger venues that you are used to seeing Bamford at. Honkytonks & Dive Bar Tour brings fans up close and personal because this superstar will be performing in an intimate setting at small local bars.

Says Bamford of this tour,

“Honkytonks and dive bars are where I cut my teeth in this business and fell in love with country music and performing. It’s where I feel right at home. I’m looking forward to getting back to my roots where it all began. Make sure to grab your tickets fast cause it’s gonna be a party!”

Bamford will be performing many of his hits including his current single, “Dive Bar” from his latest album Neon Smoke. The album has also seen the release of the singles “Livin’ On Summertime,” “Ain’t It Grand” and the Top 10 Canadian country radio hit “Neon Smoke.”

Supporting Bamford for 28 dates will be JoJo Mason. Mason has four Top 20 singles under his belt and the SiriusXM “Rising Star” Award nominee recently released his debut album Both Sides of the Bar, with his latest single “Something to Wrap my Heart Around” reaching #8 on the Canadian Country charts.