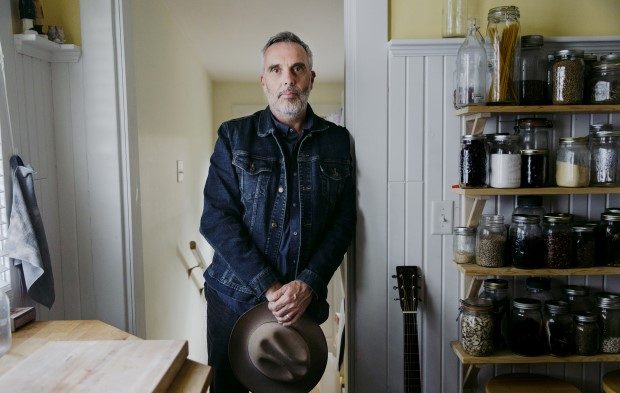 Alberta’s John Wort Hannam is about to release his brand new album, Acres of Elbow Room on September 7. Recently, he released the first single from the album, “Key of D Minor”, a song he wrote about his battle with depression.

John shares on the single,

“It is the one song where there is no guitar and the piano takes the spotlight,” says John. ” I merely sing on the track. I wanted the song to sound sparse, almost empty, to represent the subject matter. On a thematic leve,l it is unlike any of the other songs. I grew up in a generation where people whispered about depression, like it was a dirty town secret. Men especially were perceived as weak if they vocalized their struggles with depression and anxiety. The song is the most personally revealing song I’ve ever written.”

John will be touring in support of the album, check out the complete tour listing below, and find out more about him in our Five Questions With segment.

In 1999 I heard the song “April Fools Day Morn” by Loudon Wainwright III (Rufus’s dad). It changed the way I listened to songs. In 2001, I quit my teaching job and spent 10 months depleting my savings while sat at my kitchen table, wearing a lucky hat, writing my first ten songs. Those songs would become my first recording Pocket Full Of Holes, released in 2003.
Seventeen years later, I’m releasing my seventh full-length recording Acres Of Elbow Room and also have a few feathers in that lucky hat for my first six offerings that I’m kinda proud of. Feathers that include a JUNO nomination, a Canadian Folk Music Award for Best Album of the Year, A CBC Galaxie Rising Star Award, and a Kerrville Texas New Folk win.

Recent years have seen a great deal of change in my life – becoming a Dad, turning 50, a move to the big city (Lethbridge), a marital reckoning, a long, deep bout of depression, and episodes of losing my singing voice. But I like to think I’ve emerged a better songwriter, a better singer, and a better player.

I write and perform lyrically driven roots music. The songs on the new album are very much about the theme of change – changes I see in the world around me, my life, my son, my worldview, and philosophy to living a balanced existence.

We are a five-piece band with upright bass, drums, keys, fiddle, and guitars. The live show highlights the musicianship of a pretty firecracker backing band, imagery-laden lyrically driven songs, three-part male harmonies, and a good dose of up-tempo rip-snorters and lonesome ballads. We’re currently on tour in support of my new album ‘Acres of Elbow Room’ (out Sept 7th), here are the dates:

I think the title track Acres Of Elbow Room is a pretty good snapshot of the kind of tunes and sound the band is producing these days.