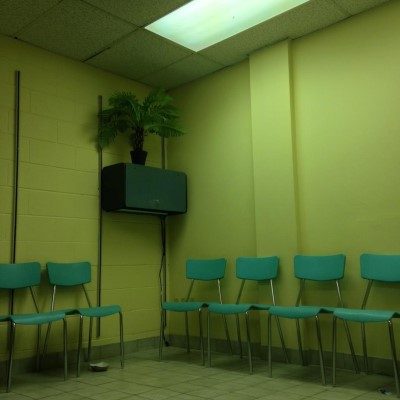 Following their acclaimed singles, Toronto duo, Teen Ravine have released their eponymous debut album. Comprised of chill beats, these evocative tracks play with and stir emotion. These tracks were born out of the collaboration of Nick and Dan in the spring of 2016; Nick had then parted ways with his long time girlfriend, and Dan had suffered a concussion that confined him to ha room for a year. Born out of this trying time was the album, Teen Ravine.  These intimate bedroom recordings boast west-coast pop and R&B influence of the late ‘70s and early ‘80s, playing on themes of emotional alienation and fear of intimacy.

The album opens up with the shimmering synths of  “Hall of Horrors”. Its heavy bass and smooth vocals create a relaxed atmosphere. Reverb on the on this track makes its lyrics evocative: “a mirrored hall of horrors” echoes and wanders as if it is lost in a space. Its production is very Bon Iver-esque. The track seems to serve as a moment caught between waking and sleeping.

Upbeat “Friend of a Friend” follows next. This single boasts strong ‘80s influence, the sort of track that would be featured in an ‘80s coming of age film – even delving into a bit of jazz.

“Bad Dream” is the third single in a row on this LP. Its ambient guitar and ‘70s influence make it a contender for a perfect bedroom jam. Whereas, “Steady On” is a psychedelic and moody track, boasting an otherworldly quality.

The rest of the tracks on the LP remain as exciting as the singles, featuring rhythmic “Stay”, moody “Only You”, groovy “Above Average”, and glossy “Permanent Honeymoon”.  Acoustic track, “This One Time” brings the album to an end on a nostalgic note.

The tracks of Teen Ravine have received great praise and for good reason.  These melodic songs evoke serenity but also tap into one’s subconscious with their themes of fear of intimacy and emotional alienation.