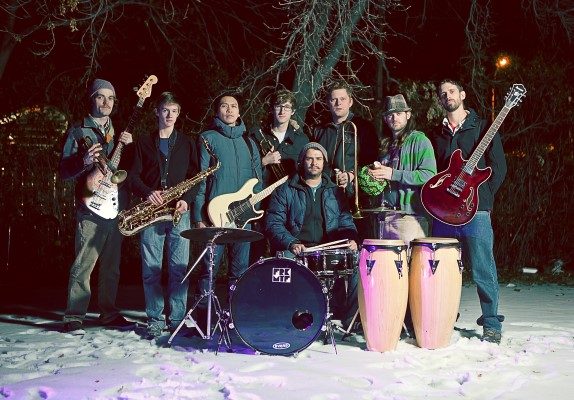 Calgary, AB-based big band Freak Motif will soon be releasing their second full-length album, Hot Plate. Today, we are happy to help the 8-piece band unveil the video for “Tierra”.

“We play a lot of afrobeat and Latin-influenced grooves live, and we wanted a simple groove that just makes people want to dance. We recorded this song in Montreal during the summer, where there’s so much great music happening, and the feeling of celebration is infectious.”

When it comes to the video, which was created by LA-based Dan Lin, the band comments,

“Tierra was filmed in Los Angeles, as well as some parts of Mexico City and Baja California.  Though outwardly tranquil, the work explores an underlying tension between earth’s natural environment and the ever-expanding sprawl of human development, as well as the aspirations, apparitions, and anguish of our contemporary culture. Behind the menagerie of collage begs the eternal question, ‘What do I see?’”

Check out the video below and find out more about Freak Motif in our Five Questions With segment below.

FREAK MOTIF is an 8-piece dance party. They became a band by accident… The first jam session turned into a parade one Wednesday night, and it kept rolling from there. Hundreds of shows, 1 album and a couple EPs later, the Freaks are set to release their first LP on vinyl… HOT PLATE!

Funk, afrobeat, hip-hop and a love of improvising influence our music. Our studio process and live process are similar – the rhythm section comes up with a groove and works out an arrangement, keeping it as simple as possible. Then the Weapons of Brass Destruction come up with a melody, a counter melody, maybe a solo, back to the first melody… The focus is always on feel over doing anything complicated.

Album release party in Calgary at the end of October, and it’s to be announced, so stay tuned!

Tierra! Really represents the Freak sound with an upbeat afro Latin groove, super simple and catchy horns, and percussion that chugs along and makes you want to move.