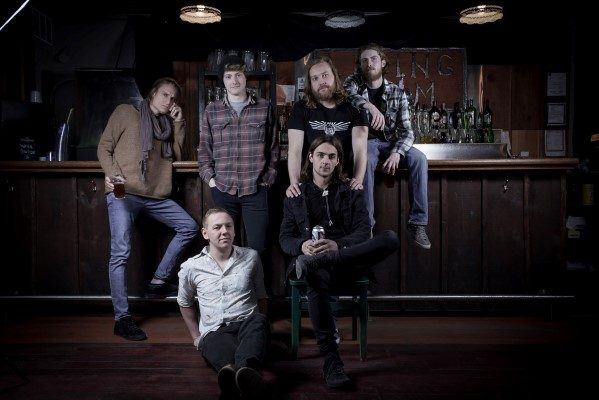 Welcome to this month’s Indie Spotlight featuring Canadian rock band, The Wilderness. While they are very lyrically folk driven, their music is melodically rock and roll. Back in 2015, Henry and Sacha turned up at an open mic at a café where lead singer, Jonas, had been working at the time. When the open mic ended, Jonas asked to join and they all played a few songs together. “After that, I asked them (or as they say) begged them to start a band, and we had our first rehearsal the next day” (Jonas).

Now, The Wilderness has their newest single, “Dancing in the Dive Bars“, set to be released at the beginning of September. After their debut and very successful, first single “Hurry Up and Wait“, “Dancing in the Dive Bars” represents an integral part of the band’s quest to bring the power of their live performances into a studio setting. The song is a celebration of the beauty and happiness discovered in life’s darker moments and the importance of connecting with those we love in the face of life’s challenges.

The Wilderness’ musical influences vary a lot, but they share a common few like Vulfpeck; Bruce Springsteen; and fellow Kingston Band, The Glorious Sons, to name a couple. In terms of non-musical influences, Jonas is largely influenced by the people that he interacts with on a daily basis: “I am constantly amazed and inspired by the people I have in my life and they help me develop as a human and as a musician more than they could ever know.”  However, The Wilderness’ songwriting has taken on many different forms over the years. In the beginning, Jonas and Karl had written songs before the bands and adapted them like “Springsteen Songs” or “Heartbreak Blues“: “but every song that was written before the band has grown into its own entity and are completely different to how they were when they were first written” (Jonas).

On the whole, their music has evolved so much since the beginning. They have a greater appreciation for dynamics and have played almost 400 shows at this point. It could be because now their songwriting is much more collaborative, where Karl, Liam, and Jonas bounce ideas off one another and bring them to Henry, Sacha, and Nick for compositional concepts. Every member of The Wilderness wants the band to go as far as it possibly can. Although they don’t want fame and fortune, they want long and successful musical careers. Jonas hopes to achieve some of his childhood dreams like touring the world, playing Bonnaroo, Glastonbury, and Redrocks.

If you want to check out this up and coming Canadian rock band, head to their website or take a listen to some of their Spotify hits.