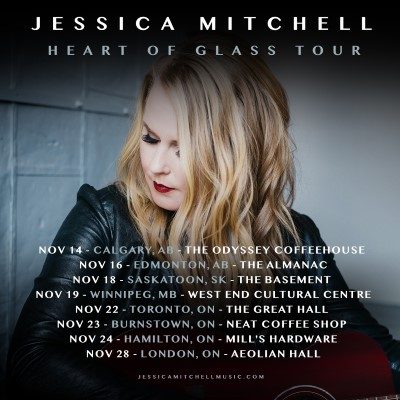 Singer-songwriter Jessica Mitchell has had a stellar 2018 with the release of her critically acclaimed debut album Heart of Glass, her cross-country tour with Johnny Reid in the spring, nominations for CCMA Awards for Songwriter of the Year and Roots Artist of the Year, taking to the stage at the CCMA Awards in Hamilton during the live televised broadcast on September 9. Adding icing to the cake  – in November, Mitchell headlines her first solo tour.

On September 5, Mitchell will release her single with the video, “Maybe It’s Me.” The ballad is full of emotion and her powerful, Adele-like voice is beautiful, crisp and shines through. You get lost in this one.

On October 1, Mitchell will also join country icon Terri Clark for a special performance at City Winery in Nashville, and on October 3 she’ll take to the stage at Cambria for her first solo appearance in Music City.

Prior to her solo tour, Mitchell will join country star and songwriter, Dean Brody, on several of his east coast acoustic Dirt Road Stories tour dates.

Right after her performances with Brody, Mitchell will wow the country on her first-ever solo tour. Heart of Glass tour will start on November 14 in Calgary and end in London on November 28, it will be a jammed-packed two weeks for her.

Says Mitchell about this tour,

“For the first time ever, I’m going on my own tour. I’m so excited to support this record live just for you. Please join me for the #heartofglasstour, an evening of music and stories this November.”