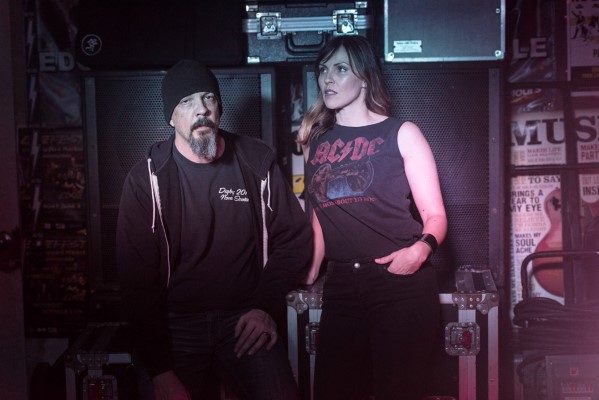 In July, they released their debut single, “Armor“, and now they have unveiled a music video for the single. Take a look at the video below, check out their newest single, “Like Water“, and find out more about them before they release their debut album, A Minor Conspiracy in October.

We are Karen & Mike Penton, husband and wife duo from Summerside, Prince Edward Island, who make up Soul Filter. We’ve been playing in bands together for the past 15 years.

Alternative Rock-pop with a just a touch of folk mixed in.  Acoustic rhythm and sweet melodic electric guitar riffs intertwine with soul-baring lyrics & catchy melodies.  Smooth bass lines and in-the groove-solid drums beats.  Our sound is influenced from an eclectic mix of bands like The Cranberries, Alanis Morisette, Sheryl Crow, The Tragically Hip, Holly McNarland and Sass Jordan, so a bit of a 90s era feel.  Karen does a lot of the main songwriting.  Sometimes she justs hears a lyrical phrase or melody in her head as a starting point, sometimes she gets inspiration from hammering out chords on the acoustic.  Once the main idea has been developed, we hash out the rest of the song together.  Or Mike will come up with guitar ideas, and Karen will throw in the melody and lyrics.

We have an acoustic show coming on August 30th in our hometown at Spinnakers Landing.  An outdoor, all ages show as part of their summer series.  For this show, we will perform songs from our upcoming album, A Minor Conspiracy (due out in October) as well as songs from artists who have inspired us.  A lot of heart & soul, energy and passion goes into every performance.  We don’t feel we’ve done our job unless we’ve made some type of connection with the audience; they are just as much a part of the performance as the band. We’ll announce more shows as we get closer to our album release.

We just released our second song “Like Water”, but I’d have to say “Armor” as it showcases our sound the best, so far.

We are really lucky as we have so many amazing Canadian artists!  We have been influenced by many of them over the years… but for current artists, we would say, Matt Mays, The Trews, Joel Plaskett, The Motorleague, Monster Truck and Ria Mae.  And there are still so many out there that we have yet to discover!