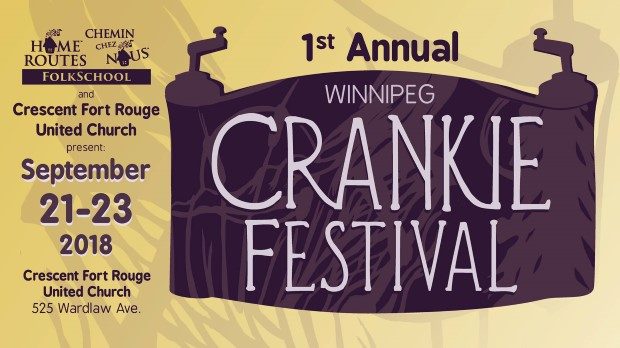 Home Routes/Chemin Chez Nous Folk School is hosting the first annual Crankie Festival at Crescent Fort Rouge United Church and it’s happening from September 21 to 23. 2018. This festival features many folk artists and musicians from Winnipeg and beyond.

What is a “crankie”? A crankie is an old storytelling art form popular in the 19th Century and a forerunner of modern day film. This art form uses a long illustrated scroll that is wound onto spools on each end. The spools are loaded into a box that has a screen for viewing. The scroll is hand cranked as the story is told, which can be accompanied by a song or a spoken word. This art form is starting to make a comeback hence this festival. The first annual Crankie Festival will be interactive and collaborative festival experience and is open to all ages.

Out of town acts include Anna & Elizabeth from Virginia, U.S., who almost single-handedly have resurrected the “crankie” and recently signed with Smithsonian Folkways Records; Sue Truman, an Appalachian musician based in Seattle and a respected crankie maker; Linda McRae (BC/TN), a singer/songwriter and founder of Express Yourself Writing Workshops for At Risk Youth & incarcerated Individuals; Peter Paul Van Camp — the Personable Poet, the Dimestore Rhymester, the Only Performing Poet from Coshocton, Ohio (BC) and É-T-É who were born from the meeting of three young musicians from classical, jazz and traditional Quebec backgrounds.

The full weekend schedule, ticket pricing and options and can be found on the website.

To get you and your kids “crankied,” check out the website for more information on the free Crankie Making Sessions/Workshops, that are geared towards children, and are going on from August 28 to September 17.