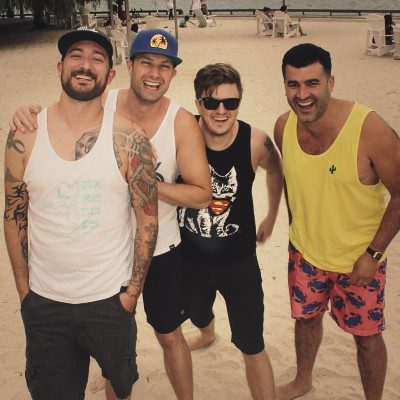 Canadian ska-punk band, Slamboni have released the perfect “end of summer” jam. “Beers in the Fridge” which was recorded, mixed and co-produced by Ian Boddy at Pirate Studios. With Labour Day weekend quickly approaching, you’re going to want to add this song to your playlist, it’s a must.

Check out the single below and find out more about Slamboni in our Five Questions With segment.

Why hello there, Canada! We are Slamboni, think of a Zamboni that breaks the ice for you. We are all originally from small towns in Canada but now all live in Toronto, so we’re a refreshing mix of campfire and skyscraper.

Slamboni is a mix of Ska, Reggae, Punk-Rock and Hip-Hop. We try to bring the So-Cal vibe to the North. We have smooth bass lines, melodic vocals while mixing in shredding leads. The drumming can be reggae style or machine gun depending on the song. We are all good friends so many of the songs come from jamming over a few pops in our downtown studio. Hazey is a great songwriter, so other tracks come from his inspirations at his home studio that he brings to the group to build on.

We’ve been described as an “all-inclusive beach resort in a band”. We always wear tank tops and shorts to our shows to bring the beach vibe no matter what the weather. We once played Horseshoe Tavern in Toronto when it was -40 out in February, and we showed up in beachwear and had the place going nuts. It was incredible. We’re playing a show in Toronto on September 21, we’re playing the Streetlight Manifesto After-Party at the Black Swan Tavern (154 Danforth Ave). We have a new song we will be recording soon about the recent tragic shootings on the Danforth we hope to debut there.

We just released a new single “Beers in the Fridge“. Even though the song title suggests good times and not much depth, there’s still a lot going on sonically. We are excited for Canada to hear it.  Feel free to have a listen on Spotify, Apple Music or Youtube.

We work with Trouble Town Records who has a bunch of bands on their label that really supports each other. Naked Wild, The Classy Wrecks and the Drops-ups are a tight family to us and they rock. Outside of that, we love the Darenots and Monster Truck.