PREMIERE – Max Parker releases video for “Out Of The Blue” 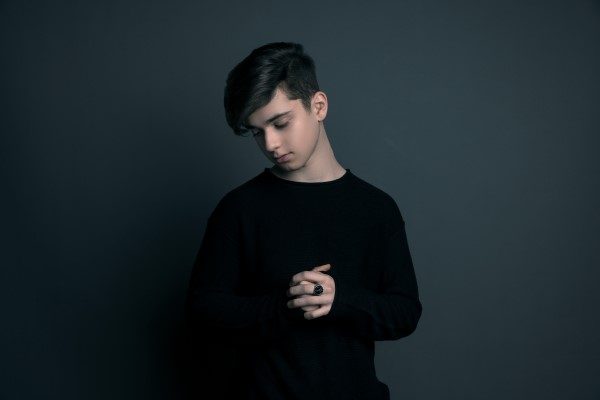 Toronto’s Max Parker could easily become the next pop star out of the city, and his newest single, “Out Of The Blue” verify’s that. The 16 year old pop artist has an immense online following, and I can certainly see why. The single is upbeat, catchy, and fun to sing along with, and isn’t that what we all love from a good track?

For the video, they filmed in various places in Toronto, Max shares on this,

“Using my favourite places in Toronto was important to me. I really do love skipping stones by the river where it meets the lake on Humber Bay beach, and I learned how to skip stones on that same beach since I was 5 years old. So I wanted that scene of contemplation in the video, hands down.”

If you’re like me, you are wondering about the meaning behind the song, so we asked Max about that,

“This song is important for youth especially during this time of communication on social media because it explains how a breakup can be so frivolous on a text message. I really wanted to capture that feeling of being blindsided because of a break up from a simple text, and how there was complete disconnect in the relationship without even knowing it, because youth sometimes get carried away with social media instead of focusing on what is happening in the moment with real people in real situations. It shows how easy it all seems to just end it without the bravery involved in showing up in person to respect the other person.

Recording this song with the story of a relationship gone wrong sends a message that personal communication is important not just at the end of relationship (any relationship) but also along the journey of being in relationship with anyone – a love interest, a family member, or a friend. That is what was, in the end, important to me to convey out to the world. “Out of the blue” is such a common saying in everyone’s expressive language when they are describing an unusual experience or happening, and so it feels ‘catchy’ and at the same time, a catch phrase that we can all relate to in our lives. “

Check out the video for “Out of the Blue” below, and find out more about Max in our Five Questions With segment.

I’m a 16-year old Canadian singer and songwriter. Ever since I picked up the guitar at age 10, I drew inspiration from artists like John Mayer, and immediately knew that writing songs felt right and special. I began performing at intimate venues in my hometown of Toronto and in the past couple of years, my music on social media and my general profile rapidly grew which has given me opportunities to perform at larger stages and venues including the Canadian National Exhibition, The Hard Rock Cafe, and the Union Summer Festival. I have been really lucky to be mentored by talented musicians along the way. This past year, I felt ready to head to the studio to record my debut EP alongside major label record producers Andre Kaden Black & Tal “Dr. V” Vaisman. It was pretty cool to have an immediate response to my single “Out of the Blue” with a pre-release that was recognized by CBC’s Searchlight songwriting competition across Canada, earning the song a spot on the country’s top 12 standout artist list.

A bit more about me? Well, my full name is Max Ciuffetelli Parker, so I’m part Italian, part Scottish/English. Culture and diversity are important to me and I try to express that through my original music.

There also have been many obstacles I’ve had to deal with, one of them has had to do with my Dad having been very ill, really near-death. As a youth/teenager trying to figure out life in general, these sorts of ‘bombs’ that drop unexpectedly isn’t just about me, but what kind of really happens to everyone. The experiences have helped me to really dig deep through writing songs, that’s the plain truth. As a teenager, I guess these sorts of experiences aren’t rare, but it can really screw up a youth’s mental health. Managing all that deep life stuff while ‘performing well’ in school, and my drama program, and my sports (i.e. tennis) programs, for me, has been a juggle. It takes a lot of resilience that I guess I’m still developing, especially with today’s mixed up world! In the end, my passion is my music and I hope my music can be a voice for youth because I really do think that we are more the same than different in our life experiences, but that we need to understand each other too, in a deeper sense. I think the art of music is one way to break through that understanding.

What do I do when I’m not ‘doing’ music? I’m just a Toronto-grown boy who loves my city, hanging with friends, shooting hoops, teaching and playing tennis by the lake – it’s all a privilege that I never take for granted. I’m lucky I have an older sister, a mom, and a dad who support me and keep me humble when I do get ahead of myself a bit! I am eager to merge my service/humanitarian work with my music in a bigger way, to really demonstrate that all youth can be giving back to the world, even when they’re making meaning of their own experiences.

I think what first inspired me to get into music was really the first time I picked up the guitar, holding it properly without being instructed, and learning so fast. My first guitar teacher told my Mom I had something ‘special’ which I didn’t really understand at all, except I was ripping through the music notebook and loved writing jingles and made every school writing assignment into a musical performance when any teacher let me! My style of music, I was told early on, is adult contemporary – I guess because I was influenced by artists like John Mayer. But I also follow all sorts of styles of music ranging from pop, rock, rhythm and blues, rap, and I have recently been so impressed with the skill set of country music artists. So, I guess I’m influenced by a mixture of genres and I think my first EP begins to reflect that. “Out of the Blue” is definitely a pop song, and it really just turned out that way because of the lyrics I wrote and the beat I wanted in the end. On the other hand, my other single “Time Machine” is melodic, with a beautiful cello accompaniment, and helps with the serious message of living life with risk, and the fear of not knowing your future.

I just performed at Union Summer a few weeks back and will be performing two shows, of all places, at the Pearson International Airport, in two of the terminals. It’s actually a  really new cool program that is run by the City of Toronto to showcase artists across the GTA. I feel quite lucky to be invited to perform. I am also in the process of developing a back-up band and I have been working with a fabulous guitarist Ben Foran, who has performed as a front-man guitarist and cellist with Ed Sheeran. Ben works with many other talented artists. Can’t get better than that for me at this time! My live performances, I hope, are engaging for audiences of all ages. I like to have a conversation with the audience (large or small) to introduce each song I’m playing whether it’s an original or some cool covers I choose that are contemporary or classic. During my last performance, there was a family visiting from Nashville and they approached me later to encourage me to go to Nashville as they believed I’d be a hit there – they were music fanatics and even named their own son “Lennon” after John Lennon! That was the greatest compliment I think I’ve ever received yet! So, I guess I hope people come to watch me play live, as that is the most exciting part of sharing my music with the world, but I hope people also love and stream my recorded music because that is a way to make a footprint of my artistry too.

Ah…that’s a hard question because I love the upbeat rhythm of “Out of the Blue” and some other hard-rock sounds of another song, which will be released later this year. But, if I had to choose one, it would have to be “Time Machine” that I’d want people to pay a bit more attention to. This song was written at a time when I was really worried about my dad’s health and all the rest of life, and I was worried and trying to figure things out for my future.  I view “Time Machine” as a ballad for youth, or anyone really who is transitioning in their life. I hope it’s a universal message.

There are so many Canadian artists that I think are so talented and skilled. Shawn Mendes is someone I have watched growing up and you can see such a huge progression from a couple of short years on how his music has risen to such a unique level. I think Justin Bieber is the poster kid for all of us younger musicians who are trying as much as possible to gain a true following through music and social media and he has paved the way for that for all other Canadians. He was an early influencer for me when I just started playing the guitar and singing. Alessia Cara, for me, represents Canadian talent at its best because of her messaging in her lyrics and her ability to go really deep with her experiences in her songs and not be afraid to share at that level. Other artists like Leonard Cohen, of course, inspire me to write more poetic lyrics and he was such a legend. There are some other up and coming artists who I admire and that I am fortunate enough to know personally, such as Jayde (@itsjaydemusic) whose music is more R&B. I think Canada truly has the best of the best when it comes to music.