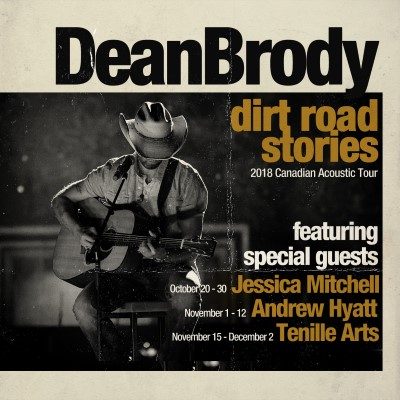 Dean Brody, who is a three-time winner of the CCMA Songwriter of the Year award, the 2017 CCMA Fans’ Choice, two-time JUNO award-winning artist and celebrated songwriter will be hitting the road beginning October 20 in Truro and ending December 2 in Cranbrook, BC for his intimate acoustic Dirt Road Stories Tour.

Brody has written many of his at his kitchen table and this acoustic tour is meant to replicate that intimate setting that inspires his original works.

“I want to give my fans a window into how my songs were written, how they sound in their rawest form, performed in an intimate theatre setting.”

The opening acts, Jessica Mitchell, Andrew Hyatt and Tenille Arts each have their own compelling stories to tell. Singer-songwriter Jessica Mitchell will join Brody on the East Coast dates, including Montreal, performing many of the tracks off her recently released debut album, Heart of Glass. Ontario-based and recent CMAO Rising Star winner Andrew Hyatt (who recently released his second Top Ten hit, “Do It With You”) will join Brody on his dates in Ontario. Saskatchewan native Tenille Arts, who was recently featured on The Bachelor, will open for Brody in Manitoba, Saskatchewan and British Columbia, providing insight into the meaning behind the songs on her debut album, Rebel Child.

The full list of tour dates is as follows: