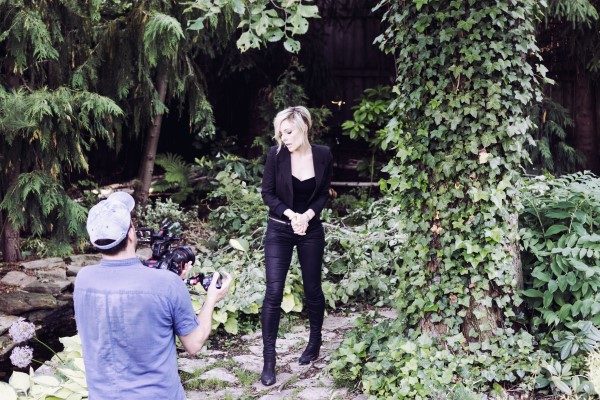 I’ve had the privilege of hearing Nova Scotia’s own Christina Martin live a few times, and I can’t wait until the next time comes around. The pop/rock artist has a voice that could be described as distinct, but also as powerful and meaningful. Her latest album, Impossible To Hold was released in March and features ten stellar tracks including this one, the title track.

Christina shares on the concept of the song,

“Many can relate to being infatuated,  daydreaming of being with someone, or having talent like someone famous, admiring their life or career from afar.  I had written 80% of the song with my head stuck in the clouds, and then took a break from the song.  While touring in the UK, I attended a Carole King performance in Hyde Park London. She performed her most cherished songs with an undeniable passion and excellence, might I add at the age of seventy-five.  The experience reminded me of the power that music has to affect people so profoundly.  That same week, I finished the lyrics to ‘Impossible To Hold’. For me, this song has evolved to be a kind of tribute to the iconic singer-songwriters that have influenced me.  One year later, while on tour again in the UK, I watched Stevie Nicks and Tom Petty and The Heartbreakers perform at the same venue.  Then back at home, we finished recording the song in our studio, and shortly after, Tom Petty was gone.  It felt like a mistake.  When I sing the song now on stage, sometimes I think of Tom and the people he reached with his music.”

The video, which was shot by Jason Levangie is brilliant. The black and white visual goes perfectly with the vocals. Sometimes, a simple video hits home so much harder, and this is the case with this particular release.

We asked Christina about the experience of working on this video,

“I adore working with Jason Levangie. He keeps me busy on set, and it feels great to work hard doing what you love with the right people.  He puts me at ease when he is directing me.  It’s all about the work.  Jason supported me from the beginning, creating my first music videos, which really helped me reach more people with my music:  Two Hearts (2008), Falling For You (2012), Take Me Back in a Dream (2015), and most recently Lungs Are Burning (2017).  Growing up, music videos introduced me to most of my favourite artists: Eurythmics, Fleetwood Mac, Roxette, Tori Amos,  Tom Petty and The Heartbreakers, The Pretenders, Cindy Lauper, and many more. When I hear certain songs like ‘Stop Dragging My Heart Around’, ‘Missionary Man’, ‘It Must Have Been Love’, I’m immediately taken back to being a kid and watching those videos on VHS.  So, to be able to make music videos, it gives me such a buzz.”

Sit back, relax and give the “Impossible To Hold” video a listen below. I can guarantee you will want to have this track on your playlist.

Share this:
Related ItemsCanadianCanadian BeatsChristina MartinEast Coast MusicEric AlperfeaturedImpossible To HoldMusic Nova ScotiaNova ScotiapopPop rockpremiereRock
← Previous Story Adyn Townes hits the road in support of “After The Fall”
Next Story → Dean Brody and his Dirt Road Stories tour brings his compelling songwriting and storytelling to venues all across Canada this fall