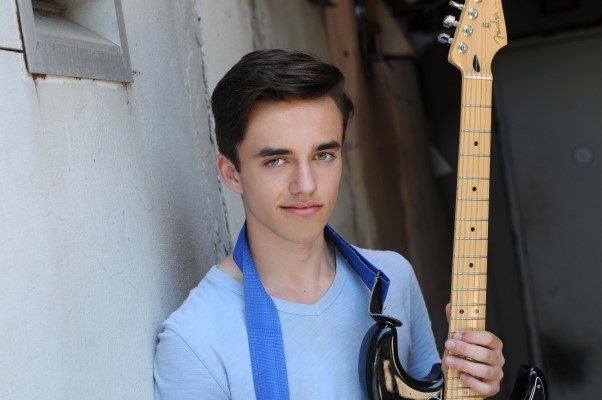 Canadian actor and musician, Kyle Meagher may only be 16, but it doesn’t show. He has mastered acting with a recurring role on the Netflix series, Anne with an E, as well as guest starring on other major film and television projects. Now, he has released his debut single, “Nowhere” and it’s clear that he is on his way up in the musical world as well. Check out the lyric video for “Nowhere” below and find out more about Kyle in our Five Questions With segment.

My name is Kyle Meagher and I’m a 16-year old musician, songwriter and actor. I have worked on many different acting projects, most notably Netflix’s show, Anne with an E. Music has been a passion of mine for many years, but my musical career didn’t kick off until recently when I was working on the television pilot, 7 Hills, where I was asked to contribute an original song for the soundtrack. I just released my debut single, Nowhere, which is now available on Apple Music, Spotify and has been playing on a few radio stations, including Radio Disney.

I always want to write from the heart. I personally prefer music with a story attached to it that allows me to understand what the artist/songwriter feels. When I write, I draw from personal experiences and bounce ideas around with other writers I work with to create the final product. I’ll pull out my guitar and we’ll come up with different concepts, rhymes and rhythms. Anything goes and often a terrible idea can turn into something great. Sometimes we get a bit off the wall, but it’s just a really fun way of doing it.

I have a show coming up in San Antonio, Texas, which will be my first show in the U.S. I’m absolutely stoked! I’m really just out there having fun because I know that if I’m not having fun, then how is anybody else supposed to have fun? I just try to relax and have a good time, and hopefully, the audience will have a good time with me.

If you were to suggest only one of your songs for someone to hear, which would it be?

My current single is my debut song, “Nowhere”. It’s a song that means a lot to me because it talks about all the naysayers in life – the negative people who tell you that your dreams are never going to happen. The song is a reminder not to listen to them and to keep working so you can turn their negative energy into something positive to achieve your hopes and dreams. I have a lot of personal experience with this – from friends commenting on what I’m doing or what relationships I’m in, to people talking about my passion for acting and music and telling me that I’m going “nowhere.” I turned this into inspiration and in the song, “nowhere” becomes the best destination. Don’t listen to what people tell you, especially when you know what’s right for you!

I am a HUGE fan of Shawn Mendes. He’s super talented, his live performances are always fun to watch, and he seems like a really nice guy. As I said before, I like when songs have some sort of story to them that gives you a glimpse into the artist’s life, and Shawn’s songs are definitely that. He just uses his lyrics in a way to let you know what he’s feeling, and I really admire that about him.