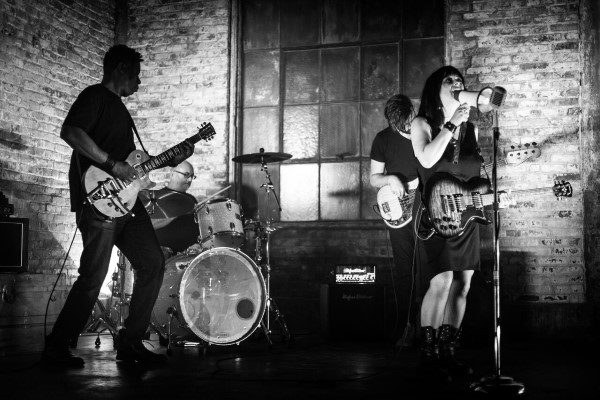 Winnipeg, MB-based musician Lindsey White is about to unveil a video for her single, “Monster” on August 23 at the West End Cultural Centre. The show will not only debut the video, but is also a fundraiser for music programs at both Children of the Earth High School (an indigenous high school with a strong cultural component, but no regular music program) and The Garrison (a free music and arts program supporting creative community engagement for all ages).

Lindsey shares on the single and video, which was directed by James Rewucki of Absurd Machine Films,

“‘Monster’ was written about my own personal journey in grieving the illness and loss of my father who died in 2009 after battling cancer… I was terrified to go into my music room for some time, where photos, medical records and my creative expression were housed. When I was finally able to start going through everything, ‘Monster’ began writing itself.”

We had a chat with Lindsey in our newest segment of Five Questions With, so now’s your chance to find out more about this talented artist.

I live and breathe music, ride motorcycles, do yoga and Tai Chi and make plants grow. I love to play any and all instruments I can get my hands on; guitar and piano are my favourite tools to use when writing songs that have been referred to as “groovy folk-rock” and

“baroque pop”. And I am usually inspired to write about anything and everything with anyone, everyone or alone.

My writing is personal, passionate. I love words and I also love when music expresses things that can’t be expressed with words! The piano was the first instrument I learned to play and I enjoy stripped down ballads as much as thick, heavy chords. I learned to rock out on guitar as a teenager and both acoustic and electric speak to me differently. My band understands this and consists of some wonderful musicians who do so much to compliment my sound.

August 23rd marks the release of my second official music video for a song called “Monster” from my last album (Renegade). A release event is also serving as a benefit for two local music programs at Children of the Earth High School (with no current, regular music program) and The Garrison (Music and Arts) which serves a similar, but greater population who lack access to arts. I’m partnering with the MCMA (Manitoba Conservatory of Music and Arts) as well as several guest artists to raise funds to support both programs and I will be sharing new music, both solo and with full band.

My live performances take the listener with me on a journey of creative expression. Of high energy songs and shameless balladry from my heart and soul. My voice is it’s own instrument and, along with the words I write, is at the heart of my art.

That’s a tough one. Right now, it would probably be Monster because I’m so excited about releasing this video. But my music is so different and the song styles are so diverse that it really depends on individual taste and maybe mood as well. There are newer songs that I’ve been really enjoying sharing live, and a ballad on the Renegade album called “Asylum” that I released my first official video for. But the title track on “Renegade” may give the most insight into how my personal story reflects into my work.