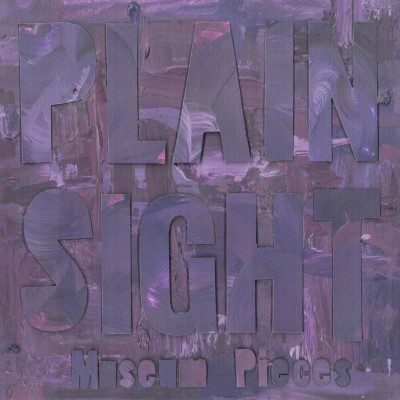 Museum Pieces is a project by Halifax’s own Tyler Messick.

Messick has a pretty impressive resume, having spent time assisting Win Butler of Arcade Fire on numerous projects (including the Grammy Winning Suburbs album). It was only after returning to Nova Scotia that Messick began to release and perform his own music once again. From this Plain Sight was born, recorded in Arcade Fire Studio’s and mixed in Halifax by Joel Plaskett.

The album begins with “Salesman”, a track with a strong piano feel. There is a very busy arrangement of instruments used to create a unique sound. This aids in creating a feeling of motion and urgency at times that give the impression of what a travelling person may feel.

“To Meet in Dreams” has a strong 60’s feel. The track is about a relationship that ended, yet the protagonist is still hung up on what once was. People are trying to convince them to move on but this is something that they are not quite ready for. You can feel the heartfelt emotion through the vocals and melody. This is definitely one of the tracks that stand out.

Another stand out track is “Keys to the Castle”. The fast pace of the guitar as it builds the intensity makes you wonder what is going to happen next. I especially enjoyed the beats of the drum that gives you a feel as if you are galloping along.

The current single is “Hitchhiking with your Photograph”. This track has a catchy tune, that leaves you wanting to sing and tap along. Towards the middle of the track, there was the addition of a dreamy, psychedelic bridge, which will capture the attention of the audience. This was a great choice to release as a single. It shows what the band is capable of producing, yet leaves you wondering what other hidden gems you may discover.

The album ends with “4AM”, a track that begins with an otherworldly feel. The addition of backing vocals adds a nice touch over the groovy feel. The tracks seems to have somewhat of a calming effect, almost as if you can picture yourself floating at times. Then Messick throws in an interesting twist – a guitar solo followed by some spoken words in the form of shoutouts and thank yous at the end of the track.

This album is worth a listen. From its unique instrumentation and relatable lyrics, it as a little something for everyone. If you’re interested in hearing more, make sure to check out Messick’s upcoming performance on August 25th at Trailside Inn in Mount Stewart, PEI.